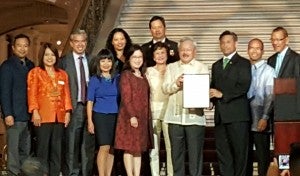 They could also have learned that the U.S. House of Representatives on September 29, 2010 and the U.S. Senate on October 5, 2011 passed concurrent bipartisan resolutions to officially celebrate October as Filipino American History Month in the United States to promote the study of Filipino American history “as a time to renew efforts toward the research and examination of history and culture in order to provide an opportunity for all people in the United States to learn and appreciate more about Filipino Americans and their historic contributions to the Nation.”

They could have read the letter of President Barack Obama, which was delivered recently on October 2, 2015 at the official White House celebration of Filipino American History Month where he expressly recognized the “struggles and victories of the many Filipino Americans who have helped shape our Nation” — the Filipinos who fought in World War II and the farm workers in Delano. 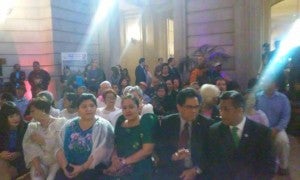 “Their legacy speaks to the extraordinary spirit of common purpose — of unity forged through the ideals that bind us together as one people — that has always been central to our Nation,” Pres. Obama said.

The October 28 San Francisco City Hall celebration was emceed by the Filipino American “Hype Man” of the NBA champion Golden State Warriors, Franco Finn, who unfortunately failed to use his sports cred to advocate for the induction of San Francisco-born Vicki Manalo Draves, who won two gold medals in platform diving in the 1948 London Olympics, into the Bay Area Sports Hall of Fame (BASHOF).

The National Federation of Filipino American Associations (NaFFAA) Region 8, led by Rudy Asercion, is pushing for the inclusion of  Vicki Manalo Draves in BASHOF after 26 years of having been snubbed and not considered worthy of inclusion in its revered list of 160 local sports heroes.

The Mayor’s Committee could have honored the last surviving Filipino community leaders who set up a food drive in San Francisco 50 years ago to support the Delano Grape Strike of September 8, 1965 when 1,500 Filipino farm workers led by Larry Itliong and Philip Vera Cruz walked out of their farm labor jobs to demand higher wages. 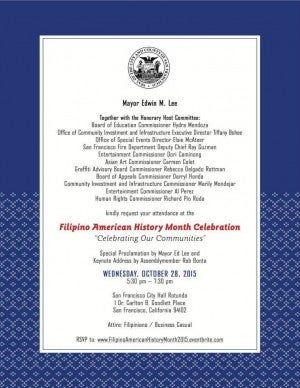 That historic strike led to the formation of the United Farm Workers Union (UFW) and, according to writer Rick Tejada-Flores, “(brought) an end to the abusive system of labor contracting. Instead, jobs would be assigned by a hiring hall, with guaranteed seniority and hiring rights. The contracts protected workers from exposure to the dangerous pesticides that are widely used in agriculture. There was an immediate rise in wages, and fresh water and toilets provided in the fields. The contracts provided for a medical plan, and clinics were built in Delano, Salinas and Coachella.”

The Filipino farm workers needed food to sustain their strike, and the 1965 “Food Caravan”– led by San Francisco-based Philippine News Publisher Alex Esclamado — provided that sustenance and forged the unity of Filipino farm workers from the rural agricultural areas who immigrated to the U.S. in the 1930s and the Filipino professionals from the cities who immigrated to the U.S. in the 1960s. That unity led to the formation of the Filipino American Political Association (FAPA) with chapters in 38 cities throughout the U.S., which advocated for the political empowerment of the Filipino American community.

The few remaining Filipino community leaders who organized that Food Caravan who are still around could have been honored at the City Hall event and finally recognized by their city for their generous act of solidarity with the Filipino farmworkers of Delano, an act that would be emulated and expanded in later years to help Filipinos in the Philippines devastated by natural calamities.

420th anniversary of the landing of the San Agustin

The Committee also missed San Francisco’s golden opportunity to commemorate the 420th anniversary of the landing of about 20 Filipino sailors in Drake’s Bay in Marin County, just 30 miles from San Francisco, on November 6, 1595. The Filipino sailors, called “indios Luzones” at the time, were part of the crew of a Manila Galleon ship, the San Agustin, commanded by Capt. Sebastian Rodriguez Cermeño, which left Manila in July of 1595 laden with a rich cargo of 130 tons of Ming Dynasty porcelain, silk and other trade goods from China bound for Europe. 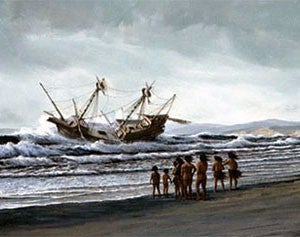 The San Agustin at Point Reyes, California, near San Francisco.

After an arduous voyage of four months crossing the Pacific Ocean, Capt. Cermeño finally sighted land and docked his ship in what is now Point Reyes and christened the horseshoe-shaped bay the “La Bahia de San Francisco,” the name that would later be given to a larger bay just 30 miles north of where they landed.

The Spanish soldiers on board his ship urged Capt. Cermeño to quickly resume the voyage to Acapulco, but he rejected their pleas as he wanted to explore the land that was not on any of their charts. As he set down to explore the land, he made contact with the local natives, the Coast Miwoks, who lived in about six villages in the area. He gave them cloths and other gifts while the Miwoks reciprocated with tokens of seeds and a banner of black feathers. 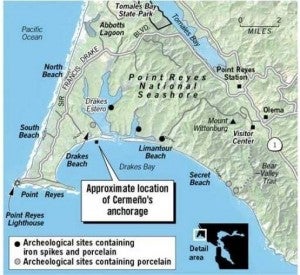 Where the San Agustin landed.

At Capt. Cermeño’s direction, the Filipino sailors assembled a small launch on the beach, a “vicoro,” a dugout canoe with planks on each side, which was used to explore the shallow waters nearby. Unlike the Filipinos with Capt. Unamuno who explored Morro Bay in 1587 for just two days, the Filipinos with Capt. Cermeño stayed at the “Bahia de San Francisco” for about three weeks. They would have stayed longer, but unfortunately a storm came, which pulled up the ship’s anchor and blew the ship to the rocks, killing a dozen men, including a priest. Unlike Morro Bay, there is no record that any of the Filipino sailors were among the fatalities.

Capt. Cermeño built a larger launch from the vicoro and sailed it out to Acapulco, which he reached without losing a man. The crew reported, however, that they had to eat their dog to survive.

The San Agustin on PBS

As to what happened to the precious cargo of the San Agustin, according to Carl Nolte (“400th Anniversary of Spanish Shipwreck,” San Francisco Chronicle, November 14, 1995), “the Miwoks picked up the cargo, slept on the silk meant for the royalty of Europe, ate from the priceless blue porcelain of the Wan Li period of the Ming Dynasty.” 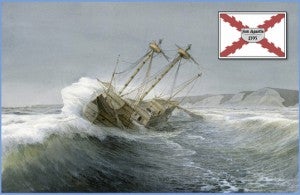 A new documentary film entitled “The San Agustin: California Shipwreck” by independent filmmaker George Thelen was aired on the Public Broadcasting System (PBS) in January of 2014, awakening new interest in the fate of the second ship to land in California with a Filipino crew.
https://www.youtube.com/watch?v=oH9Dozp2Up
Unfortunately, the 420th anniversary of this historic event was not recognized by the organizers of this year’s San Francisco’s Filipino American History Month celebration.

Perhaps next year, Mayor Lee’s City Hall event should simply be called “Philippine Culture Day” so San Franciscans will not expect to learn anything about Filipino American History and will not leave disappointed.

Read Next
Fil-Am ’48 Olympics diving champ nominated to sports hall of fame
EDITORS' PICK
DILG to stranded workers: ‘Stay where you are’ until Luzon-wide quarantine is over
BREAKING: 1,075 people in PH has coronavirus disease – DOH
Style and music journeys with Claudia Barretto
UP-PGH wards for COVID-19 patients finished in 5 days
IATF: Food firms to operate with 50% of workforce during Luzon quarantine
Cebu City closes its borders
MOST READ
Tootsy Angara bares neighbor wanted them out of village
Pacquiao to seek probe on leaked private letter from Barangay Dasmariñas
BREAKING: 1,075 people in PH have coronavirus disease – DOH
593 health volunteers sign up to fight COVID-19, says DOH
Don't miss out on the latest news and information.