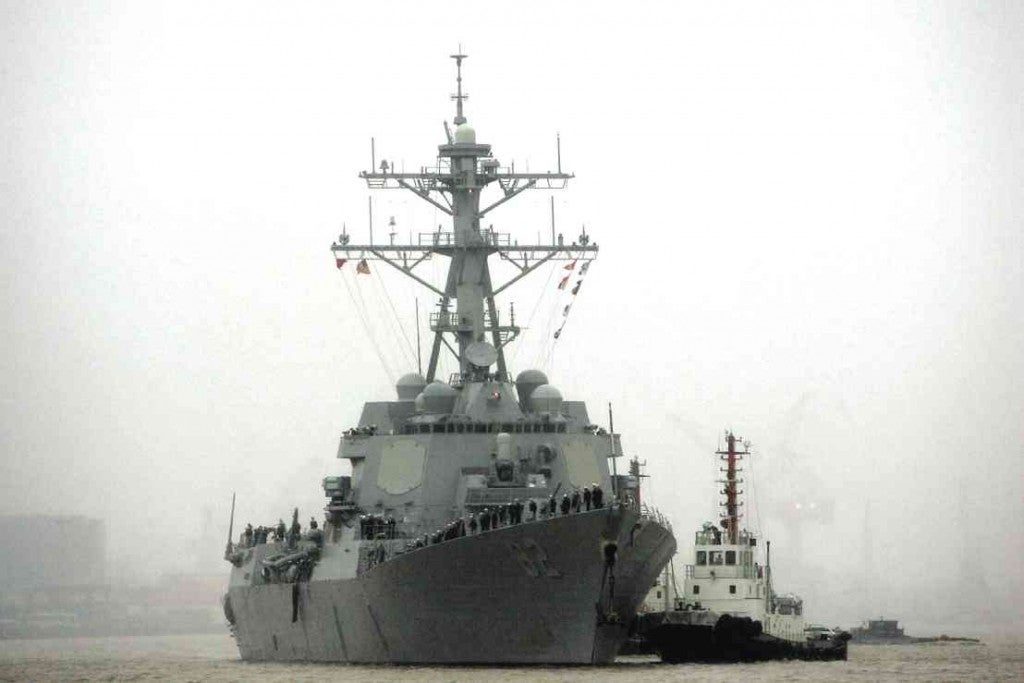 US WARSHIP IN SHANGHAI American guided missile destroyer USS Lassen, which sailed past artificial islands built by China in the disputed Spratly archipelago, arrives in Shanghai for a scheduled port visit in this file photo taken on April 8, 2008. AP

WASHINGTON—Indonesia’s president on Tuesday called for all parties in the South China Sea to exercise restraint and for China and the Association of Southeast Asian Nations (Asean) to start discussions on the substance of a code of conduct to manage tensions in the heavily disputed waters.

Indonesian President Joko Widodo was speaking in Washington, hours after a US Navy warship sailed past artificial islands built by China in the Spratly archipelago in a direct challenge to Chinese sovereignty claims, drawing an angry protest from Beijing.

Widodo, who met US President Barack Obama on Monday, did not directly refer to the US action. He said Indonesia supported freedom of navigation but also underlined his nation’s neutrality.

Indonesia has islands that may fall within China’s expansive maritime claims in the South China Sea, but Jakarta doesn’t count itself as one of the claimants to the disputed islands and reefs.

“Indonesia is not a party to the dispute but we have a legitimate interest in peace and stability there. We call on all parties to exercise restraint and refrain from taking actions that could undermine trust and confidence and put at risk the peace and stability of the region,” Widodo told the Brookings Institution think tank.

He said Indonesia, the largest nation in Southeast Asia, was ready to play “an active role” in resolving the dispute.

Asean and China have made little headway in the past decade on negotiating a binding code of conduct in the South China Sea, which is a major conduit of world trade.

China claims virtually all of the 3.5-million-square-kilometer South China Sea, while Brunei, Malaysia, the Philippines, Vietnam and Taiwan claim either parts or all of it.

Since 2013, China has accelerated the creation of new outposts by piling sand atop reefs and atolls then adding buildings, ports and airstrips big enough to handle bombers and fighter jets.

Tuesday’s sail-by was Washington’s most significant effort to demonstrate that China’s man-made islands cannot be considered sovereign territory with the right to surrounding territorial waters.

Chinese media denounced the US action on Wednesday, while netizens filled the Internet with angry diatribes, demanding a far stronger reaction from Beijing.

The South China Sea has become the stage for a burgeoning tussle between the world’s two largest economic and military powers as they struggle for regional dominance.

In the latest act, the United States sent its guided-missile destroyer USS Lassen to within 21 kilometers (12 nautical miles) of artificial islands China has built in the heavily disputed Spratly archipelago in the middle of the South China Sea.

China has built artificial islands on seven reefs in the Spratlys and constructed lighthouses on two of them, both claimed by the Philippines: Calderon Reef (international name: Cuarteron Reef) and Mabini Reef (Johnson South Reef).

The USS Lassen sailed close to Zamora Reef (Subi Reef) in the West Philippine Sea, part of the South China Sea within Manila’s 370-km exclusive economic zone (EEZ) recognized under the United Nations Convention on the Law of the Sea but which Beijing insists is part of its territory.

A US defense official said the Lassen also went within the 21-km territorial limits of Philippine-claimed Panganiban Reef (Mischief Reef), which China seized in the mid-1990s and developed into a military outpost.

In response to that Chinese action, the Philippines grounded a rusting hospital ship, the BRP Sierra Madre, on Ayungin Shoal (Second Thomas Shoal), 189 km west of Palawan province, in 1999 to mark Philippine territory in the Spratlys.

A small garrison of Philippine Marines mans the decrepit ship, which is restocked every three months using civilian vessels.

‘We will do it again’

The US Navy will send more warships, a US official said late Tuesday, telling Agence France-Presse (AFP): “We will do it again. We sail in international waters at a time and place of our choosing.”

In the run-up to Tuesday’s operation, Beijing repeatedly warned that it would take firm action against any country that violated its territorial sovereignty.

But when the long-awaited patrol finally arrived, Beijing only tracked and warned away the vessel, without intervening physically.

Falling back on a tried-and-tested formula, Beijing summoned the US ambassador to protest, denounced Washington’s actions, and made vague threats that it would “resolutely respond.”

Commentary in Chinese state media was relatively restrained, calling for China to keep a cool head in the face of American provocations.

Even the Global Times, known for its nationalistic rhetoric, issued a call for restraint, emphasizing the need for China to show moral superiority in the face of what it described as Washington’s bullying.

“The Pentagon is obviously provoking China,” the newspaper said in an editorial on Wednesday. “If we feel disgraced and utter some furious words, it will only make the US achieve its goal of irritating us.”

But Chinese netizens demanded a stronger response from the authorities, who portray China as a major global power and who have at their command the world’s largest military, an increasing point of pride.

Beijing has been ramping up defense spending for years as it works to transform its once corrupt and dysfunctional military into a well-oiled machine with an increasingly powerful naval force capable of operating far into the Pacific.

The Americans “are at our doorstep. Denouncing them again is useless,” one commentator said, reflecting the general mood of thousands of responses on social media site Sina Weibo.

A September military parade in Beijing celebrating the 70th anniversary of the World War II defeat of Japan featured a procession of military hardware, including missiles thought to be capable of targeting American warships.

Such displays have heightened popular Chinese expectations, and social media were filled with demands for decisive action.

“Can China only flap its lips?” one comment asked, before offering a more decisive reaction: “Destroy the American warships that came.”

A Chinese guided-missile destroyer and a naval patrol ship shadowed and gave warnings to the Lassen “according to law,” said China’s defense ministry.

The US patrol was a “coercive action that seeks to militarize the South China Sea region” and an “abuse” of freedom of navigation under international law, the ministry said.

China’s Navy said the “air arm” was also involved, but gave no details.

The US official said the Lassen was followed at a safe distance by a Chinese ship and no incidents were reported during the 115-km passage.

“I would expect that this becomes a regular operation in the South China Sea,” the official said. “This type of operation shouldn’t be seen as provocative.”

The official said the USS Lassen had been followed for weeks by Chinese vessels before the patrol.

The official People’s Liberation Army Daily said in a front-page commentary on Wednesday that the United States needed to learn the lessons of the chaos in places like Iraq and Afghanistan, which it said proved how a US show of force never brought stability.

“Cast iron facts show that time and again the United States recklessly uses force and starts wars, stirring things up where once there was stability, causing the bitterest of harm to those countries directly involved,” it said.

US Defense Secretary Ash Carter, testifying before the Senate armed services committee on Tuesday, initially said only that the US Navy had conducted operations in the South China Sea. But under questioning from lawmakers, he said the USS Lassen had passed within 21 km of an artificial island built by China.

It said earlier the USS Lassen “illegally” entered waters near islands and reefs in the Spratlys.

China was “extremely dissatisfied and resolutely opposed” the US actions, the ministry said.

The US state department declined to confirm the Tuesday meeting, or comment on any remarks made on the issue.

The United States says it doesn’t take a position on sovereignty over the South China Sea but insists on freedom of navigation and overflight.

About 30 percent of global trade passes through the South China Sea every year. The waterway has rich fishing grounds and a potential wealth of undersea mineral deposits.

China says it respects the right of navigation but has never specified the exact legal status of its maritime claims.

The Philippines has challenged China’s claims in the West Philippine Sea, taking the dispute to a United Nations arbitral court in The Hague for resolution.

China, however, has refused to take part in the proceedings, insisting on bilateral negotiations to settle the dispute. Reports from AP, AFP

Aquino: US patrols in South China Sea a ‘balancing of power’