US defies China in Spratlys; Warship sails by Beijing’s ‘islands’ 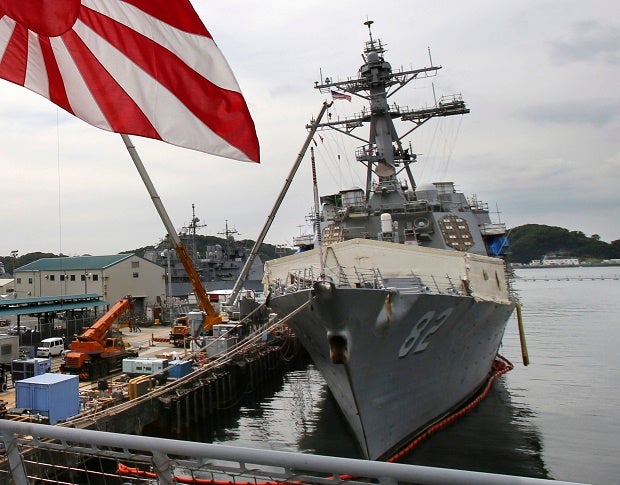 In this May 27, 2014 file photo, the USS Lassen is anchored in Yokosuka near Tokyo. AP File Photo

WASHINGTON/BEIJING—A US Navy warship on Tuesday entered disputed waters near the Spratly Islands in the South China Sea, directly challenging Chinese claims that the artificial island chain that Beijing has built in the area lies within its territorial borders.

The maneuver by a US guided missile destroyer drew an angry protest from Beijing and accusations that the move threatened US-China relations and regional peace. But the Philippines, a US ally, welcomed the move as a way of helping maintain “a balance of power” in the strategic waterway.

A US defense official said the USS Lassen sailed without a hitch within what China claims as a 21-kilometer (12-nautical-mile) territorial limit around Subi Reef, while a second official said the patrol, which lasted a few hours, also included Mischief Reef. Both reefs are also claimed by Manila as they lie within the 370-kilometer (200-nautical-mile) exclusive economic zone of the Philippines.

The second official said the US patrol would be the start of a series of challenges to China’s territorial claims in one of the world’s busiest sea lanes—a move that angered Beijing which said last month it would never allow any country to violate its territory in the Spratly archipelago where it had built seven outposts on several of its reefs, islets and atolls.

“The actions of the US warship have threatened China’s sovereignty and security interests, jeopardized the safety of personnel and facilities on the reefs, and damaged regional peace and stability,” the Chinese foreign ministry said on its website.

“The Chinese side expresses its strong dissatisfaction and resolute opposition,” the statement said.

Speaking to foreign correspondents in Manila, Philippine President Benigno Aquino III said he supported the US naval maneuver as an assertion of freedom of navigation and as a means to balance power in the region.

“I think expressing support for established norms of international behavior should not be a negative for a country,” he said. “I think everybody would welcome a balance of power anywhere in the world.”

Without identifying China by name, he said “one regional power” had been making “controversial pronouncements” that must not be left unchallenged.

“The American passage through these contentious waters is meant precisely to say that there are norms as to what freedom of navigation entails and they intend to exercise so that there is no de facto changing of the reality on the ground,” he said.

A US official disclosed that additional patrols would follow in the coming weeks and could also be conducted around islands that the Philippines and Vietnam occupy in the Spratlys. “This is something that will be a regular occurrence, not a one-off event,” the official said.

The Lassen’s sail-by fits a US policy of pushing back against China’s growing assertiveness in the South China Sea. China claims most of the oil-rich waterway, through which more than $5 trillion of world trade passes every year. The Philippines, Vietnam, Malaysia, Brunei, and Taiwan have rival claims.

Since 2013, China has accelerated the creation of new outposts by piling sand atop reefs and atolls then adding buildings, ports and airstrips big enough to handle bombers and fighter jets—activities seen as an attempt to change the territorial status quo by changing the geography.

US Navy officials earlier said the sail-by was necessary to assert the US position that China’s man-made islands could not be considered sovereign territory with the right to surrounding territorial waters.

Both Subi and Mischief Reefs—which the Philippines refers to as Zamora and Panganiban Reefs—had been submerged at high tide before China began a massive dredging project to turn them into islands in 2014.

Under the UN Convention on the Law of the Sea, 21-km (12-nautical mile) territorial limits cannot be set around man-made islands built on previously submerged reefs. The United States and several Asian nations, including the Philippines, dispute the legitimacy of the artificial islands built by China.

The United States and other countries have also voiced concern that China has built up its outposts with the aim of extending its military reach in the South China Sea. Satellite photographs had shown the construction of three military-length airstrips by China in the Spratlys, including one each on Subi and Mischief Reefs.

No need to inform China

US officials did not inform their Chinese counterparts in advance as the US Navy carried out its maneuver on Tuesday, saying that to do so would have undercut their message.

“You don’t need to consult with any nation when you are exercising the right of freedom of navigation in international waters,” John Kirby, the Department of State spokesperson, said at a news conference in Washington.

Kirby said that such a challenge to what he called a questionable sovereignty claim was “one of the reasons you have a Navy—to be able to exert influence and defend freedom of navigation on international waters.”

The Obama administration has long said it will exercise a right to freedom of navigation in any international waters.

“Make no mistake, the United States will fly, sail and operate wherever international law allows, as we do around the world, and the South China Sea is not and will not be an exception,” Defense Secretary Ash Carter said earlier this month.

The decision to go ahead follows months of deliberation and assessment of risks that could be upsetting already strained ties with China, the world’s second-biggest economy, with which US business and economic interests are deeply intertwined.

Euan Graham, director of the International Security Program at the Lowy Institute in Sydney, said a strong vocal reaction from China was to be expected, but added its military response could be muted.

“I would expect it would be diplomatically shrill in its reaction. China has also in some ways backed itself into a corner by saying it will exert its sovereignty over the Spratlys,” Graham said.

The patrol comes just weeks ahead of a series of Asia-Pacific summits that US President Barack Obama and Chinese President Xi Jinping are expected to attend in the second half of November.

Obama dropped hints of the planned US Navy maneuver at the annual meeting of the UN General Assembly last month, when he said that the United States had an “interest in upholding the basic principles of freedom of navigation and the free flow of commerce and in resolving disputes through international law, not the law of force.”

China, in what some Asia analysts interpreted as a gesture to preempt the planned US naval maneuver, sent warships into US territorial waters in August. Five Chinese ships came within 21 km of the coast of Alaska while Obama was visiting the state.

But US military officials said that the two maneuvers were not comparable, citing international maritime laws that allow passage such as the Chinese transit near Alaska if there is no other passageway for a ship to reach its destination.

In the case of the Spratly Islands, a US military official said, there were several other routes that the USS Lassen could have used, but the military deliberately chose to enter the waters that China claims as its territory.

The United States had not traveled close to the Chinese-occupied islands in the South China Sea since 2012. In May, a US Navy surveillance plane flew near three of China’s five artificial islands but did not go within the 21-km zones. Chinese Navy radio operators warned the Americans to leave the area. Reports from Nikko Dizon, AP

$100M in economic losses incurred yearly due to China’s reclamation