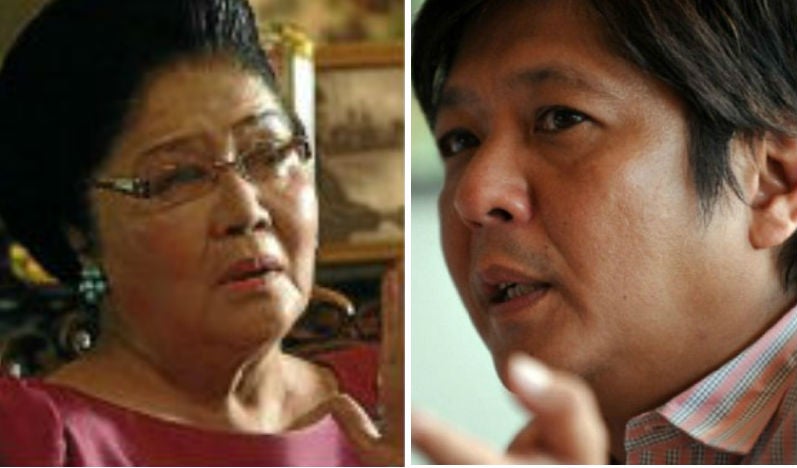 Sinabi ko na nga ba, eh. I care and care and care for you children, and this is the thanks I get?! Why don’t you just get the heaviest cross from the Manila Cathedral and put it on my tired shoulder? Put a crown of thorns on my head na rin, for being so selflessly devoted to you…

Are my words worth anything? Do you ever listen to your poor mother? How many times have I told you, children, when you draw a circle, which is your mother’s face, and you draw another circle that intersects with the first in the middle, you have a whole heart, equals Happiness.

But you, my son, you choose to draw a small x in the circle, like this, see, which makes it pout, equals Disappointment.

Ever since you were three I wanted you to become president like your father, may he rest in freeze. He would be disappointed too. We had it all planned. First you as president, then Imee becomes senator, then president after you.

But here you are, spoiling the scenario, trying only for SECOND BANANA! How will you restore your father’s good name?

Will you be able to transfer him from the refrigerator to the Libingan ng mga Bayani if you’re only vice president?

How will you protect all the honor and brilliance we have amassed.

Listen, the special spot in space that protects the Philippines from cosmic rays won’t be there forever. Climate change is  taking it away, and yet you decide to dilly dally?!

Oxford. Tapos Wharton pa. Waaah, huhuhu sniff…I only want the true, the good and the beautiful in life, is that so wrong?

Your late father became a gold trader, buying gold from Fort Knox, also finding Yamashita’s treasure, making us so rich it borders on fiction–before becoming the best president this country ever had. Why? Just so his precious only son can be a tsuwariwap backup singer?

“Hold on a second, Ma, please listen. I got it all planned out…”

Planned? A plan? Oh, I see. Oh, yes. A plan to just sit around while the President, which you should be the one, gets all the action? That’s a great plan, a plan to break your suffering mother’s heart.

“Don’t be so dramatic naman, Ma. If you’ll just let me explain…”

Oh, so I’m a drama star now ha. I should have a teleserye—“Hinagupit ng Tadhana” because that’s how it feels.

“Speaking of tadhana, Ma, it’s really destiny that will make me the president you’re hoping for. Iginuhit ng tadhana ‘yan. When I’m vice-president this is what will happen. Listen. It’s my grand strategy. Ready to hear it?”

Haber, sige nga. This better be good, or my tears will wash away all serenity from my soul. All the beauty and goodness around me. All the…

“See, Ma, winning the vice presidency is the best strategy for me. You don’t have to be responsible for anything, and you won’t be blamed when things go wrong. When I’m VP and Sen. Big Mouth You-Know-Who is in Malacanang, I’m just one terminal lung cancer away from the presidency. Gets?”

“Well, a sharpshooter’s  stray bullet just might find its way to whoever is President while he or she  is brushing his or her teeth near an open window…and tada! We’re baaaack!”

Haay, what a relief. You are your father’s son after all. A real Marcos! Here, give your poor mother a big kiss!