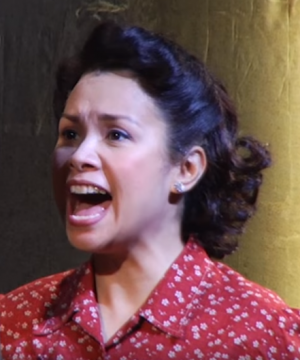 “Allegiance” is also the story of Lea’s own family. PHOTOS FROM ALLEGIANCE

She stars with George Takei and Telly Leung in “Allegiance,” a musical about an imprisoned Japanese American family during World War II.

“Allegiance” is a story extracted from the personal experiences of Takei as a child during World War II. He was only five years old when he was interned. The story is from the point of view of his parents.

“It’s very emotional,” she said during an interview at The London Hotel in New York. “How heartbroken they were and how they felt their constitutional rights were violated. The whole family was sent to a harsher camp called Tule Lake. So that’s what happened to the father.It’s based on a lot of the experiences of his parents.”

But “Allegiance” is also the story of Lea’s own family. Her husband Robert Chien is of Japanese American ethnicity. It is important, she said, that their daughter, Nicole, knows a little bit about the story of her dad’s grandparents.

She said, “I’m married to a Japanese American. My daughter [Nicole],as a result, is Japanese American…and Filipino, yes. It was never something that was ever talked about in the family so I never really knew about it,” she said.

What little she is aware of is that her husband’s grandparents fled to Colorado to escape being sent to internment camps.

“My daughter hasn’t   seen the show but I’m sure once she sees it she’ll have a thing or two to ask because this is a part of her history. And I told her this,‘Honey, Mommy is doing this because this is a part of your history too, your daddy, your great grandmother will remember.’ She’ll remember what the atmosphere was like in California when they had to flee to Colorado so this is important,” she said.

After Japan attacked Pearl Harbor in 1941, the U.S. adopted a hostile attitude toward Japanese immigrants. More than 120,000 of them, including those who were American citizens, were sent to what was known then as “relocation camps.”

“This is something that’s close to me because my husband had an uncle,I think he passed away now, who’d served on the 442. I think there were also some relatives who were interned,” she said.

The 442nd Infantry Regiment is an Army unit whose soldiers were all Japanese Americans. It became the most decorated American unit in WWII for its members’ heroism.

“’Allegiance’ is an untold American story. I read this somewhere. You see the good guys doing bad things too,” said Lea. “But history is written by the victors. But here is a part of American history that not a lot of people know that needs to be told. The government does not do everything correct, doesn’t do everything right.” 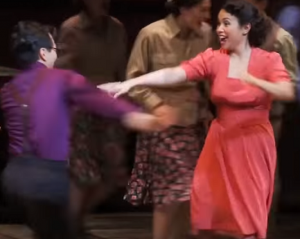 Lea in a dance number: A physically demanding production.

Technically speaking, the musical “Allegiance” is a physically demanding production, according to her. Here, she made a comparison with her highly acclaimed Broadway debut, “Miss Saigon.”

“I’ll speak for myself, I feel like I got hit by a truck when I wakeup in the morning. ‘Allegiance’ is a physical show. We’re always running around and even if you’re not onstage when you’re backstage, there’s backstage traffic, there’s backstage choreography, making sure you’re not mowed down by a set. You’re doing quick changes. You’re
getting into clothes, out of clothes,” she said.

“Miss Saigon” was vocally challenging, but at least she’s able to get a good break in between takes.

“’Miss Saigon’ was a vocal nightmare, but I had a good 15 minutes of the intermission and then I had a good 20 minutes at the front end of Act II where I wasn’t doing anything. I just sat in my room, kept myself warm.”

How Lea got the role brings the story back to how she started.

“George saw me in London. He said he’s a fan. ‘I saw you, you were a young girl in London, ‘Miss Saigon’.’ And now we get to work together. I’m like I’ve known you pretty much my whole life because Of ‘Star Trek.’ But I’m not a Trekkie by any means. I mean I’m a bit of a nerd and I’m a bit of a geek. Of course, you’ll know who Sulu is, of course,
you’ll know who George Takei is.”

In 2009, Lea went to Takei’s house, and a small assembled cast began rehearsing.

“We started to rehearse a couple of things that no longer exist in the show. And I just thought it was really, really cool to be in his home,” she recalled with pure fondness.

“Allegiance” was first staged in San Diego in 2012. It stayed there for several months, not meant to be a long-running production. It took three years to arrive on Broadway.

“I think it’s divine intervention that we waited three years. And I think it’s incredible coincidence (too).”

Lea was talking about the current political climate where the campaign to selectively marginalize immigrants considered “enemies” by the U.S. appears to now visit on the Arab American community following 9/11.

“Given the discussions on immigration and racial tensions that happen till today. If something like imprisoning 120,000 Japanese Americans, American citizens who just happened to look like the people who bombed
Pearl Harbor — if that could actually happen, who’s to say that people in this country will not be rounding up another group just because of what they look like.

“How do we know that they’re going to do this to the Muslims becauseof 9/11. How do we know? We don’t know. Because we don’t know our history.
“Many people have no idea how 120,000 people’s constitutional rights were so egregiously violated. So this piece is so important. So that people today when they watch it they’d be like ‘Oh my God this could still happen today.’ It’s a scary thing.”