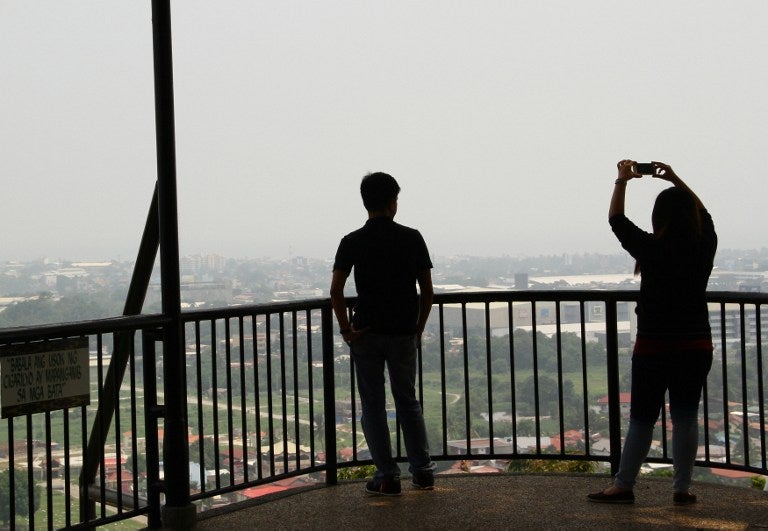 A woman takes a photo from a building of the thick haze, believed to be from Indonesia’s forest fires, engulfing the city of Davao, on the southern island of Mindanao on October 23, 2015. Smog from the fires on Sumatra island and the Indonesian section of Borneo island has begun wafting over to the major southern Philippine island of Mindanao, more than 1,200 kilometres (more than 745 miles) away, wreaking havoc on Philippine air traffic the Civil Aviation Authority of the Philippines said October 23. AFP PHOTO / Dennis Jay Santos

The southern and central parts of the Philippines have been covered by thickening haze from Indonesian forest fires, cancelling flights and putting hospitals on alert on Sunday.

Smog from Indonesian slash-and-burn farming has choked vast expanses of Southeast Asia for weeks, killing at least 10 people, forcing events to be shut down and schools to close across the region.

International efforts to douse the blazes have done little to clear the air, and Filipino authorities warned ash levels were becoming increasingly dangerous in the southern islands.

“The department of health is advising those who have breathing problems or respiratory diseases to wear face masks in areas covered by haze,” presidential spokesman Herminio Coloma told reporters.

Hospitals in the south were ready to receive anyone affected by the haze, he added.

Six flights to central and southern islands were cancelled or delayed Sunday due to the thickening smog, after thousands were left stranded over the past 10 days.

Pilots flying in the central city of Cebu could only see eight kilometers ahead, said government weather observer John Agbay, adding that visibility was also impaired in the western island of Palawan.

Indonesian forest fires are an annual occurrence, but dry weather has made them particularly bad this year and Malaysia, Singapore, Australia and Japan have all sent help to fight the blazes.

While the haze in the Philippines has been mild compared to other parts of Southeast Asia, the smoke has been largely unexpected as the islands affected lie thousands of kilometers away from the fires.

Singapore, one of the worst hit, on Sunday urged fellow Asean members to take “firm and decisive action” against ahead of a group summit in Malaysia next month.

The city-state issued the call after Singaporean troops and firefighters returned from an international assistance mission in Indonesia’s Sumatra island.

Experts say Typhoon Lando (international name: Koppu), which passed over the northern tip of the Philippines last week, may have contributed to the problem in the archipelago by dragging the smoke across from Indonesia.