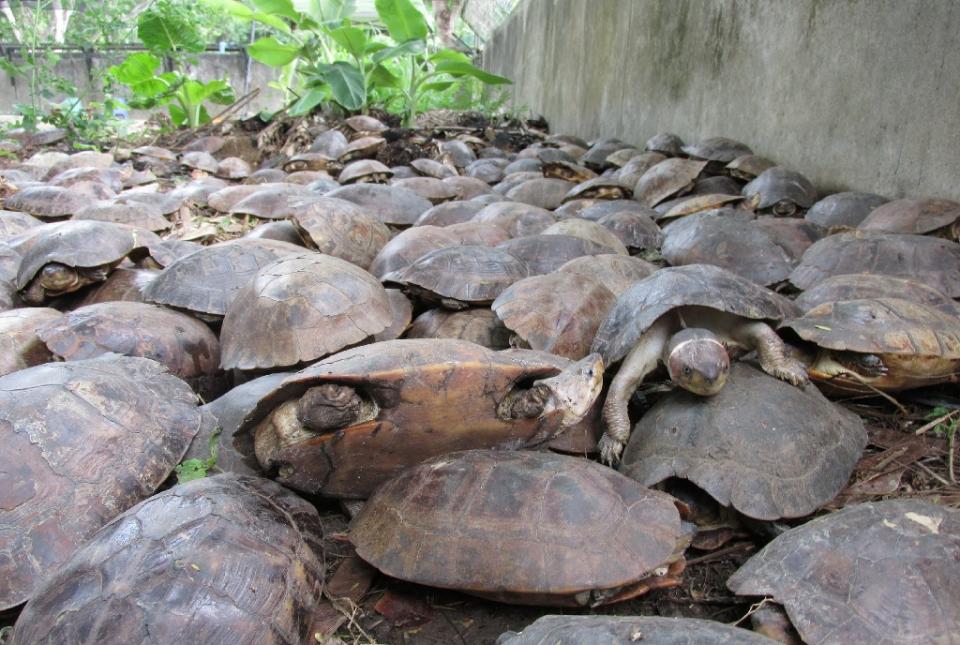 More than 4,000 live freshwater turtles and 90 dead ones were found in a pond inside a remote warehouse on the western island of Palawan four weeks ago in one of the country’s biggest wildlife rescues. AFP

The Philippine Forest Turtle, found only in the western island of Palawan, is one of numerous freshwater turtles being taken by poachers for sale to China, said Adelina Villena, chief of staff at the Palawan Council for Sustainable Development.

“They sell them mainly to the Chinese exotic food and medicine trade and the pet trade. They are smuggled out of the country, some are even traded on the high seas,” she told AFP.

The reptile, also known as the Palawan forest turtle, is listed as “critically endangered,” by the International Union for the Conservation of Nature (IUCN) and is found in forests and streams.

It has a brown or black shell and can be recognized by a light-colored stripe across its head, behind its ears.

About 20 of these rare animals were seized on October 18 among a haul of almost a thousand forest turtles collected by illegal wildlife traders in Palawan, Villena said.

She said the poaching of such turtles has increased recently with over 4,000 freshwater turtles, many of them of the endangered variety, also seized in Palawan in June.

“They are easy to find and easy to catch because they don’t move quickly. They can’t really escape.”

The crime of catching such animals is punishable by only six to 12 years in jail and is bailable, Villena added.

“The penalty is so small and the profits are so huge. That is our big problem,” she said.

The recently captured turtles have been turned over to a Palawan wildlife rescue center where they are being rehabilitated and may soon be returned to the wild.

31 rare turtles smuggled out of PH returned by Hong Kong