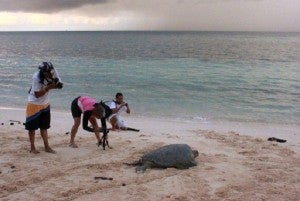 The suspected smugglers abandoned their boats and 8,500 turtle eggs when marine police gave chase in waters off Nunuyan Island in Sandakan at about 4 a.m. on Friday.

The report said Sabah Marine Police deputy commander Superintendent Rosman Ismail said Saturday that the suspected smugglers jumped into the sea and fled towards a village after their pump boats ran aground in shallow waters following a 45-minute pursuit.

“Our men managed to recover the boats and the turtle eggs,” he told the Star online.

He added that they were still looking for the two men on Nunuyan Island.

He said police believed the eggs collected from islands in Mindanao were being smuggled into Sandakan for sale at markets in the district. The turtle eggs seized had a street value of about RM12,500 ($3,937.63 or P17,0578.08).

The collection and trading of turtle eggs is banned in both the Philippines and Malaysia as part of international conservation efforts to save the endangered sea turtles.

Superintendent Rosman said they had handed over the turtle eggs to the Wildlife Department in Sandakan for further action under the Wildlife Conservation Ordinance.