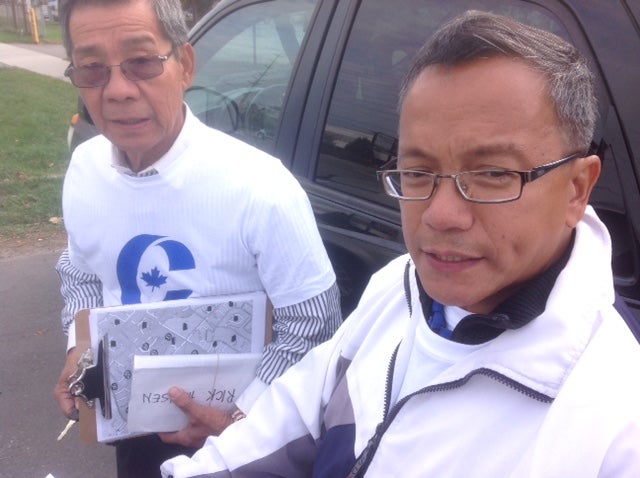 Ted de los Santos, left, and Julius Tiangson get ready to knock on doors to get the vote out on Canadian election day. PHOTOS BY MARISA ROQUE

MISSISSAUGA, Ontario–Julius Tiangson, the lone candidate of Filipino descent in Ontario during the recently conducted federal elections, failed on his first-time bid to represent the newly formed riding of Mississauga Centre as a member of Parliament.

With a total of 93 polling places–23 in residential areas and 70 in individual apartment and condominium buildings–Mississauga Centre is a vote-rich riding carved out of Mississauga-Erindale, Mississauga East-Cooksville and Mississauga Brampton-South.  From a total population numbering 118,185, there were 96,000 potential voters in the riding.

As late as the day of the election itself, hopes ran high in Tiangson’s headquarters on Mavis Road, where waves of volunteers rushed out with door hangers and postcards to door-knock neighborhoods and get confirmed supporters to go out and vote.  Tiangson himself led the army of volunteers for that last push to get voters out and off to the polls. 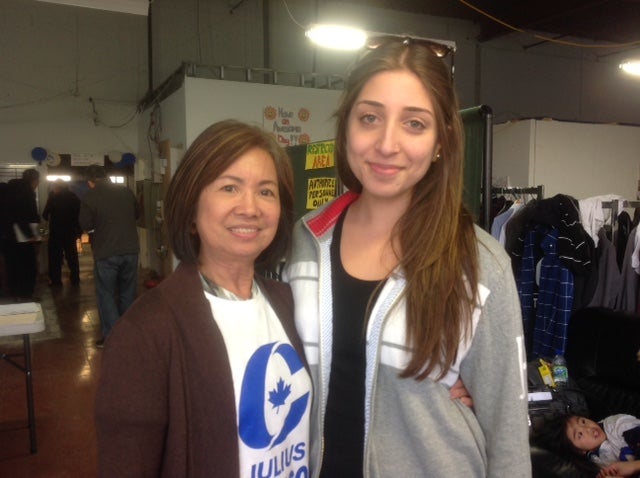 As in any election, especially in swing ridings, hordes of supporters from outside the area–and this holds true for all the political parties–were brought in to volunteer as doorknockers, “scrutineers,” poll watchers, and inspectors/tabulators.  For Tiangson’s camp, volunteers were of various ethnicities and of all ages, from school kids, to young professionals, to retirees.

Liria Tagorda from Ajax and formerly from San Ildefonso, Bulacan, was part of a group (Friends of Jesus Christ Canada) who door-knocked for more than five hours straight.  Asked why a senior would do such grueling work, the grandmother of 12 said, “Julius is a God-fearing man, honest– and he will serve with integrity.”

Jose “Joey” Torres from Montalban, Rizal, did his part to get out the vote.  As pastor of the Agape Global Community Fellowship in Don Mills and Lawrence, Joey said, “I believe in what Julius stands for–his stand on moral issues and family values resonate with me.”

Ted de los Santos from Davao City stated, “Julius is capable and qualified, he is a good speaker and debater.” 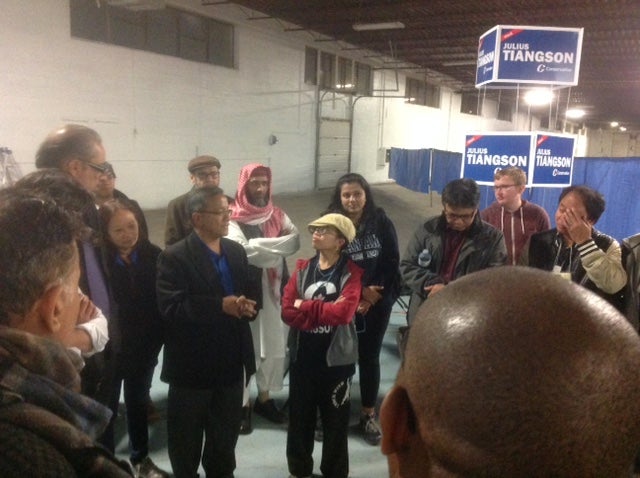 Tiangson thanking his campaigners in his election headquarters.

When the election results were broadcast on a makeshift screen, projected from a laptop in the back room of the campaign office, expectant faces became more serious.  Campaign workers held on to their clipboards, eyes glued to the changing numbers that told of ridings lost and won.

In the end, Tiangson thanked his volunteers and campaign staff for their dedication, “This is only the beginning, we have learned and we have grown.  We have formed a community and that will last for a long time after the elections are over.”

Queried on what advice he could offer anyone who seeks public office, Tiangson said, “Anybody who believes that they have something to offer should not hesitate to seek to serve.  Of course, intellectual fortitude is needed.  More importantly, one needs spiritual strength.”

Tiangson ended by thanking his family members, volunteers, supporters and campaign staff, giving special kudos to his wife Bunny for her unwavering support.