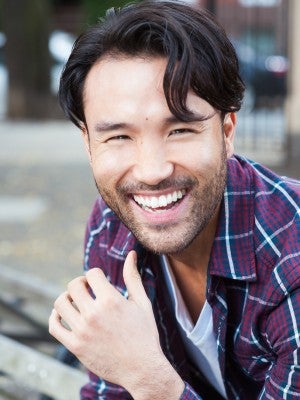 Dela Cruz made his Broadway debut last year as an understudy for the role of David, which he will now play in the tour. Menzel also starred in Wicked, Glee, Frozen and Rapp in Rent, and You’re a Good Man, Charlie Brown.

The show is from the same team that created the Pulitzer prize-winning musical Next to Normal and follows two distinct storylines in the life of Elizabeth (Menzel), a city planner who moves back to New York to restart her life and career.

The musical will play in 23 cities, kicking off in Denver and moving on to Seattle, San Francisco and Los Angeles this year. Next year, it tours San Diego, Tempe and Costa Mesa.

Born to a Filipino father and a Japanese mother, Dela Cruz was born in Hawaii and raised in Seattle, where he got his start in the industry. He was part of the world premier cast of Allegiance at San Diego’s Old Globe Theatre alongside George Takei and Lea Salonga.

Other credits include Thuy in Miss Saigon, Chip Tolentino in The 25th Annual Putnam County Spelling Bee and the national tour of Disney’s High School Musical. He originated a role in the long running stage serial Sex in Seattle and has appeared in in Pulitzer Prize winner Brian Yorkey’s Asian American rock musical Making Tracks. He made his off-Broadway debut as one of seven actors portraying Helen Keller in Transport Group’s Three Days to See.