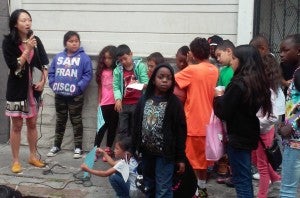 SAN FRANCISCO–“As of 5 p.m. Friday, October 9, Eviction Protection 2.0 (EP2.0) is now a law,” San Francisco Supervisor Jane Kim, the measure’s main author and sponsor triumphantly declared after it was successfully hurdled all obstacles, including an early threat of a mayoral veto, and passed into law.

“I am so excited that it is now law,” Kim said. “It is the strongest tenant protection legislation San Francisco has passed in years. It is going to protect hundreds of seniors, families and immigrants that are facing evictions from their homes, including many Filipino households in San Francisco. It is going to give people a fighting chance to stay at their houses in the city they love.”

The July 2015 Housing Balance report pointed out that San Francisco added 6,559 affordable housing units between 2004 and 2014 but lost 5,470 rent-controlled apartments due to a variety of no-fault evictions allowed by state law.

Kim was quick to share the glory with the tenant community and advocates who joined rallies held before the measure was considered by the supervisors, but also attended the hearing where tenants shared the hardships, troubles and heartaches and swung the votes in their favor. 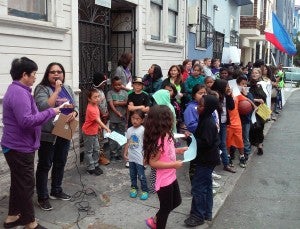 Angelica Cabande, organizational director of the South of the Market Community Action Network (SOMCAN) rallying tenants and their kids against eviction

“In this regard, West Bay Pilipino and its community partner SOMCAN (South of Market Community Action Network) will be coming out with Tagalog-English workshops, a booklet and informational video in Tagalog and English to make sure our kababayan in San Francisco are well-informed of their new rights under Eviction Protections 2.0,” Araullo announced.

Last July, young students, South of the Market tenants, members of cause-oriented groups and other advocates fought and prevented the attempts of Evan Matteo and Big Tree Properties to evicts tenants from an apartment building.

Buoyed by their victory and with momentum going their way, the tenants pushed for the approval of EP 2.0, a comprehensive set of provisions added to the San Francisco rent control ordinance to correct loopholes and upgrade existing eviction laws.

Rally leader Angelica Cabande, organizational director of the South of the Market Community Action Network (SOMCAN), called for tenant protection from landlords who were harassing tenants by finding little loopholes and minor things.

“We have to continue fighting not just for the tenants of Natoma but for the whole South of the Market, the whole San Francisco, the whole Bay Area. We need to protect tenants rights,” Cabande emphasized

“It was really hard. I didn’t think it was going to pass. But our tenants organized came in and shared their stories and at the end of the day, we got the votes that we needed to pass it. Parts of the legislation was 11-0, parts of it was 7-4,” Kim reported.

Araullo, for her part, also credited Kim’s strong advocacy for the populations she serves, which includes the Filipino community in San Francisco, who are also victims of evictions.

“I attribute the approval of EP 2.0 to a realization by Mayor Ed Lee and the San Francisco Board of Supervisors, especially Supervisor Jane Kim, that there are very few tools to help vulnerable populations stay in San Francisco in the face of developments being built for new wealthier people,” Araullo state.

Kim also noted that although San Francisco Mayor Ed Lee did not sign the measure, he allowed it to become law by not vetoing it, choosing instead to write a letter about his thoughts on the proposition. 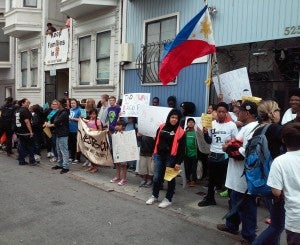 Lee indicated in the letter that while he was in support of most of the provisions of the proposed ordinance, “one particular provision does not reflect the right approach when it comes to property owners’ rights to set occupancy limits for their own apartment buildings.”

“I think Mayor Lee’s past history as a housing advocate who helped Filipinos from being evicted from the International Hotel might have been a factor in his decision not to veto the legislation. He didn’t sign it because he wants the Rent Board to clarify certain provisions–but he still did the right thing by letting it pass,” explained Araullo.

Nevertheless, Kim noted, ”The community was thrilled. It was a huge victory. Tenants are going to have a fighting chance to stay in their homes now and hopefully we will dampen instances of evictions too. The restrictions are all enumerated in the resolution.

“The country is looking at San Francisco to set the stage for solutions to these regional and national issues,” said Maria Zamudio, executive director of Causa Justa:Just Cause, one of the lead advocates for EP 2.0.

“The Mission district is ground zero for the displacement of thousands of San Franciscans due to the rapidly growing inequality in our City. But today, we celebrate because the advocacy and tenacity of the tenant community has resulted in the passage of one of the strongest tenant’s rights laws in the state. Today, the people won,” Zamudio declared.

Elderly, young prohibited to go out in MGCQ areas except for essentials, work