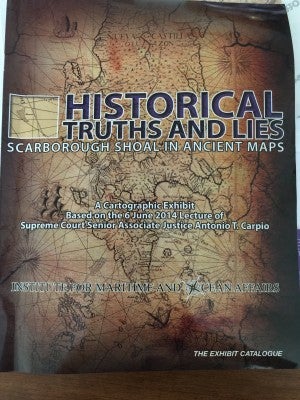 A cartographic exhibit on the West Philippine Sea dispute with China opened October 13 at the Philippine Center/Philippine Consulate in San Francisco. PHOTOS BY ESTHER MISA CHAVEZ

A lecture followed, with Justice Carpio speaking on the “Historical Truths and Lies” about sovereign rights over existing shoals, islands, islets and rocks in the West Philippine Sea/South China Sea. He based his conclusions from maps done by cartographers as far back as 1136 A.D. 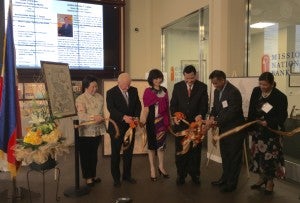 However, Carpio made the disclaimer that his “views in this presentation are the personal opinion of the author and do not necessarily represent the position of the Philippine Government.”

The Q&A that followed included Cuisia and Bensurto, the Philippines’ lead legal counsel on the maritime dispute between with China.

Carpio said, “Historical facts are not relevant in determining present-day maritime claims. However, even if we take into account historical facts, China’s claims are still without basis. Ancient maps of China made by Chinese authorities, Chinese individuals or foreigners, and ancient maps of the Philippines made by Westerners, Philippine authorities or individuals, vividly contradict China’s claims in the South China Sea.” 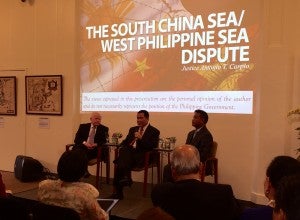 A panel discussion with Ambassador Cuisia, Justice Carpio and Consul General Bensurto followed the opening of the exhibit

The 59 maps on exhibit can be viewed at the newly refurbished Kalayaan Hall of the Philippine Center at 447 Sutter Street, San Francisco for the next two weeks. The maps are now part of the consulate’s permanent collection. For more information email: [email protected]

The Institute for Maritime and Ocean Affairs, Inc. (“IMOA”) is a private, non-stock, non-profit corporation organized to conduct research, studies and fora on maritime and ocean affairs of the Republic of the Philippines, and publish and disseminate the results of such research, studies and fora through various media, including the hosting of a website for this purpose, for general information, advocacy and educational purposes; to engage the public and encourage participation in discussions regarding maritime and ocean concerns to provide valuable resource and feedback to policy makers, lawmakers, scientists, academicians, researchers and other interested parties.

The IMOA website (www.imoa.ph) aims to reach and engage the public, and encourage wider participation in the shaping of public opinion, national policy and strategy. Email: contactimoa at imoa dot ph.