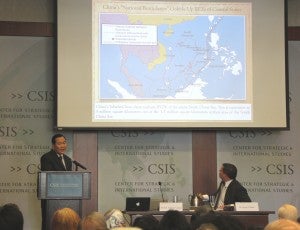 “Will the world community allow a single state to rewrite the Law of the Sea, so this single state can exercise indisputable sovereignty to almost an entire sea, subject the high seas to its sovereign jurisdiction, and seize large areas of other coastal states’ EEZs (exclusive economic zone), which are their legal maritime entitlements under both customary international law and UNCLOS?” Carpio asked during his lecture on China’s nine-dash line claim and the South China Sea dispute at the Center for Strategic and International Studies (CSIS).

“Maritime security and the South China Sea will continue to impact US-China relations and China’s relations with its neighbors. We are pleased Justice Carpio’s speaking tour in the US kicks off today at CSIS. His thoughts will certainly enrich the discourse on what has been characterized by Professor Michael Tkacik of Stephen Austin State University as possibly the single most important dispute in the world today,” Ambassador Jose L. Cuisia, Jr. said in his remarks.

According to Carpio, China’s national boundaries under the nine-dash line have effects not only on the Philippines, but also on other countries in the region and the world.

Through the nine-dash line, China claims the high seas, which, under international law, are considered global commons. Any country in the world, including those that are landlocked, can exploit national resources in high seas, hence, the entire world is affected by China’s expansive claim, Carpio explained.

The Justice reiterated that activities by China to enforce the nine-dash claim violate the 1982 United Nations Convention on the Law of the Sea (UNCLOS) and the 2002 ASEAN-China Declaration on the Conduct of Parties in the South China Sea. Such activities threaten peace, security and stability in the region, he argued.

In 2002 China, along with member countries of the Association of Southeast Asian Nations agreed that the South China Sea dispute shall be resolved “in accordance with universally recognized principles of international law, including the 1982 UN Convention on the Law of the Sea.” 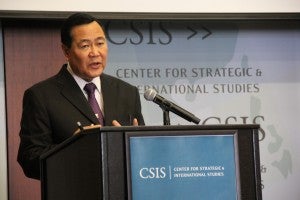 Eleven years later, China has begun insisting that historical facts be accepted as additional basis of its claim.

“After the Philippines filed in January 2013 its arbitration case against China under UNCLOS, China’s Foreign Minister Wang Yi declared that the South China Sea dispute should be resolved in accordance with historical facts and international law,” said Carpio.

However, according to Carpio, the nine-dash line has no historical basis.

Official and unofficial maps of China from 1136 during the Song Dynasty until the end of the Qing Dynasty in 1912 show that the southernmost territory of China has always been Hainan Island.

Hua Yi Tu, a Chinese stone map from the 12th century, excludes disputed islands in the South China Sea from China’s territory. The 1986 Huang Chan Zhi Sheng Yu Di Quan Tu or The Qing Empire’s Complete Map of All Provinces shows that Hainan Island was a part of Guangdong Province and became a separate province only in 1988.

The 1734 Murillo Velarde Map shows Scarborough Shoal and some features in the Spratly Group of Islands as part of the Philippines. The Islas Filipinas, Mapa General Observatorio de Manila published in Washington, D.C. in 1899 by the U.S. Coast and Geodetic Survey shows Bajo Masinloc, which also refers to Scarborough Shoal, as Philippine territory.

According to Carpio, the Philippines has not only historical basis for its claim to Scarborough Shoal, but also legal basis.

Will stand by Tribunal

The visiting Justice ended his lecture by reiterating that the Philippines will stand by UNCLOS and the ruling of the Arbitral Tribunal with regard to the maritime dispute.

Washington, D.C. is the first stop of Carpio’s U.S. tour to conduct lectures on the South China Sea/West Philippine Sea dispute. He will bring the lecture to New York City and San Francisco in the next few days.