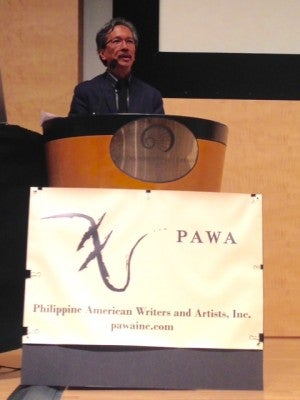 SAN FRANCISCO– “How far have we come as a community of Fil-Am writers and artists? What is our direction for the future?” These were the burning questions that the third biennial Fil-Am International Book Fest tackled from October 2 to 4 at the San Francisco Main Public Library.

The event was held in conjunction with the celebration of Filipino American History Month, observed every October nationwide. On October 2, the White House hosted its first celebration of this occasion, attended by a number of Filipino community leaders, among them authors.

During the weekend, Filipino writers and artists from the Philippines, Canada, United Kingdom, and United States gathered in San Francisco to participate in panel discussions, presentations, readings and lectures at the Main Library and the Asian Art Museum. Purveyors of Filipiniana featured the latest books from the Filipino diaspora.

Gemma Nemenzo, editor of the online publication Positively Filipino, created the festival in 2011 and had passed the baton to Edwin Lozada, president of Philippine American Writers and Artists, Inc. (PAWA). This year’s theme was “Bukás na Bukas: An Open Tomorrow, [email protected] Literature in the 21st Century.” Lozada explained, “As mindful artists and writers, we take into account our past as we create in the present. As we advance into the future, we search for paths to expression and perhaps innovation.” 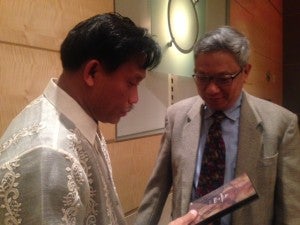 Author Nic Tiongson presents a DVD of the film based on his book “Women of Malolos” to Consul General Henry Bensurto, Jr., closing speaker at the book fest.

Co-sponsored by PAWA, the San Francisco Main Library, the Library’s Filipino American Center and the Philippine Consulate, the book fest also attracted a number of community partners, who signed on to support the festival. The Library has hosted the event from its inception, and the Consulate General has co-hosted, besides the book fest, other PAWA cultural and artistic endeavors.

On Friday, October 2, at 2 PM at the Koret Auditorium, author Nic Tiongson presented the musical docudrama “Ang Kababaihan ng Malolos,” adapted from his 2004 book The Women of Malolos, based on historical events in Malolos, Bulacan, in the late 1800s.

In 1888, a group of 20 women from prominent families in Malolos, Bulacan, who desired to achieve literacy in Spanish, boldly presented a letter to the Spanish governor-general requesting a night school. Despite resistance from local priests, the women succeeded in opening their school, an unprecedented event that prompted national hero Jose Rizal to write his famous Letter to the Young Women of Malolos. Although the school closed after a few months, due to the persistence of the reactionary friars, the women continued their reformist cause, playing an active role in supporting the revolutionaries during the Philippine-American War. The film showing, co-sponsored by PAWA and FACINE, was free to the public.

The next two days offered a rich and diverse program consisting of panel discussions on Fil-Am arts, literature and history, creating writing communities, and Philippine diaspora and politics, as well as readings by authors of new fiction and non-fiction books for adults and young readers and poetry slam performances.

Also, crowds attended gallery talks on Philippine textiles at the nearby Asian Art Museum, where the ceremony to officially open Philippine American History Month in the Bay Area was held.

During a panel discussion on Fil-Am literature, educators expressed the difficulties in keeping Filipino American and Philippine studies courses in the curriculum because of lack of interest from students or school administrators and explored ways to resolve them.

There was excitement in a discussion on Fil-Am history because of recent efforts to document early Filipino union organizing, including the grape strike in the 1960s, where Filipinos played a leading, yet forgotten, role.

Candy Gourlay, nee Quimpo, a former journalist in the Philippines who now lives in the United Kingdom, emphasized the need for diversity in children’s books. Her second novel Shine has received excellent reviews.

Philippines-based authors Dean Francis Alfar and Nikki Alfar spoke on the recent trends in Filipino literature, focusing on the growing popularity of speculative fiction, a genre that encompasses fantasy, horror and science fiction.

Together with other experts in the field, Patis Tesoro, a pioneer in the revival of the piña industry in the Philippines, gave a presentation on Philippine textiles at the Asian Art Museum. 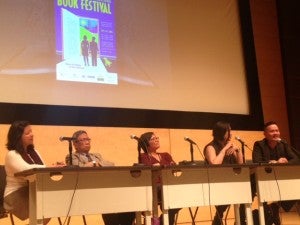 Inspired by the 1986 People Power Revolution, Tesoro became a social activist and a passionate advocate for preserving the piña, the delicate pineapple fiber used for the native barong, and promoting employment for women weavers in Aklan and Laguna. Also at the Museum, she and San Francisco designer Anthony Cruz Legarda gave a talk on the Hinabi Project’s exhibit “Piña: An Enduring Philippine Fabric,” which ran from September 24 to October 11.

True to its theme, the book fest offered something for everyone — from children to the millennials to the baby boomers and beyond — giving participants a glimpse into the present and future of Fil-Am literature and arts.

On the last day of the book fest, Consul General Henry S. Bensurto Jr. underscored the importance of the literary event by stating, “The book festival has far ranging impact as it facilitates connectivity of our culture with others and helps in the empowerment and continuity of our community.”

Lozada, enthused that the book fest had received tremendous support from organizations, schools, and other institutions, stated, “Fil-Am writers and artists are more vibrant than ever, creating, performing, publishing, and being seen and acknowledged more and more by the mainstream.”

He added, “The book fest is unique in the country and creates an opportunity for the community to know and learn about our writers and artists.”

Based on the wide-ranging and compelling topics covered in this year’s gathering and positive response from participants, organizers are already looking forward to a bigger and even more dynamic 2017 book fest.