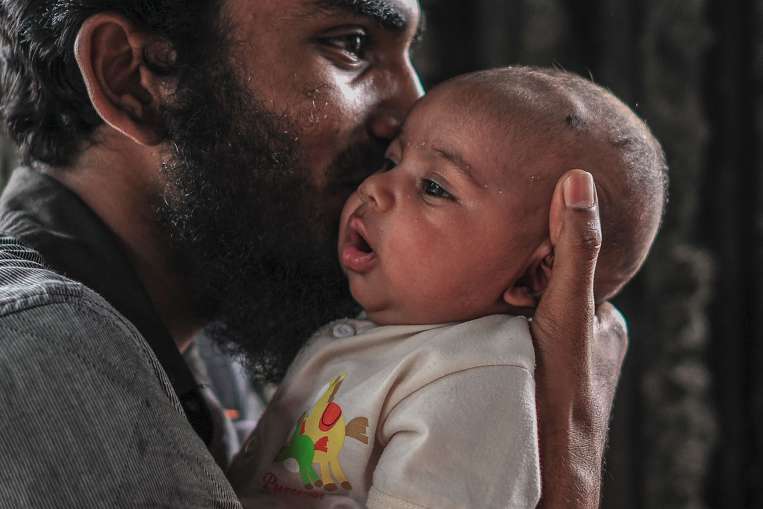 A Rohingya man holding his daughter while waiting near the United Nations High Commissioner for Refugees (UNHCR) office in Kuala Lumpur in August. A rumour about refugee status cards being issued by the UNHCR saw hundreds of Rohingya refugees throng the office, local media reported. AFP

Crackdowns in Thailand and Bangladesh have disrupted the people smugglers who prey on Bangladeshis and Rohingya from Myanmar – but the effect may be temporary and the region must prepare for more boat people over the next six months, migration experts say.

Assessments vary on how many boat people will turn up but the consensus appears to be fewer than the many thousands estimated to have taken to the sea late last year and early this year.

Yet the potential cannot be underestimated. The Rohingya, most of whom are essentially stateless, still face a dead end in Rakhine state and are likely to take to boats over the coming months. And a regional task force to tackle the issue of boat people has yet to be set up.

Earlier this year, thousands of Bangladeshis and Rohingya Muslims from Myanmar arrived starving and often ill from disease, aboard ramshackle boats on the shores of Thailand, Indonesia and Malaysia.

And Thailand uncovered a brutal people-smuggling industry, with human remains being dug out of remote jungle graves near the border with Malaysia. Migrants had been kept in squalid jungle camps while smugglers demanded money from their families for their release and onward journey to Malaysia, the preferred destination. Graves were found on the Malaysian side of the border as well.

Thailand, still languishing on the bottom rung of the US State Department’s annual Trafficking in Persons (TIP) report, launched a wide investigation and has arrested at least 22 people, including a senior army general.

Bangladesh was also embarrassed, and in its own crackdown has arrested dozens, including an alleged human trafficking “godfather” in August.

Around half of those on the boats that arrived this year were Bangladeshis. Many have already been repatriated to Bangladesh. A new labor agreement being hammered out between Bangladesh and Malaysia will likely ease the flow of Bangladeshis, migration analysts say.

But among Rohingya in Myanmar’s Rakhine state, there is wide anxiety. Four Bills tabled by Buddhist nationalists, and recently passed, are essentially aimed at Muslims. Also, Rohingya, previously allowed to vote, have been disenfranchised and will have no representation in Parliament. After the country’s Nov 8 election they may face a state assembly dominated by Arakanese or Rakhines, with whom there is long-running animosity. Rohingya make up about 60 per cent of the state’s population of 3.2 million.

About 140,000 Rohingya refugees live in camps for the internally displaced and during the past two years, some 10 to 12 per cent of the Rohingya population have left the state, mostly on boats bound for Malaysia. The trip costs them up to US$2,500 (S$3,500) each.

There was contradictory information on embarkations in Rakhine state, she said. “If they have embarked, it is in very small numbers compared to the same period last year. The number of boats leaving before the election will be small.”

However, experts say the smuggling networks have been disrupted but not dismantled, and the demand for the sea voyage remains. There may be an exodus after the election, Ms. Lewa warned.

Malaysia has an open-door policy towards Rohingya migrants, but baulks at hugely publicized mass arrivals by sea. Thailand’s policy is to detain them, or facilitate their journey to Malaysia. There are around 1,000 Bangladeshi and Rohingya people in detention or in shelters in Indonesia; around 600 in Malaysia; around 860 in Thailand, including groups detained before 2015; and a few in Myanmar.

Bangkok-based Ms. Amy Smith, executive director of human rights organization Fortify Rights, said countries in the region were not preparing the way they should.

“The focus must be on protecting these people. What they need to do is step up search and rescue and provide shelter for those arriving. We don’t see any of that,” she told The Straits Times. “There is a lot of uncertainty. But that the boats will be coming is beyond doubt.”

Palace firm on turning away ‘boat people’ from Myanmar, Bangladesh