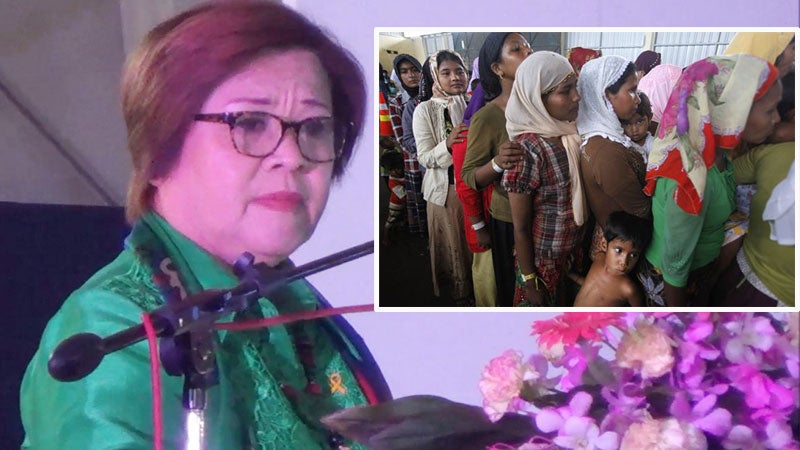 The Philippines is ready to shelter “boat people” from impoverished Bangladesh and Myanmar should the migrants’ boats land on Philippine shores, Justice Secretary Leila de Lima said on Monday.

“A process is in place to accord the protection of the Philippine government to genuine asylum seekers,” De Lima said.

“If there are boat people who come to us seeking the protection of our government, there is a process, there are existing mechanisms on how to handle these refugees or asylum seekers. So it’s not accurate that we will not help them just because they are undocumented. Their situation is indifferent and they should be treated differently,” she said.

A Malacañang official earlier said that migrants with no valid travel documents would be turned back and won’t be allowed to enter the country.

De Lima said boat people could be victims of persecution.

“In their desperation to leave the territory where their life or freedom has been threatened, or their human rights have been seriously violated, they even become willing victims of human smuggling,” she said.

De Lima described the “boat people,” reportedly as many as 6,000 drifting at sea, as “a humanitarian crisis that calls for humanitarian measures to meet the challenges of countries to whom they may ask for help.”

She recalled the Philippines had its share of hosting asylum seekers in the past even before it became a signatory to the 1951 Convention that was adopted on July 22, 1981. During World War II, the Commonwealth government provided asylum to 1,500 Jewish refugees who had been denied asylum in other countries.

The Philippines also hosted “boat people” fleeing South Vietnam after the communists emerged victorious and overran the capital Saigon in the 1970s. The refugees were processed in Bataan prior to their transfer to permanent resettlement sites in other countries.

“Asylum seekers cannot always be expected to obtain travel documents, particularly where the agent of persecution is the state. Hence, their situation deserves to be treated and examined in a different context,” De Lima said.

Human rights group: PH puts ‘boat people’ to death by turning them away