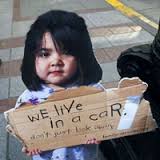 PALO ALTO, California — More than 10,000 transitional-age youth (ages 18 to 24) and nearly 1,000 unaccompanied minors (up to 17 years old) were living in places not meant for human habitation, such as cars, parks, abandoned buildings, transit stations and on streets.

California has the second highest rate of homeless youth in the country and ranks 48th out of 50 states in addressing the issue. For example, two-thirds of California counties lack shelters for homeless youth.

This disturbing situation was found out during the 2015 national “Point-in-Time” homeless count in January, reports the Lucile Packard Foundation for Children’s Health kidsdata.org.

For the past ten years, the U.S. Department of Housing and Urban Development has required communities receiving federal funding for homeless prevention programs to conduct an annual count of homeless individuals within one 24-hour time period.

Although critical to enhancing an understanding of the severity of this issue, the count of unsheltered homeless children and youth likely does not reflect the true extent of youth homelessness in California communities.

Homelessness contributes to a range of mental and physical health risks as well as academic challenges for children and youth.

According to the Lucile Packard Foundation for Children’s Health, policies that can help alleviate youth homelessness include: identifying families at risk of homelessness; offering housing support services to help families remain in their homes; explicitly addressing the needs of homeless students in Local Control and Accountability Plans; providing employment and job training for parents and youth; connecting youth to trustworthy adults and/or support organizations.