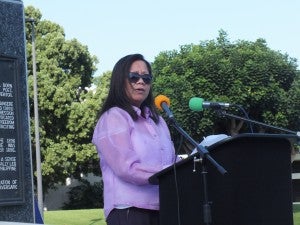 ROSELYN ESTEPA IBANEZ, co-author of Filipinos in Carson and the South Bay delivers keynote address at the celebration of Filipino American History Month in the City of Carson. PHOTOS BY FLORANTE IBANEZ

CARSON, California — The City of Carson boasts that it was the first city to formally recognize and declare every October 25 as “Larry Itliong Day” in honor of the labor leader’s birthday. It has also long observed October as Filipino American History Month.

Last Saturday, October 3, with the Filipino and American flags fluttering in the morning breeze beside the statue of Jose Rizal at the Carson Community Center, Mayor Pro Tem Elito Santarina welcomed dignitaries and community leaders to start the month-long celebrations.

Longtime community activist and author of Filipinos in Carson and the South Bay Roselyn Estepa Ibanez (who is married to this reporter) delivered the keynote address, recalling her own life as part of an immigrant U.S. Navy family. She recalled not being encouraged to speak any Philippine dialect.

Her father, a proud U.S. Navy man, had her stand up on a table in the local Filipino barbershop at age five to recite the pledge of allegiance, to show off her unaccented English-speaking skills. Like most immigrant parents, her parents wanted their children to quickly assimilate into mainstream America, get an education and a good career to have a better life. 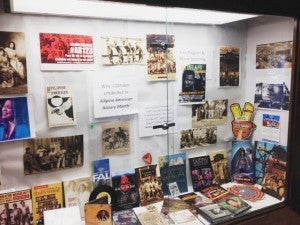 Ibanez narrated the waves of immigration, starting with youthful pioneering plantation and cannery workers and student pensionados from the early 1900s, and even earlier, enterprising Manilamen who jumped ship from Spanish galleons and established the first settlement in the Bayous of New Orleans as early as the 1700s.

Next came WWII Veterans who had to petition to be able to join the U.S. Army at the outbreak of the war and who eventually brought back war brides and started families and communities in cities near military bases, like San Diego, Alameda and Long Beach in California.

After the 1965 change in U.S. immigration policy, the floodgates opened, allowing the yearly arrival of 20,000 Filipino professionals and skilled workers, which included nurses, engineers, accountants and other technicians as well as allowing for family reunification.

But there were challenges along the way. Ibanez quoted Johnny Itliong, son of the labor hero, Larry Itliong, “My father came to this country when he was only 15 years old, because American was the land of opportunity. Once he came there were many hardships and injustices as to how they were treated. Just after one year in America, my dad was striking and picketing for better working conditions in the lettuce fields of Seattle. My father taught me how to be a good man, to be a good leader and to be a good father.”

She also told the story of a more recent immigrant in the 1970s, her friend Carolyn Ojeda-Kimbrough, who recently retired as a California State Fullerton professor of Asian American Studies. Ojeda-Kimbrough recalled not knowing anybody but her family when she first arrived she believing that Filipinos had only arrived after 1965. That is until she met a young Filipino American whom she at first believed was just being snooty because she did not speak Tagalog, whom she believed was just being snooty, but who instead educated her on Filipinos’ long history in America. It changed her life.

“I was lucky I came in the ‘70s when many of the manongs were still alive,” Ojeda-Kimbrough later recalled. “I met Philip Vera Cruz and many of the leaders of the UFW and learned their history with racism, discrimination, anti-miscegenation, their struggle for equality. I had the benefit of learning directly from their stories. The manongs are gone now but their stories have not been forgotten. I became a college professor who would teach the new generation of Filipino Americans of their history in this country.”

Ibanez urged attendees to continue learning from the stories that make up the collective Filipino American experience. “There are many untold stories to be told, there are many books to be written and to be read. There will be many histories to be made,” she concluded. 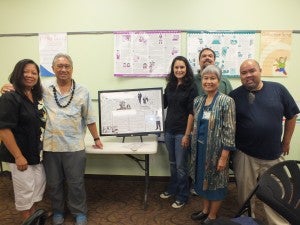 The event featured book talks from the authors of Filipinos in Carson and the South Bay and Hawaiians in Los Angeles as well as film screenings of “Delano Manongs: Forgotten Heroes of the United Farm Workers” and “American Aloha: Hula Beyond Hawaii.” Both films have previously been show on PBS. Attendees acknowledged that they all learned something new that day.

These included sports trading cards for Olympian Vicki Manalo Draves and professional football great Roman Gabriel, as well as an action figure of “Star Trek’s” Marlena Moreau of the “Mirror – Mirror” original series episode played by Filipina actress Barbara Luna. The library display will be available for viewing the month of October and other Filipino American authors are scheduled to speak.