Adopted as a child, Filipino-born man faces deportation from U.S. 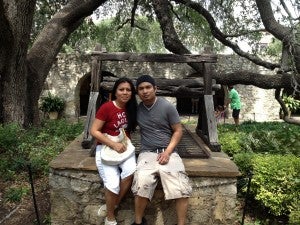 Adam Lieber, adopted from the Philippines as an infant, shown here with a friend, is facing deportation as an undocumented person in the U.S. CONTRIBUTED PHOTO

NEW YORK CITY — Adam Lieber was adopted by his American mother from the Philippines when he was an infant. He grew up in Dallas, Texas, pledging allegiance to the U.S. flag, singing the “Star-Spangled Banner” and celebrating Thanksgiving just like any other American.

But the U.S. government has been grappling with the absence of records that could show his birth certificate or naturalization documents. For immigration officials, Lieber is an undocumented Filipino immigrant.

And after long and complicated legal battles on both sides that began five years ago, now Lieber’s days in the United States are numbered. Lieber, a 28-year-old shift manager at Genghis Grill in suburban Dallas, has been facing deportation and could be ordered to leave the country any time soon.

Yet, the Filipino-born man — who has not been to the Philippines since he came to the U.S. and does not know any of his biological relatives — says he will continue fighting his case in immigration court. He and his supporters are hoping to find legal means for him to remain in the United States.

“I feel that it is wrong,” says Lieber, who just got out of the hospital for his chronic pancreatitis. “I don’t think that it is fair for me, growing up in the U.S. and then to be tried to be sent back to some place that I don’t even know anything about.”

It was December of 2010, he says, when his predicament began. He was stopped by a Dallas police officer who arrested him for drunken driving. He pleaded guilty of DUI (Driving Under the Influence) and served time in jail.

While he was in a Dallas County jail for about a week, and later was moved to another jail in Collins County where he stayed for almost two weeks, he says, the Immigration and Customs Enforcement (ICE) officials ran his records and found out that he was undocumented.

“It was devastating for me to find out that I was not a U.S. citizen,” Lieber says. “It hurt me really bad.”

Then everything for him seemed to plummet headlong, he recalls. He was then taken to an immigration detention center where he spent a couple of days.

After he was released and he appeared before an immigration judge, he received a final deportation order. During those days, he was ordered to wear an ankle monitor until the day of his departure.

In 2011 Lieber says his lawyer at the time suggested that he sign a voluntary departure notice, instead of fighting his deportation. He didn’t know, however, that what he signed would make his situation worse.

“What he explained to me was that my best bet was to take the voluntary departure. ‘Go back to the Philippines and you’d be able to return within a year,’” he says. That’s what I was told, so I agreed to sign it.”

Had he known that he could be banned from coming back to the U.S. for 10 years as a consequence, Lieber adds that he might have made a different decision.

Two days before his deportation, in 2012, Lieber was given a reprieve to stay in the country. Although temporary, it was a major victory for him, his 24-year-old sister who was also adopted from Romania and his friends and supporters. Lieber’s sister has a legal immigration status in the U.S.

“We got him his Social Security card, a valid driver’s license and an employment authorization card so he could legally work here,” says Isenberg. “At some point, they [ICE officials] also took off the monitor from his ankle.” 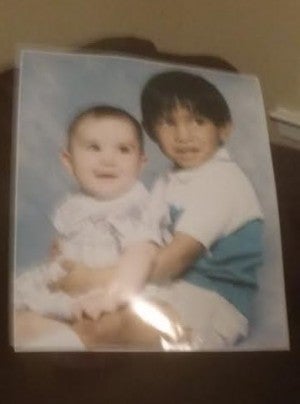 Young Adam with his sister, herself an adoptee from Romania. CONTRIBUTED PHOTO

According to Isenberg, a real estate businessman, he got to know Lieber after his mother contacted his office, asking for help. For years, he says that his office has supported thousands of immigrants and helped win hundreds of complex immigration cases.

“Since I met him [Isenberg], he and his whole office became a part of my family. They take care of me,” Lieber says. “They give me advice when I need it. They keep my head on straight. I think of him as a big part of my life.”

All his life growing up in Dallas, Lieber knew that Marcia Eileen Lieber, a Jewish American, was his adopted mother. She brought him from the Philippines to the U.S. when he was 11-month-old on a tourist visa.

But his mother never showed him his adoption papers. He had a Social Security card that his mother gave him, yet it turned out to be someone else’s card.

When he talked to his mother about his situation, she told him that his adoption was legal. During that time, Marcia was diagnosed with congenital heart disease.

“She didn’t mention any kind of problems with the paperwork — and she said that I am a U.S. citizen,” Lieber says.

“Now getting a birth certificate or any kind of documents from her is impossible,” said Isenberg. “This situation is just outrageous.”

Advocates who have been helping Lieber, however, suspected that Marcia knew that his adoption documents were forged.

“When all these things happen, I began to think of my mom not the [same] way I did when I was growing up with her. I feel betrayed that she went to her grave knowing what the real truth was without telling me,” Lieber says. “I feel really hurt that she did that. But it still doesn’t change any kind of feeling that I have for her being my mother.”

But he also admits that his mother may have not told him the real story behind his adoption to protect him, and that she was worried that he would resent her for what she had done.

After Marcia died, Lieber and his sister found several documents in their house, including his Philippine passport bearing his birth name Adam Jeffrey Mancenido. They also found several copies of their mother’s birth certificate.

Isenberg says that when he and his legal advisers looked at Lieber’s Philippine passport and Marcia’s birth certificate, they also noticed that her full name was forged, showing disparities in the spelling.

“She lied. What she did was human trafficking,” Isenberg says. “Adam was a victim of human trafficking and is deserving of special treatment.” His legal team is now looking at the possibility of filing a T or U visa on Lieber’s behalf.

Isenberg says he “will do everything” to save Lieber from deportation. Recently, he contacted by phone the Philippine consular office in Los Angeles, California, and he was told that they would further investigate Lieber’s case.

“He’s not going to be deported. That would be over my dead body,” Isenberg says. “Whatever needs to be done must take place.”

Still, Lieber has a final deportation order. When he showed up last Monday, September 28, at the ICE office for his scheduled appointment, an ankle monitor was put back on him.

“I don’t know anybody over there in the Philippines. I don’t know what I would do, if that [deportation] actually happens,” he says, his voice crackling. “It terrifies me to think about that. I am scared.”