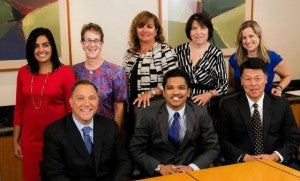 HACKENSACK, New Jersey – A Filipino American law student who credits his grandmother for his drive to succeed earned a diversity scholarship from a national law firm.

Christopher Atlee F. Arcitio, St. John’s University Law class ’17, earned the Cole Schotz P.C. 2015 Diversity Scholarship Award. According to the firm’s official press release, Arcitio’s determination to pursue a career in law and efforts to support other minority students studying law stood out among a strong group of candidates for the annual scholarship.

The diversity scholarship awards $5,000 to a second-year, full-time law student in good academic standing attending law school in one of the five states where Cole Schotz’s six offices are located.

A candidate’s academic achievement, involvement in community service, demonstrated leadership abilities and advancement of diversity in the legal profession are considered in the selection process.

At St. John’s Law, Arcitio has excelled academically while holding leadership roles in several legal organizations, setting an example for his three younger siblings and the profession overall.

As student ambassador of the New York City Bar Association and as director of alumni relations for the Asian Pacific American Law Students Association at St. John’s Law, Arcitio has worked to improve the legal profession while routinely supporting others students with aspirations for higher education.

He is the first member of his family to earn a bachelor’s degree, and credits the courage of his grandmother to leave the Philippines for the United States as his inspiration to follow his dream.

Cole Schotz is “committed to the advancement of diversity in the legal community, and strongly believes that a diverse firm is a firm that best serves its clients,” according to its press statement. It also works with the New Jersey Law Firm Group, a non-profit corporation made up of law firms, law schools, and public agencies, to promote inclusiveness and diversity in the New Jersey bar.

“Christopher is a dedicated student actively working to improve the legal profession by encouraging individuals with diverse experience and perspectives to get involved,” said Wendy Berger, co-chair of the Cole Schotz’s diversity committee and member of the Real Estate Department. “In overcoming the challenges that stood before him on his way to higher education, Christopher has demonstrated the type of committed attorney he will be.”