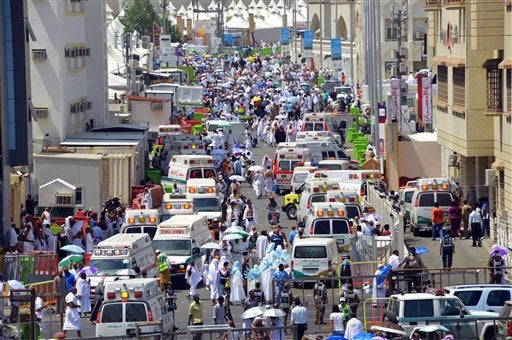 This image released by the Saudi Press Agency, SPA, shows ambulances in Mecca, after people were crushed by overcrowding in Mina, Saudi Arabia during the annual hajj pilgrimage on Thursday, Sept. 24, 2015. Hundreds were killed and injured, Saudi authorities said. The crush happened in Mina, a large valley about five kilometers (three miles) from the holy city of Mecca that has been the site of hajj stampedes in years past. (Saudi Press Agency via AP)

JAKARTA, Indonesia— Indonesia criticized Saudi Arabia on Tuesday for its slow response to the hajj pilgrimage disaster in Mina, saying its diplomats only received full access to the dead and injured days after the crush.

The criticism from Indonesia, the Muslim world’s most populous country, comes as its officials, as well as those in India and Pakistan, say that Saudi officials gave foreign diplomats some 1,100 pictures of those killed in last week’s disaster.

The Saudi Health Ministry’s latest figures, released Saturday, put the toll at 769 people killed and 934 injured in the stampede. Saudi officials have yet to comment on the discrepancy in the toll as countries around the world struggle to identify their dead.

READ: DFA says only one Filipino died in hajj stampede

Authorities in the kingdom only granted Indonesian diplomats full access to the dead on Monday night, including forensic records like fingerprints, said Lalu Muhammad Iqbal, an official in Indonesia’s Foreign Ministry. He said 46 Indonesian pilgrims died in the Mina crush, while 10 were injured and 90 remain missing.

Lukman Hakim Saifudin, Indonesia’s religious affairs minister, said in a statement Monday that Indonesians did not have free access to hospitals to search for injured Indonesians.

“The Saudi Arabian government has its own regulation, tradition, culture and procedures in dealing with such cases,” Saifuddin said from Mecca. “This has not allowed us enough freedom in our effort to identify” the victims.

Saudi authorities have said that the disaster began when two large waves of pilgrims converged on a narrow road last Thursday during the final days of the annual hajj in Mina near the holy city of Mecca. Survivors say the crowding caused people to suffocate and eventually trample one another in the worst disaster to befall the annual pilgrimage in a quarter-century.

Iran, Saudi Arabia’s regional Shiite archrival, has criticized the Sunni kingdom over the hajj disaster and daily protests have taken place near the Saudi Embassy in Tehran. Iranian state media also have suggested that the death toll in the disaster was far higher, without providing any corroboration.

Iranian President Hassan Rouhani, who criticized Saudi Arabia for what he called “incompetence and mismanagement” of the hajj at the U.N. General Assembly on Monday, cancelled his planned events in New York on Tuesday to return to Tehran.

In Pakistan, the country’s Supreme Court said it received a citizen’s petition asking it to open an investigation into the hajj disaster. So far, no hearing has been set. Meanwhile, its Religious Affairs Ministry said at least 44 Pakistani pilgrims died at Mina, while 35 were injured.

The hajj this year drew some 2 million pilgrims from 180 countries, though over the past few years it has drawn more than 3 million without any major incidents. Able-bodied Muslims are required to perform the five-day pilgrimage once in their lifetime, and each year poses a massive logistical challenge for the kingdom.

This year also marked the first hajj overseen by King Salman, who holds the title of “custodian of the two holy mosques,” which gives the monarchy great religious clout and prestige in the Muslim world.

But even before the hajj began, disaster struck Mecca as a tower construction crane crashed into the Grand Mosque on Sept. 11, killing at least 111 people. TVJ