DFA says only one Filipino died in hajj stampede 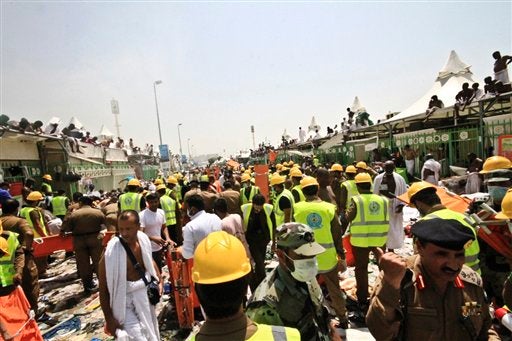 Muslim pilgrims and rescuers gather around people who were crushed by overcrowding in Mina, Saudi Arabia during the annual hajj pilgrimage on Thursday, Sept. 24, 2015. Hundreds were killed and injured, Saudi authorities said. The crush happened in Mina, a large valley about five kilometers (three miles) from the holy city of Mecca that has been the site of hajj stampedes in years past. (AP Photo)

Amid reports that six Filipinos died at the hajj, the Department of Foreign Affairs (DFA) said only one was killed in a stampede during the pilgrimage.

Foreign Secretary Charles Jose on Saturday reiterated that there was only one “stampede-related” Filipino casualty in the Muslim gathering in Saudi Arabia.

READ: Stampede kills more than 700 in one of worst-ever hajj tragedies

According to a Radyo Inquirer 990AM report, six Filipino pilgrims bound for the annual hajj have died due to several illnesses.

The identities of the casualties, however, have not been disclosed. Nestor Corrales/RC