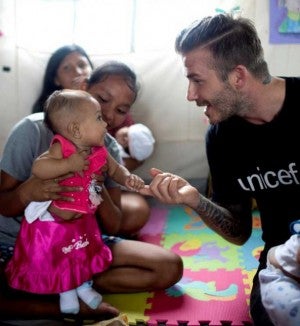 LONDON – Britain’s soccer great David Beckham choked back tears while telling the story of a Filipina girl victim of Typhoon Haiyan, as he implored world leaders to use their resources to help disadvantaged children. Beckham was speaking at the United Nations (UN) in New York City on Thursday, September 24.

Speaking during the launch of the global youth blogging community Voices of Youth, Beckham shared an emotional story about a four-year-old Filipina girl who died during typhoon Haiyan in 2013. The typhoon killed thousands of people and left more than 1.7 million children homeless.

Beckham, who became UNICEF Goodwill Ambassador in 2004, choked up as he recalled meeting the family of Viana, the little girl who was pulled away from her father’s arms by raging waters and found dead two days later.

As part of Soccer Aid, the football legend traveled to Tacloban last year to meet children affected by Typhoon Haiyan. There, Beckham was introduced to eight-year-old Venus, who lost her four-year-old sister during the turbulent superstorm. He spent time with her parents, who managed to survive the disaster.

Beckham said in his speech: “I met a family in the Philippines – a mother, a father – who wanted to tell the story about their two young girls, Venus and Viana. On the night the typhoon hit, the family were on their roof trying to protect themselves.

“The mother, tired, scared, exhausted, said to the father, ‘Can you please take Viana,’ so the father did. He had Venus and Viana in his arms. Unfortunately, the father was knocked off the roof by one of the waves. He then woke up six hours later holding one of the girls.”

Here Beckham’s voice wavered and he cleared his throat to compose himself. He then continued, “This was the night of the typhoon.”

“A day and a half later, unfortunately, Viana was found face down and unfortunately, she had died. This was one of the most devastating stories I heard.” 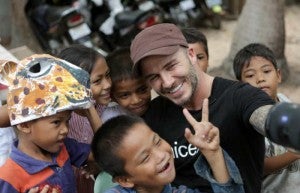 Following his speech, Beckham coughed and confessed that meeting Viana’s family “really affected him,” and said: “That story will never leave me.”

During the event, Beckham and United Nations Secretary-General Ban Ki-moon unveiled the Voices of Youth digital installation. Created for Unicef by Google, the installation uses mobile technology and social media to deliver the messages of children and young people to the heart of the UN General Assembly.

Beckham further discussed “7: The David Beckham UNICEF fund,” an initiative he launched in order to make “a serious commitment to help the most vulnerable children in the world.” He noted that, due to conflicts, “more than 15 million children were exposed to extreme violence, and many more affected by natural disasters.”

Beckham said, “I want a world where children can grow up safe from war, violence, poverty and preventable disease – don’t you?”

He ended his speech with: “Together, we have the power to save lives.”