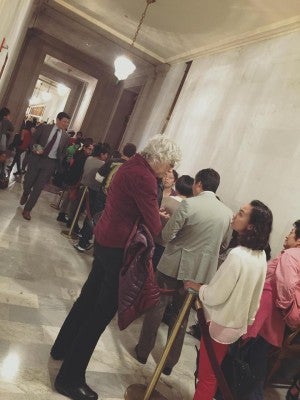 The queue for those who wanted to participate in the Board of Supervisors hearing on the proposed memorial to WWII “comfort women.” CONTRIBUTED PHOTOS

SAN FRANCISCO – Despite some local opposition, the San Francisco Board of Supervisors unanimously approved a resolution calling for a memorial to “comfort women” abused by the Japanese Imperial Army during World War II.

Introduced by Supervisor Eric Mar (District 1), the resolution is aimed at honoring some “200,000 women who were kidnapped and forced into sexual slavery the Imperial Japanese Army during its colonial and wartime occupation” of Asia and the Pacific Islands from the 1930s through the duration of World War.

The resolutions further states that “unspeakable and well-documented war-crimes, including mass rape, wholesale massacres, heinous torture and other atrocities, were ·committed by the Japanese in all the countries that Japan occupied during World War II.”

Supervisor Mar’s resolution also seeks “to ensure that the plight and suffering of these girls and women will never be forgotten or erased from history.” 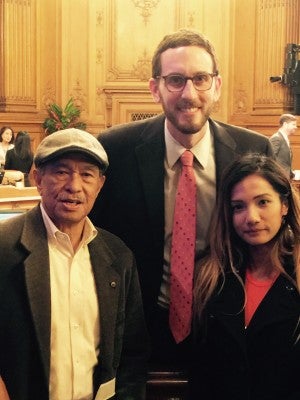 The approved resolution does not come with a budget allocation for the project, though, and cost estimates could reach $140,000 with funds most probably coming from private groups and individuals.

The timeframe for building the memorial is at least year, considering the creation of the committee, holding recommendation hearings for the supervisors, the final board approval of all considerations for construction to begin and the actual construction itself. .

“My understanding is that they are going to create a committee to decide what the memorial statue will look like and where it is going to be placed. I hope they will include a Filipino in that committee even if Filipinos, unlike the Chinese and Koreans, have not really been active in this initiative whatsoever,” according to Rudy Asercion, advocate for Filipino war veteran welfare and affairs.

Tina Shauf, Gabriela U.S.A. campaign officer, said her group supports the resolution as the memorial will make children aware of the lessons of the past and stand up against injustices..

“In the history of imperial wars of aggression, the women and children are the first ones to actually suffer. With this memorial, we wanted to honor their lives and also validate their experiences,” Shauf stated.

“We were able to link up with Lila Pilipina, a Gabriela organization of comfort women who are still rallying and fighting for their own rights and pushing for acknowledgements of this war crime and wanting reparation and apology from the Japanese government,” Shauf added.

Asercion felt very good about the unanimous approval of the resolution but was also very unhappy that it was a “watered down” version after consideration of the opponents of the memorial.

“They were arguing that it was anti-Japanese, and will create hatred towards the Japanese people. There were also some right-wing groups from Japan that emailed the Board of Supervisors to deny that the comfort women even existed because they claim they were merely prostitutes,” Asercion reported.

“There were also political pressures from politically powerful individuals in San Francisco like Janice Mirikitani, co-founder of the Glide Memorial Church, who spoke against it during the deliberation,” Asercion explained. “After she spoke, the supervisors had a last-minute confab and decided to water down the resolution to become a resolution against human trafficking, violence against women that happens in other countries.”

Asercion maintained that the crime of Japanese Imperial Army against sex slaves was atrocious and does not compare to ordinary violence against women or domestic violence cases, since the slaves were abducted young girls that were raped 30 to 40 times a day.

“Its unfortunate that verbiage did not specifically mention Filipinas or other ethnicities likewise victimized as comfort women. It waters down the potency of the message that we wanted to send especially since Filipinas continue today to suffer greatly as victims of human trafficking,” stated Araullo, also a member of the Filipina Women’s Network.

For Natassja Reintegrado, a young mother of two, the revision of the original resolution did not lead to a watered-down version as it even became a more powerful statement. 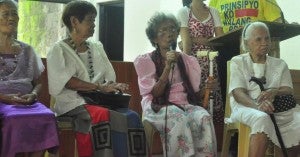 “I think it was brilliant for them to actually expand and rewrite whatever resolution they had because it now has a whole spectrum of women abuses — human trafficking, rape, forced prostitution – and that memorial will be a symbolism against these abuses. For me what happened to comfort women during the Japanese occupation are still happening up to now decades later as women are still abused in different forms,” Reintegrado claimed.

She was quick to add though that she respected and understood the disappointment of Asercion and others about the final version..

As to the significance of a memorial and the possibility of unintentionally reopening, old wounds of the war, Shauf claimed that commemorating the sufferings of the comfort women is not an attack at all towards anyone but rather about learning a lesson from the past.

“Being a progressive city, San Francisco has the responsibility to not just speak the truth of the past but also acknowledge and validate the experiences of the people who have fallen victims of atrocious war crimes,” Shauf reasoned. 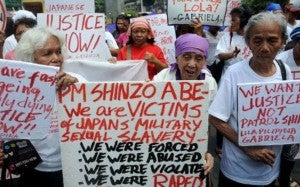 Reintegrado opined that the memorial would help raise awareness on the sad plight of victims of rape, forced human trafficking and prostitution, including abused women even in a progressive city like San Francisco where even underage girls are reportedly being snatched and victimized to become prostitutes.

“This not to shame the Japanese and their country, but this is only considered to never forget that women time and again are going through violence, tortured and/or sexually-assaulted during war times,” Reintegrado asserted.

For his part, Asercion argued that unless there is a concession from the government of Japan to acknowledge that comfort women really existed, nothing will make the controversy go away.

“The historic significance is that for the first time, there will be a memorial in a major city in America, which will be a first. San Francisco is a major magnet and what happens there will be repeated in other cities. We will be advocating for similar memorial in other major cities like New York and the others,” Asercion added.

In its notes on Filipino Comfort Women, the FilAmVet History Project wrote that 18 Filipina comfort women sued the Japanese government on April 1993 alleging that they were forced to serve as prostitutes for Japanese soldiers in violation of the 1907 Hague Treaty and international rules that protected civilians in military-occupied territories. It asked for compensation but was thrown out in 2003 after the Japanese Supreme Court rejected an appeal on the dismissal of the case in the lower courts.

This resulted even after Japan’s own Chief Cabinet Secretary Yohei Kono acknowledged, also in 1993, that many Japanese, Chinese, Korean and Filipino women lived as captives and were forced into prostitution for Japan’s wartime military. beginning in 1932, when Japan invaded China, to the end of the war in 1945.