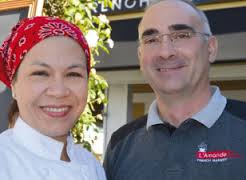 SAN FRANCISCO — Filipino workers in Southern California suing the bakery owned by the married daughter of Juan B. Santos, chair of the Philippines Social Security, are now asking for a default judgment worth more than $15 million dollars, according to new court documents filed on Friday.

The papers say the Almeidas triggered a judgment for having “failed to plead or otherwise defend,” essentially ignoring the court.

The Almeidas told this reporter they were on holiday in the Philippines and would return at their lawyers’ directions. They have fired the workers they brought to the U.S. on special E-2 investor visas; shut down and sold the two L’Amande bakeries; sold off their millions in assets including an apartment building and home in the Los Angeles suburbs; and they have stayed in the Philippines, except for one trip to sign real estate documents in the sale of the home in September.

In an email to this reporter in August, Analiza Moitinho de Almeida admitted to the transferring of assets.

But the new court documents filed on Friday, September 25, say the 11 workers were the ones victimized by Almeida and are “entitled to judgment against the defendants on all claims.”

The suit brought forth last March is based on violations of California state and federal laws, including human trafficking under the racketeering laws, and a variety of labor code violations involving unpaid wages and overtime.

The new motion claims damages of $12.4 million, including $10 million for compensatory and punitive damages on the human trafficking and the retaliation claims. Actual back wage claims amount to about $2.3 million. Another $2.8 million are in court costs and attorney’s fees. All told, the plaintiffs are seeking more than $15 million.

The court has been awaiting a response. Instead, the Almeidas appeared to fight the claims based on federal and state law on Facebook, by posting photos of the workers at play during their leisure time. 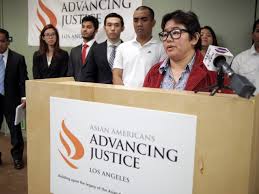 Filipino bakery workers who are suing the Motinho de Almeidas explain their grievances during a press conference. THINKPROGRESS PHOTO

“How can these photos below be construed as ‘slavery’?” Analiza Moitinho de Almeida wrote to this reporter in August. “All the employee claims are based on self-serving untrue statements designed to fast track their permanent residency visa. Their claims will be disproven with the documents and photos we have.”

“I have known all the plaintiffs for many years, some as much as 26. I have treated them like family,” she continued. “The employees did not work the excessive hours they claim. There are many photos that place them in other places (beach, Las Vegas, New York, Disneyland, Universal Studios, Tijuana, Hollywood, etc.) while they claim to have been working at the bakery. This is an attempt to extort money for work not rendered…The employees have used the cliche of ‘rich vs. poor’ to further their cause. …They have portrayed us as ruthless employers, but examination of the many photos will show that they are far from the oppressed and abused that they claim to be…. In our perspective, we feel that this story is told upside down. We are the victims of people who have conspired to use the weaknesses of the justice and immigration system to further their cause.”

But the lawsuit claims the Almeidas brought the workers into the U.S. as skilled workers required by the E-2 visa. The jobs, the plaintiffs claim,   were actually more menial domestic servant positions.

The original suit further charges there were threats of deportation and threats on the workers’ families in the Philippines. It also says the Almeidas made the workers agree to pay them $11,000 if they did not stay with them for three years.

The lawsuit also seeks increased damages for what the plaintiffs call the fraudulent transfers of assets whereby the Almeidas “absconded and removed assets to the Philippines.”

The hearing on the motion for default judgment against the Almeidas is scheduled for November.

He writes from Northern California.

Amid ‘draft dodger’ issue, Thirdy expresses respect for the PBA