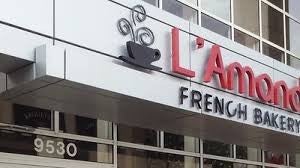 Filipino-owned L’Amande Bakery in Beverly Hills and Torrance, California has shut down and fired workers who sued the owners.

The California bakeries of Gonzalo and Ana Moitinho de Almeida, the daughter of Juan B. Santos, the head of the Philippine Social Security System, have been sold off and shut down as of last week.

All the bakery workers have been fired and let go. But the story isn’t over—not by a long shot.

With a court date set for May 31, 2016, the case continues, as the bakery owners scramble to protect their assets, and the workers suing them try to figure out if they will be allowed to stay in the U.S. to fight for justice.

According to court records, Ana Moitinho de Almeida, and her powerful father, have been involved in a high-speed race to liquidate and reposition assets, including the sale of both bakeries; the sale in June of an apartment complex for $2.375 million; and the sale of their $1.4 million home in Rolling Hills Estates to a trust that names Santos as the beneficiary of the property. 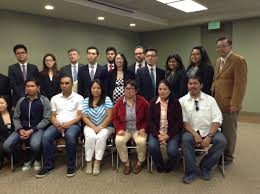 “We believe she did this so that the property would no longer be in her name, so that the (bakery workers) could not reach it in the lawsuit against her,” said Laboni Hoq, a lawyer with Asian Americans Advancing Justice, the civil rights organization representing the 11 Filipino workers.

“We also believe the deeds of trust to her father, Juan Santos, are fraudulent because they were recorded up to five years after she claims she entered into a loan from her father to purchase the property. Under the law all of these actions demonstrate fraudulent conduct that can be set aside. In their court papers, Ana and (her husband), Gonzalo Moitinho de Almeida, did not deny any of these facts, let alone present evidence to the contrary.”

In addition, Santos, has begun foreclosure procedures against his own daughter to force the sale of the Rolling Hills Estates home, in what appears to be an attempt to keep it out of reach of a judgment in the case.

“We do not believe this is a legitimate foreclosure and are exploring the plaintiff’s legal options,” said Hoq, who indicated options might include a temporary restraining order that would prevent the sale of assets.

I have been in touch with the Almeidas by phone and email. At this point, they have yet to respond to my questions.

In my most recent communication with Ana Moitinho de Almeida, she told me about pictures of her workers that would indicate they were far from being mistreated. “It may interest you that we have close to 500 additional photos, emails dating back from 2009,” she said.

The pictures are likely the same ones that reportedly were displayed on the bakery’s closed doors last week, which show the employees enjoying themselves at parties and visiting casinos and vacation spots.

“Who protects small business owners from frivolous lawsuits?” reads a goodbye message on a sign with the pictures. “Aren’t these allegations just a ploy to extort damages and to fast-track the employees permanent residency application?”

But if there’s an immigration issue at stake, the relevant one in court will likely turn on how the Almeidas treated the 11 workers from the Philippines allowed to enter under the E-2 “wealthy investor” visa program.

The law allows the E-2 workers to enter the U.S. on a temporary basis, if they perform executive duties, or are in some way considered “skilled,” “special,” or “essential.”

But the Almeida’s workers claim they were brought in to do jobs that were far below what was promised. The jobs were neither special nor exclusive to the bakery, and often combined domestic work and nanny care for the Almeidas, along with manual labor for their rental properties. The workers’ suit alleges they were promised $2,000 a month, but were paid as low as $360, worked long hours without breaks, without overtime and without days off.

The case shows the lax oversight that exists in the E-2 program. There’s little protection for workers, who are forced to abide by the conditions established by the employer.

And when the workers decided to challenge the Almeidas in court, it puts workers like Armalinda Dela Cerna, 40, in a new kind of limbo.

Dela Cerna was fired last week from the bakery and is now jobless and subject to deportation. Her life has become a day-to-day proposition.

“Right now, we’re worried about how we’re going to survive,” Dela Cerna said by phone about her life and her worker colleagues. “It’s a struggle for us. We lost our only source of income.”

The co-workers are still a tight knit group, and help each other out. And while their immigration status because of the “investor visa” is at risk, they feel going back to the Philippines now is even riskier.

“I’m afraid to go home, Ana’s father is so influential in the Philippines, so I’m scared for myself and my family,” Dela Cerna told me.

Her first option is to stay and fight in court next year in May. But only if she and the workers can last. And then, what if the Almeidas and Juan B. Santos render themselves judgment proof?

When I first reported this story, there was a loud cry from some Filipinos saying I got the story wrong, especially when it came to the Filipino business icon Santos.

“Why do you have to drag his name into this?” some well regarded members of the Filipino community asked me.

Santos is one of the wealthiest and well-connected Filipinos in the Philippines, involved in nearly every major corporate endeavor in the country.

Of course, that he’s a public official as the head of the Philippine Social Security System (PSSS) is also significant. His daughter’s business is surely separate. But with the foreclosure on his daughter’s property, Santos has definitely involved himself in the case.

The Almeidas may be successful in moving assets to Santos’ name. But lawyers for the workers insist the assets remain subject to the court’s jurisdiction, no matter where the defendants may choose to live or place their cash outside the U.S.

While all this is going on this summer, the Almeidas continue what they believe is their best defense: to show how the workers were actually well-treated, given vacations and gambling trips as perks for their employment.

Sounds good. Except that the workers say they paid for the trips themselves, and were usually shown on their day off.

Already, the California labor authorities have found enough wrong at the businesses run by the Almeidas and ordered them to pay their workers penalties in excess of $250,000. A hearing was held earlier this summer to get that amount lowered, with a decision still pending.

So the Almeidas, and Juan B. Santos are on the defensive. They are trying as fast as they can to get down to nothing. The workers are already at rock bottom, but feel compelled to stand up for their rights in America.

“The last thing he told me,” Dela Cerna said of her firing last week by Gonzalo Moitinho de Almeida. “(He said) ‘You’re ruining our reputation, and we’ll make sure we ruin yours too.’”

She continued: “He said, ‘Out of this case, you’re not going to get a single penny.’”

Almeida’s warning and the firing came without notice and have made Dela Cerna even more scared about her future. “I have mixed emotions,” she said. “But more the scared part.”

Emil Guillermo is an award-winning journalist and commentator based in Northern California. Contact: www.twitter.com/emilamok, www.fb.com/emilguillermomedia, www.amok.com