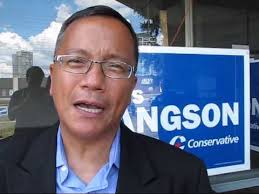 MISSISSAUGA, Ontario — Pouring rain could not dampen the enthusiasm of Julius Tiangson supporters who gathered at his campaign headquarters at 3610 Mavis Road on Saturday, September 19.

Julius Tiangson is a highly visible community leader of Filipino descent running on the Progressive Conservative ticket, hoping to represent the newly formed riding of Mississauga Centre in the upcoming federal elections on October 19.

One corner of the huge industrial warehouse was converted into a cafeteria-style food line, where you handed in your ticket to receive buns, broiled hot dogs, beef patties and halal chicken burgers.  Salads were dished out by volunteers, and more volunteers handed out premade halo-halo in plastic glasses. 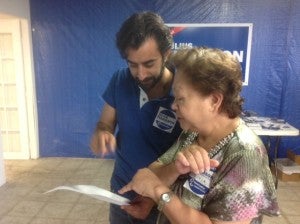 “We are no longer Indian, Egyptian, Filipino, or African,” Tiangson said as he looked out at his audience.  “We are all Canadians. Unity is what I am working for,” he added. 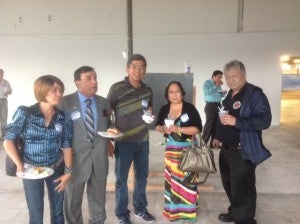 Judith Gonzales of PinoyTV, Aspi, media coordinator for the Tiangson Team; Ronnie and Claire Delagana of iKubomedia.com; and Ariel Ramos of PPCO.

Julius Azarcon Tiangson first came to Canada in 1985, when he was 21, as a temporary foreign worker via a work exchange program with Haskins and Sells (now Deloitte).  He had graduated from Ateneo de Davao with a bachelor’s degree in Commerce.   He is a Certified Public Accountant and holds a master’s degree in Intercultural Studies from Ambrose University in Alberta.
He liked Canada and decided to immigrate, arriving in Saskatoon, Saskatchewan in 1987.  With his first- hand experience of the immigrant’s life, Tiangson decided to devote his efforts to assisting Filipino contract workers in the Middle East, Asia and Europe.  In 2004 in Mississauga, he founded the Gateway Centre for New Canadians, where he now serves as executive director.

Since its founding, the “Centre has served annually over 8,000 people from 36 ethnic groups and implemented over 22 programs to serve children, teens and adults in various stages/transitions in life.

Indirectly through the Centre’s coordination of the Settlement Workers in Schools (SWIS) program, over 25,000 school age immigrant children from over 100 nations have been helped,” shared Tiangson.

Building capacity among new Canadians is Tiangson’s mantra. For his work as a volunteer, he received the Civic Award of Recognition for ten years of active volunteerism and the Queen Elizabeth II Diamond Jubilee Award for his role in assisting new Canadians integrate in their new home.

Tiangson is married to Nona Lee (nicknamed Bunny) and their children are Dana Mae, Francis, and Nathan.