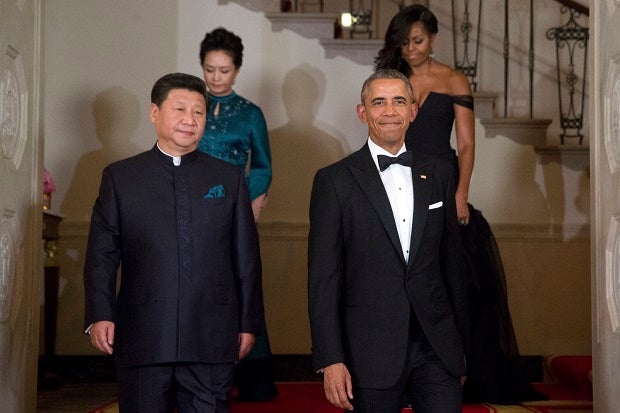 In this Sept. 25, 2015, photo, President Barack Obama, Chinese President Xi Jinping, first lady Michelle Obama and Jinping’s wife Peng Liyuan descend the Grand Staircase as they arrive for a State Dinner at the White House in Washington. Chinas pledge to help crack down on hackers who steal commercial secrets from the United States, even coming as it did amid a bit of arm-twisting by Obama, is a big breakthrough that could reduce US-China tensions and end huge losses for American companies. Analysts say the agreement between the worlds two biggest economies is just a start but could lead to real progress on the cybertheft issue, depending on how well its implemented. AP Photo

WASHINGTON, United States—US President Barack Obama and Chinese President Xi Jinping agreed that their governments would not engage in or support online theft for commercial gain—a first step towards resolving a major area of tension between the two nations.

Speaking at a joint press-conference on Friday, after two-days of meetings, Obama said the leaders had “jointly affirmed the principal that governments don’t engage in cyber espionage for the gain of commercial companies.”

He later added that the two countries had made “significant progress” in agreeing to how law enforcement would work together to “go after individuals or enemies engaging in cyber attacks.”

Xi, who is on his first state visit to the US Capitol, said in agreement that “both countries have reached important consensus on joint fight against cyber crimes” and added that the nations would establish a “high level joint dialogue mechanism” to address the matter.

The tone of cooperation, was however tempered by Obama’s statement when taking questions from reporters that they would continue to monitor if  “words are followed by actions” and assess if  “progress has been made in this area.”

He added that the US has tools to clamp down on the problem, including the ability to impose sanctions on individuals or entities that conduct cyber attacks.

Xi’s trip comes at a time when US-China relations are fraught with tension over outstanding issues such as Chinese hacking, its aggression in contested waters in the South China Sea and its treatment of civil society.

While the two countries came together on issues such as climate change—both reaffirming their shared commitment to address it, and Obama commending China for announcing a cap on trade emissions—there was still tension on the issue of the South China Sea.

Obama reiterated US concerns about “land reclamation, construction and militarisation of disputed areas, which make it harder for countries to resolve disputes peacefully.”

But Xi did not back down on China’s claims to the islands in those contested waters, saying it would defend those claims in the face of competing claims by neighboring countries.

“Islands in the South China Sea, since ancient times, are China’s territory. We have the right to uphold our own territorial sovereignty and lawful and legitimate maritime rights and interests,” Xi told a joint press conference.