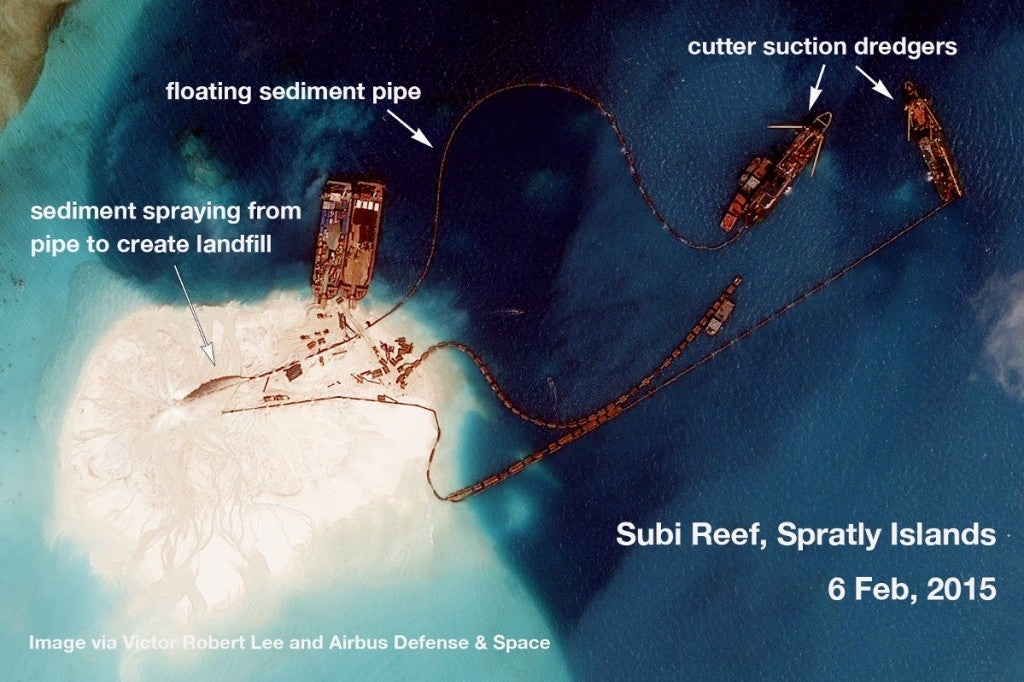 The tense radio exchange between a US spy plane and the Chinese Navy in the Spratlys on Wednesday underscores the tension caused by China’s land reclamation in the South China Sea, Malacañang said on Friday.

The government, however, is still verifying the incident, according to Communications Secretary Herminio Coloma.

“Nonetheless, it highlights the reality that there is tension brought about by [China’s] reclamation activities and its insistence on using the ‘nine-dash line theory’ despite what is clearly stated in the United Nations Convention on the Law of the Sea [Unclos],” Coloma said, referring to a map with nine demarcation lines that China uses to lay claim to almost all of the 3.5-million-square-kilometer South China Sea.

Coloma, however, emphasized that the Philippines does not want “the tension to worsen,” and that the Aquino administration is “determined to push our position [on the maritime dispute] by following international laws.”

Asked if China’s massive land reclamation in the South China Sea would be on the agenda of President Aquino’s coming state visit to Japan, Coloma said Mr. Aquino generally engages other state leaders in discussing the maritime row as “it is an important reality in the current global situation, especially in this part of the world.”

“We cannot set aside the possibility that [the China reclamation activities] would be discussed,” Coloma said.

The President, he said, has raised the China issue in most of international forums he attends, including the Association of Southeast Asian Nations (Asean) Summit and the Asia-Pacific Economic Cooperation (Apec) meetings. Japan, he said, is an Apec member.

In the South China Sea territorial dispute, the Philippines stands for freedom of navigation and the rule of law, Coloma said.

“Recent events would not affect our policy on this. Let’s just say that we have been consistent and our position remains steadfast,” Coloma said.

He said the government would continue to study the legal aspects of the Philippines’ petition in the United Nations arbitral tribunal, as well as pursue its discussions with Asean with a single voice against China’s massive reclamation work, and most especially, adopt a legally binding code of conduct in the South China Sea.

The Philippines and the United States signed an Enhanced Defense Cooperation Agreement (Edca) last year, mainly as a response to China’s belligerence in the South China Sea.

Philippine and US officials said the Edca was an offshoot of the Mutual Defense Treaty between the two countries.

Critics of the agreement, however, claimed that it was unconstitutional and challenged its legality in the Supreme Court.