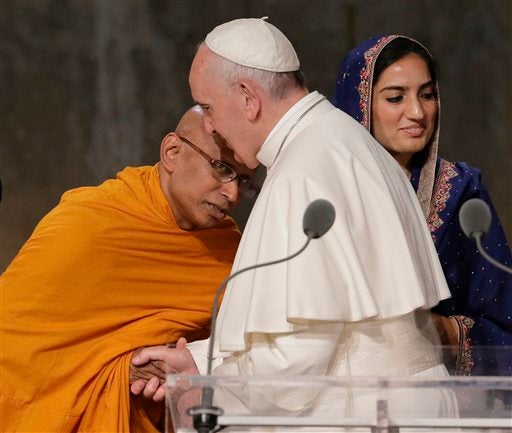 NEW YORK — Sweeping through the landmarks of America’s biggest and brashest city, Pope Francis on Friday offered comfort to families of the 9/11 victims at ground zero, warnings to world leaders at the United Nations, and encouragement to children — many of them immigrants — at a Catholic school in East Harlem.

A parade through Central Park and an evening Mass at Madison Square Garden were also on the schedule for Day 4 of the pope’s first trip to the U.S. Rock stars who performed at both those venues would have envied the welcome given the pope by cheering, sometimes shrieking, crowds.

The visit posed huge logistical and security challenges, and many streets were closed off. At the U.N., hundreds of police officers and Secret Service agents were on duty, backed by bomb-sniffing dogs and police boats. For the procession in Central Park, ticketholders were barred from bringing backpacks and other items.

In his speech at the U.N., the pope decried the destruction of the environment through a “selfish and boundless thirst for power and material prosperity.”

The environment itself has rights and mankind has no authority to abuse them, said Francis, who hopes to spur concrete commitments at the upcoming climate-change negotiations in Paris.

He demanded immediate access for the world’s poor to adequate food, water and housing, saying they have the right to lodging, labor and land.

The ovations contrasted sharply with the moment of silent prayer during the pope’s visit later in the day to ground zero for an interfaith tribute to the Sept. 11 victims.

After praying before the waterfall pools that mark the footprints of the fallen twin towers, Francis met with relatives of the 3,000 victims whose names are inscribed on the waters’ edge.

Moving into the underground memorial museum, he joined a rabbi, an imam and other faith leaders to pray for peace, standing in front of the floodwall that became a symbol of New York’s resilience when it held fast after the attacks.

Among those on hand was Monica Iken-Murphy, whose husband, bond trader Michael Patrick Iken, died inside one of the towers.

“This is where loved ones lost their lives … and this is the way we are going to honor them by having someone who is holy, closest to God, Pope Francis, come here and bless this site,” Iken-Murphy said. “I couldn’t be prouder to share this memorial and museum with him.”

Francis’ afternoon schedule reflected the penchant of the “people’s pope” for engaging with the public, starting with a visit to Our Lady Queen of Angels School, set amid public housing in the heavily Hispanic neighborhood of East Harlem.

The pope chose the venue knowing that the parish church that ran the school was closed in 2007 as part of a broad, money-saving reorganization in the Archdiocese of New York.

The crowd in the school gym included about 150 immigrants and refugees, some of them in the U.S. illegally.

Jose Gomez, 17, from Lempira, Honduras, arrived in New York three weeks ago with four other boys after weeks of traveling overland from Mexico. He left behind his parents and six younger siblings.

“They wanted me to come and study and have a better life,” Gomez said in Spanish as he fiddled with a wooden cross given to the guests.

Next on the itinerary was the processional drive through Central Park, the most public event for the pope while in New York. Some 80,000 people received tickets to watch Francis in his open-sided Jeep popemobile.

Later, a papal Mass was scheduled at Madison Square Gardens. Preceding the Mass was a faith-oriented concert, with performers including Jennifer Hudson, Gloria Estefan and Harry Connick Jr.

On Saturday morning, the pope flies to Philadelphia for a big Vatican-sponsored rally for Catholic families. As many as 1 million people are expected for the final Mass on Sunday.

The papal visit to the U.N. on Friday morning included a historic moment — the Vatican flag was raised at U.N. headquarters for the first time. The General Assembly recently agreed to allow the U.N.’s two observer states, the Holy See and Palestine, to fly their flags alongside those of the 193 member states.

Although his U.N. his speech on the environment and the economy carried messages that many liberals welcomed, Francis also affirmed the church’s doctrine on other issues.

He called for the “absolute respect for life in all its stages” — including the unborn. He cited “moral law written in nature itself” in insisting there is a natural difference between men and women. The Catholic Church has been on a campaign to denounce “gender theory” and the idea that people can choose their sex.

And he repeated his denunciation of the “ideological colonization” of the developing world — a reference to how Western ideas about contraception and gay rights are often imposed on poor nations as a condition for development aid.

Francis was greeted on his arrival at the U.N. by Secretary-General Ban Ki-moon, a key supporter of his eco-friendly message. Ban praised Francis for his moral leadership.

“You are at home not in palaces, but among the poor; not with the famous, but with the forgotten; not in official portraits, but in ‘selfies’ with young people,” he said. TVJ