Mayor of threatened Pag-Asa Island to speak in San Francisco 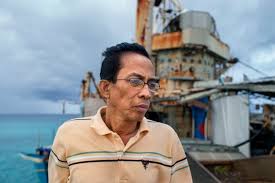 SAN FRANCISCO — Pag-Asa Island Mayor Eugenio Bito-onon, Jr. will speak on Friday, October 2, at the Social Hall of the Philippine Consulate (447 Sutter Street) at 6 p.m. to draw attention to the plight of the 288 Filipinos on his island, which is surrounded by China’s newly created man-made islands in the West Philippine Sea.

Mayor Bito-onon’s visit to San Francisco is jointly sponsored by the US Pinoys for Good Governance (USP4GG), the National Federation of Filipino American Associations Region 8 (NaFFAA R8) and the local Philippine Consulate.

“We are excited to meet Mayor Bito-onon in person and to hear from him about the challenges faced by the people of Pag-Asa,” Rudy Asercion, NaFFAA R8 chair said.

Mayor Bito-onon was recently featured on American television on July 15 when CBS News correspondent Seth Doane visited him in Pag-Asa where he told Doane that living on the island “is an exercise in sovereignty,” as, he said, “each home, each citizen, each birth or marriage on Pag-Asa helps my country stake its claim on the land.”

CBS News reported that Pag-Asa is just 13 miles from one of the islands the Chinese have been expanding. A third Chinese man-made airstrip was recently spotted near Pag-Asa.

“Before, tension was not so heightened,” Bito-Onon told the CBS reporter, “but just lately in the past three years it has become more heightened.”

He said the Chinese have escalated their “bullying” and “harassment” of the islanders, describing the constant appearance of Chinese warships passing not far from their shores.

In his talk at the forum at the Philippine Consulate, Mayor Bito-onon will describe China’s destruction of the coral reefs in the West Philippine Sea. 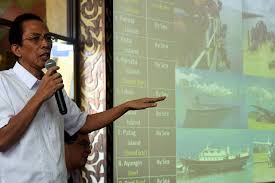 Bito-onon explaining the growing tension near his island.

These are vital ecosystems being reclaimed and turned into militarized airstrips by China, threatening the food security not only of Pag-Asa Island, but also of the entire country.

Instead of a military confrontation with China, Mayor Bito-onon seeks to promote investment and sustainable development of Pag-Asa, which he hopes to transform into an Eco-Tourism Zone that will be promoted by the Philippine government with the help of the global Filipino Diaspora.

“Through the development of tourism and fisheries as well as other peaceful civilian development, we hope to discourage China from encroaching into our island,” said Mayor Bito-onon.

For more information about the Mayor Bito-onon Forum at the Philippine Consulate, call 415.334.7800.