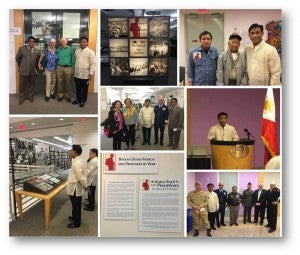 SAN FRANCISCO – Consul General Henry S. Bensurto Jr. on September 12 opened an exhibit entitled “World War II in the Philippines – A Legacy of Two Nations,” at the San Francisco Main Library to commemorate the 70th anniversary of the end of World War II.

“A captive nation had united under bondage to fight in support of the Americans who had once been their conquerors… white and brown brothers who went cold and wet and hungry in tropic mud, who might have given up but did not, who joined forces and grew and survived against incredible opposition, thinking the same thoughts, sharing the same dreams, fighting for the same ideals – equality, fraternity liberty,” said Bensurto, quoting the late Carlos P. Romulo.

The event was attended by Bataan Death March veteran David Tejada, civilian WWII survivors, members of the Coast Guard, the consular corps and the press.

Through the efforts of Bataan Legacy Historical Society (BLHS) and Memorare Manila 1945, artifacts and memorabilia from World War II will be on display at the San Francisco Public Library’s Filipino American Center, found on the third floor, until January 9.

The exhibit’s aim is to educate the public about the Philippines’ pivotal role during the War, and to bring greater awareness on the importance of including the Bataan Death March in the social sciences curriculum for Grades 7 to 12.

The Death March symbolized the heroism and suffering of Filipino and American soldiers as they put up a gallant stand against Japanese forces, stated the organizers of the exhibit. “That stand allowed the Americans time to regroup and eventually turn the tide of war in favor of the Allies, eventually affording the Philippines its freedom. Had it not been for that sacrifice, the world as we know it would have been significantly different.”

In his remarks, Bensurto recounted how San Francisco played a part in the shared history of the Philippines and the U.S.

It was in San Francisco that ships were manufactured and sent to the Philippines to maintain its hold in the Pacific. Bensurto added that “celebrating this important milestone in San Francisco, the seat of global technology, gives the event a poignancy, as we try to put back a human face and heart into this event,” where roughly 66,000 Filipino soldiers and 12,000 American soldiers were forced to take the deadly 145-kilometer walk from Mariveles, Bataan, to San Fernando, Pampanga.

He encouraged those in attendance to let show support of Assembly Bill No. 199, to amend Section 51221.3 of the Education Code, relating to school curriculum, so that implementation is ensured in middle schools throughout California.

Vice Admiral Charles Ray stressed the importance of eternal vigilance, as history is wont to repeat itself. He mentioned that there is always an opportunity for others to do harm, recalling that the U.S. celebrates the 14th anniversary of 9/11, and that it was important for nations to work cooperatively to achieve the shared value of freedom.

Ray added that the Philippines and the U.S. continue to deepen relations through engagement in exercises such as the establishment of a coast watch system, and the transitioning of two coast guard cutters to the Philippines, which are now patrolling Philippine seas.

BLHS Founder and Executive Director Cecilia Gaerlan explained how she has been working with the California Department of Education to implement AB 199, and encouraged those present to support the implementation to ensure that each child appreciates the value of freedom, which was bought by the sacrifices of the lives of thousands of Filipino and American soldiers.