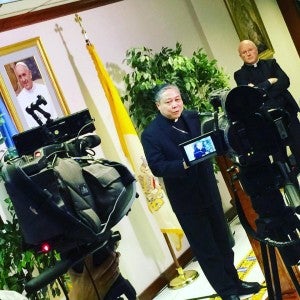 Press briefing with the Papal Nuncio in anticipation of Pope Francis’ visit to New York City. PHOTOS BY ELTON LUGAY

NEW YORK CITY — The entire city is bracing this week not only for world leaders attending the United Nations 70th General Assembly, but also for the first U.S. visit of His Holiness Pope Francis. The twin events are expected to make commuting a nightmare, but many in the Filipino American community are in a state of euphoria.

“After his heartwarming visit to the Philippines early this year, Pope Francis’ trip to New York and Philadelphia will be the highlight of this year’s spiritual events for the Filipino Americans,” Philippine Consul General to New York Mario de Leon Jr. told INQUIRER.net. “The Filipino community is anticipating with grateful spirits the arrival of the Holy Father Pope Francis to the U.S.”

The consulate has kept the community in the loop about opportunities to see the Pope. Consular officers and staff will be positioned along Fifth Avenue and Central Park to witness the papal procession along with a crowd expected to be in the millions.

“I myself have the honor of being one of the six seated delegates during the speech of Pope Francis at the U.N. General Assembly on Friday. Along with my wife, I will also attend the Papal mass in Philadelphia on Sunday,” De Leon revealed.

In a press briefing yesterday, Archbishop Bernardito Auza, permanent observer of the Holy See to the U.N., said that in addition to addressing the 193-member general assembly on September 25, the Pope will speak to U.N. staff and hold four private meetings.

Russian President Vladimir Putin, whose country chairs the U.N. Security Council this month, will be in one of the private meetings.

“The Vatican flag will be raised for the first time at the United Nations just before Pope Francis arrives on Friday morning,” Bohol-born Auza told a room full of press people from both mainstream and Filipino America media. “This, without any ceremony,” he added. 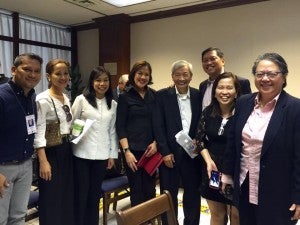 Fil-Am media personnel attend the briefing at the Holy See Mission in Manhattan.

The archbishop answered press queries including concerns on security, living accommodations of the pontiff at the papal nuncio’s official residence on 72th Street near Fifth Avenue. The building underwent wiring and plumbing upgrades in advance of Pope Francis’ visit, according to earlier reports.

While Vatican officials are reportedly not concerned about the Pope’s safety, city officials seem to think otherwise. Protecting Pope Francis is their utmost concern, prompting a proposal to build walls along Fifth Avenue to protect the pontiff from the crowds. The move is said to have dismayed the Pope.

Meanwhile, at a noontime press conference at City Hall, New York City Mayor Bill de Blasio said the Pope’s visit is “going to be a joyous, exciting and an inspiring week for New Yorkers as we welcome Pope Francis.”

In New York, the pontiff’s public schedule includes arrival on September 24 at Kennedy Airport and a 6:45 evening prayer at St. Patrick’s Cathedral.

On Sept. 25, Francis will be at the following events:

4 p.m.—Visit to Our Lady Queen of Angels School in East Harlem

The pope will leave New York for Philadelphia on September 26.