OFW cleared of allegations that she stole winning lottery ticket 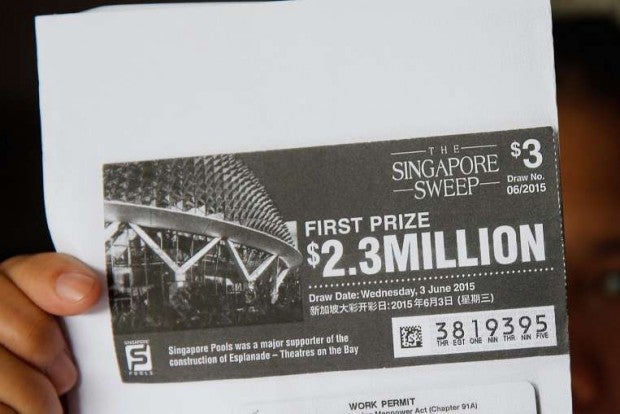 Len (not her real name), won $2.3 million in the Singapore Sweep in June. She has been cleared of allegations that she had stolen the winning ticket. ST PHOTO / CHEW SENG KIM

A maid who won $2.3 million in the Singapore Sweep in June has been cleared of allegations that she had stolen the winning ticket.

For the last three weeks, Ms. Len (not her real name) could not access her winnings as her bank account was frozen as a matter of procedure while the police did their investigations. The police called Len on Thursday evening to tell her that her bank account is no longer frozen.

“I never stole the ticket,” said a relieved Len, 44, adding that she cooperated fully with the police.

After a report was lodged last month by an unidentified person claiming that the winning ticket was stolen, she complied with police requests to hand over details of her bank account. She also took them to the Tampines outlet where she bought the ticket.

When her account was frozen, it was difficult for Len to remit money back to the Philippines. “We live in the village and we are very poor. My family, and my old parents, are waiting for me to send money back for food and school expenses,” she said.

Over the past 14 years working for her current employer in Pasir Ris, she would keep $50 for her own expenses and send the rest of her salary to her husband and their two children.

The money also goes to her parents and her in-laws who are sick and have no money for treatment, added her employer, a 62-year-old customer service officer.

“It has been very frustrating for (Len),” said her employer, adding that Ms Len has always been honest during her employment.

Len has already transferred part of her winnings to her children and bought a plot of land in the Philippines. She plans to build a house on it for her children.

The mother of two will also give some money to her relatives and friends to help them out. The rest will be saved for her 22-year-old daughter and 23-year-old son’s future, she said. Meanwhile, she will continue to work for her employer.

“I did not steal (the ticket),” Len insisted.

“I am a very simple person and I don’t want any attention. I (just happened to) strike the lottery.”