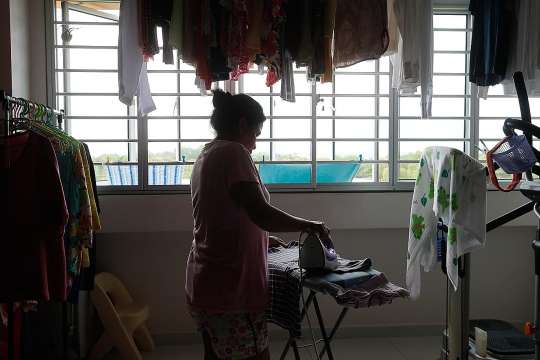 Len (not her real name), who has been working for her current employer for 14 years, intends to continue working for him. The Straits Times/Asia News Network

A maid who won 2.3 million Singaporean dollars in the Singapore Sweep insists she has done nothing wrong, after police received a report from another person claiming that the winning ticket was stolen.

Len (not her real name) told The Straits Times that she bought a Singapore Sweep ticket at a Tampines Singapore Pools outlet in June, while on her way to help a friend remit some money to the Philippines.

That same night, the maid said she got the surprise of her life when her ticket won the lottery’s first prize, making her an instant multi-millionaire.

The 44-year-old, who has worked for the same family in Pasir Ris for 14 years, claimed the prize money, deposited it into her bank account here and transferred some of it to her 22-year-old daughter and 23-year-old son in the Philippines.

But last month, three officers from the Ang Mo Kio police division came to the flat where she works.

She said they told her that someone had lodged a report claiming ownership of the winning ticket and that it had been stolen.

Her employer’s son was with her at the time the police were questioning her.

She said she was upset by the news, but has complied with requests to hand over details of her bank account.

She also told police where she bought the winning ticket and showed them receipts for the money transfers she had made.

She took them to the Tampines outlet where she bought the ticket.

She stayed outside with one of them while the others went into the shop. “When they came out, they said the security camera video of me buying the ticket had been erased,” she said.

Len then offered to take them to the nearby shop where she had helped her friend to remit money, but the officers told her that it was not necessary.

They then took her back to their police vehicle where they asked her more questions.

Since then, they have called her at least four times, asking her for other details such as phone numbers of her friends.

While she still has her winnings, the investigation has left her very worried. “I kept asking the officers to tell me who was accusing me of stealing the ticket, but they wouldn’t say,” she said.

She added that the police had asked her to go to the police station. But she declined, as she believes she had answered all their questions.

In response to queries from The Straits Times, the police confirmed yesterday that a report had been lodged and “that investigations are ongoing”.

Len’s employer, a 62-year-old customer service officer, does not believe she did anything wrong.

“She has been honest with us and she’s a very nice person,” he added.

Len said she has bought a plot of land in the Philippines and plans to build a house on it for her children.

She plans to save the rest of the prize money for their future.

She also intends to keep working for her employer for now.

“They are family to me,” she said. KS