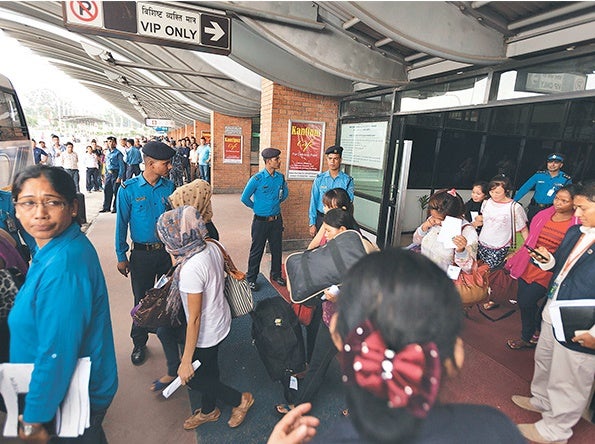 It came as a shock to many when two Nepali women—a 26 and 48-year-old—recently disclosed that they had been used as “sex-slaves” in Gurgaon, India.

Even more appalling was that the accused was a high-profile Saudi diplomat based in New Delhi. The duo, lured into foreign employment by a village agent with the promise of jobs as housemaids, in Saudi Arabia, were allegedly kept in confinement for three months, often without food and water. They have further accused their employer of forcing them to have sex with multiple guests of the household.

Ever since the shocking disclosure, the women’s stories have drawn widespread attention of the media in Nepal, India and abroad. Although the media, civil society and right groups have since been mounting pressure on the Indian government to ensure proper justice to the victims, it remains to be seen what will happen next, as the accused diplomat has already left India, protected as he is by the Vienna Convention on Diplomatic Relations.

“But even as the two Nepali women fight an uphill battle for justice in another country, stakeholders here in Nepal, including the state, seem indifferent to their plight,” says Ganesh Gurung, a foreign employment expert.

Not an isolated case

Hundreds of Nepali women migrants endure similar or worse forms of suffering every year. In just the last three months, the Nepali embassy in Riyadh, Saudi Arabia, has rescued and repatriated 25 Nepali women who were suffering sexual, physical and economic exploitation. But although hundreds of Nepali women have been victims of exploitation in the past, none of the accused, both Nepalis and foreigners, have been held accountable for the wrongdoings, say embassy officials.

The stories of such problems seldom become public knowledge because most victims choose to remain silent, afraid of the stigma they will have to live with should their stories get out. Some do dare to go public with their stories, but that has often led to only indifference and not the expected just reaction.

Reports of the smuggling, abuse and exploitation of Nepali women across various parts of the globe in the past year have become far too frequent. In January 2015, India’s Central Bureau of Investigation revealed that at least 8,000 young Nepali girls were trafficked to the UAE in 2014, to be sold into prostitution, via New Delhi’s Indira Gandhi International Airport, by an organized trafficking racket. In July 2015, 21 Nepali women bound for the Gulf were sent back home from Indira Gandhi International Airport because the Indian police suspected that they were being trafficked.

Only this week, 40 Nepali women were repatriated from Lebanon after their agents abandoned them halfway. Hundreds of Nepali women have returned home in recent months with bitter experiences of overseas employment in various war-torn zones in the Middle East and in African countries such as Tanzania and Kenya.

These cases, which come against the backdrop of a blanket ban on domestic workers that has been in place since July 2014, serve only to reiterate that restricting the mobility of women, especially in a country with a dysfunctional state like Nepal, is not a solution. Nepal’s policies on overseas employment are proving to be more helpful for agents and traffickers than for its intended beneficiaries.

It is important to treat the Gurgaon incident and several other isolated cases in a wider context in order to understand why women continue to become victims of trafficking. Many young women today see employment, rightly, as a prerequisite for independence. However, due to the lack of opportunities inside the country, Nepali women, who constitute 51.50 per cent of the total population, are finding foreign employment the easier, more lucrative option.

“The government has disappointed women workers in many ways,” says Ganesh Gurung. “It seems that the state is incapable of providing jobs at home and facilitating in the safe migration of women workers.” The state has, in order to protect women from abuse and exploitation, invested itself in formulating various restrictive laws and policies such as the blanket ban and age restrictions. Such shortsighted policies, however, have left female overseas aspirants

with little choice other than to turn to agents to go abroad. “The state’s corrupt and dysfunctional mechanism has proved a boon to these agents, who are easily providing seemingly safe passage to female workers via Indira Gandhi Airport and Tribhuvan International Airport,” says Ganesh Gurung.

Although the Department of Foreign Employment issued work approvals for 22,028 women in the fiscal year 2014/15, the actual number is believed to be much higher. In 2012, the Nepali embassy in Riyadh had estimated the number of Nepali women working in Saudi Arabia to be around 70,000, although during the same time, domestic workers were banned by the embassy from working in the country. Similarly, an estimated 40,000 Nepali women are also currently working in the Iraqi autonomous province of Kurdistan, and a further 20,000 are in Lebanon.

Part of the reason that agents are popular in Nepal is that they not only promise a safe passage for the women, but also offer citizenship and passport services, and financial guarantees such as advance payment to the families of workers. Such agents have found an exploitable market among the women of lower and lower-middle class families. According to experts, most of these agents are close relatives, family friends or neighbours, hence making it easier for the victims to fall prey.

State Minister of Labor and Employment Tek Bahadur Gurung says the government has been working to lift the ban on domestic workers. The Ministry of Foreign Employment has formulated a new guideline for this purpose, which although yet to be enforced, allows women only above 24 years of age to apply for domestic jobs abroad through recruiting agencies. It also includes provisions of minimum wages, annual leave and other benefits. “The new measures can promote safe migration,” says Gurung, who believes that the guidelines will put an end to the issue of exploitation. He also says that the government is preparing primarily to lift the ban, and then to sign a separate Memorandum of Understanding concerning women who work in the domestic sector abroad.

However, it is still far from clear whether the labour-receiving countries will follow these guidelines in the absence of any agreement that holds them responsible for Nepali women. It would therefore be wise to sign a labor agreement concerning domestic workers with the receiving countries before the ban is lifted. Such an agreement should bind employers in these countries into authorizing embassy officials to audit the conditions of these workers, and to inform officials of the current state of workers within specified periods of time.

Such measures are very important to protect Nepali women, especially in countries such as Saudi Arabia, where domestic workers are not subject to preexisting laws. The current Islamic Sharia law that applies to the domestic sector, which does not allow embassy officials to conduct periodic audits, does not just enable employers to abuse Nepali women workers, but also strips them of minimum wages, weekly rest days and other social benefits.

“While such laws and measures are necessary in order to guarantee women workers’ protection, it is even more important to reform Nepal’s own recruitment system,” says Ganesh Gurung. The crux of the issue lies in the country’s mushrooming middlemen culture. It is important for the government to expand its presence at the ground level, increase scrutiny of the open border, and at Tribhuvan International Airport. Experts have said that while recruiting agencies should be allowed to send women workers abroad, the state must oversee manpower agencies at every level of the process, and that if the results are no different from the status quo, it must take foreign domestic employment into its own hands.

“Much of the fate of our foreign employment depends on the state’s commitment to protecting and promoting the rights of workers,” says Gurung, who stresses the point that policies are only as effective as their implementation.