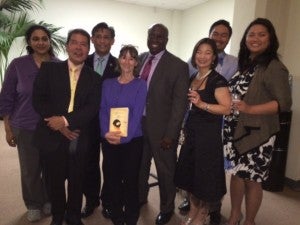 SAN FRANCISCO — “We need to bring more awareness about domestic violence and human trafficking to get more Filipinos involved in resolving these problems as a community,” Consul-General Henry Bensurto, Jr. said in his opening remarks at the “Saving Beverly” fundraising event held on June 5 at the Philippine Consulate here. Bensurto expressed the Consulate’s commitment to partner with organizations around this cause.

“Saving Beverly” is a campaign to bring awareness to the plight of victims of domestic violence and human trafficking. The drive began when a San Diego, California group sponsored a “Saving Beverly” gathering last year, inspired by the novel Mango Bride, the first book by award-winning author Marivi Soliven Blanco.

Explaining the genesis of the campaign’s name, Soliven Blanco said many women had confided in her that they could relate to “Beverly,” one of the two main characters in her novel, whose dreams for a better life in the U.S. turned tragic after enduring years of physical abuse from her American husband, whom she had met by mail. 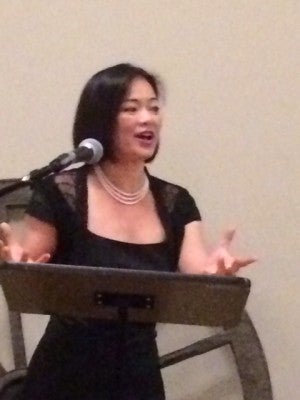 The idea for her book started in Berkeley 17 years ago, before the age of email. “I was flabbergasted when I saw an ad in the East Bay Express, encouraging men looking for love to write to women in the Philippines for a five-dollar fee per woman.”

Through her job as a Tagalog interpreter on a domestic violence hotline, Soliven Blanco, who now lives in San Diego, became knowledgeable and passionate about the plight of Filipino immigrant women suffering from domestic violence, leading to her penning Mango Bride.

Former U.S. Ambassador to the Philippines Harry Thomas, Jr., the evening’s keynote speaker, stated, “Domestic violence and human trafficking are not unique to the Philippines.” He cited tragic examples from countries he had visited during his course of duty.

In the Philippines, he welcomed hopeful developments, such as the establishment of an organization in Baguio called SAVE Our Women, which provides a safe haven for victims of domestic violence. In New York, the Damayan Migrant Workers Association assists Filipino domestic helpers who need housing and legal assistance.

Thomas said that in Arizona there is a growing problem among Filipinos, who now make up the largest Asian group in that state. He noted with alarm that almost 50 percent of human trafficking victims there are Filipinos, mostly employed in the elderly care industry.

“While they enter the country with working visas, they are subjected to low pay and poor living and working conditions,” Thomas reported. He added that because of their vulnerable status, these workers hesitate to work with groups like the International Rescue Committee, which assists people caught in the exploitative web of human trafficking.

Aimee Santos Lyons is a victim of domestic violence, but unlike “Beverly” she has survived her nightmare of abuse. Santos Lyons is now in a loving relationship, and she and her husband are raising three children. Now a director of programs at a non-profit organization in Portland, Oregon, Santos Lyons said that she first hesitated to speak on her experiences as a survivor of domestic violence but changed her mind when she realized that silence contributed to the culture of violence.

She related, “A year after we were married, my ex-husband turned violent and, with a knife in his hand, threatened me that he was not going to give me custody of our son.” 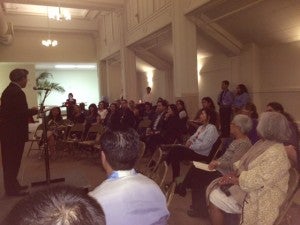 Instead of keeping the problem to herself, she started calling a friend, who patiently listened and believed in her, becoming her “hotline.” Having this kind of support gave her the courage to leave the marriage and find a safe place for her and her son.

The Immigration Center for Women and Children (ICWC) and Asian Pacific Islander Legal Outreach (APILO), the Bay Area beneficiaries of the fundraiser, provide the type of services needed by women like Santos Lyons.

Susan Bowyer, the deputy director of the ICWC, shared the case of Maria, an undocumented farmworker in northern California, who suffered repeated beatings from her husband.

After the abuser was finally charged and deported, the ICWC helped Maria apply for an immigration status through a legalization process within the Violence Against Women Act. Bowyer reported that Maria has since become more involved in her community and has just received her permanent resident status.

Leah Chen Price, the director of APILO’s Anti-Trafficking Project said that. not having an immigration status often prevents women from leaving their abusive situations.

She described their direct legal services, outreach and advocacy to survivors of domestic violence and trafficking, which are culturally and linguistically appropriate for immigrant clients.

Arati Vasan, an attorney at APILO, noted that they take into consideration the cultural barriers that often keep Filipino and other women from seeking refuge from violence, such as being told, “It’s better for the kids if you stay,” or “Domestic violence does not happen in our community.”

Vasan commended the Philippine Consulate’s willingness to provide interpreters to their Filipino clients.

Before performing his musical selections, Ro Ambrosio Birco, a Cantor and Assistant Organist at Mission Dolores Basilica, revealed that he was not aware that his family had been affected by domestic violence until he read Mango Bride the night before.

Birco dedicated his a cappella rendition of Frank Sinatra’s song “My Way,” mentioned in Blanco’s book, to his mother and all those affected by domestic violence. He also played on the flute the lilting “Flor de Manila” (Sampaguita) by Dolores Paterno.

Michael Magnaye, who organized the fundraiser, ended the program on a high note, saying the gathering was a testament to how different groups could coalesce to fight domestic violence and human trafficking,

The development director at the National Council on Crime and Delinquency, Magnaye stated, “Tonight we see the power of unity and action. Diplomats, community activists, philanthropists, writers, artists, lawyers, non-profit and tech workers, and members of the community at large have come together because we all care about our immigrant kababayans, whose voices need to be heard.”