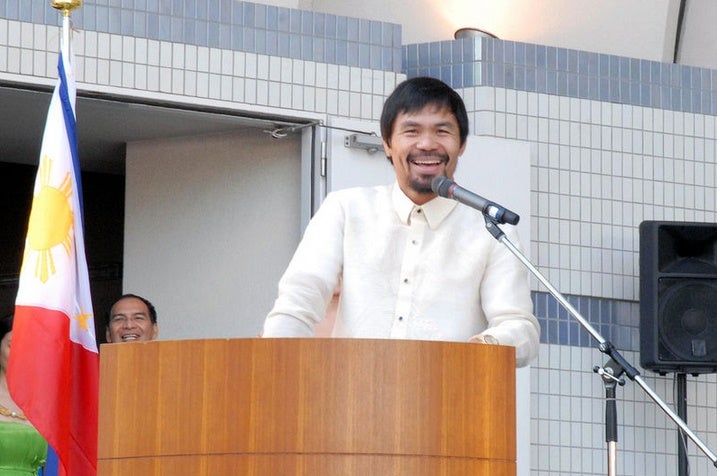 Manny Pacquiao gives a speech at the opening ceremony of the Philippine Festival 2015 in Shibuya Ward, Tokyo, on Saturday. PHOTO BY THE JAPAN NEWS

TOKYO, Japan — Hundreds of Filipino and Japanese fans exploded with joy as they welcomed Manny Pacquiao — the first and only eight-division world boxing champion — as a special guest at the Philippine Festival 2015, which was held for two days through Sunday in Tokyo.

Featuring colorful performances and Philippine cuisine such as adobo, the annual festival was held in Yoyogi Park in Shibuya Ward, with the aim of boosting Japanese tourism to the tropical country.

At the festival’s opening ceremony on Saturday, Philippine Ambassador to Japan Manuel Lopez said, “The Philippines has become a tourism hot spot in recent years,” referring to the opening of many new hotels in the country.

Wearing formal barong tagalog attire, Pacquiao then made a speech in Tagalog and English, as onlookers shouted “Manny” and roared their applause. The boxing legend expressed his appreciation for the warm support he receives from Filipino communities around the world when he fights in other countries, saying that hospitality is one of “the Filipinos’ most remarkable qualities.”

“Filipinos are so amiable … Filipinos’ smiles are a trademark of our tourist industry,” he added. Pacquiao is regarded by Filipinos as a national hero, even after losing by unanimous decision to U.S. boxer Floyd Mayweather, Jr. in a welterweight title fight in Las Vegas in May.

Pacquiao encouraged Filipino expats to support their families financially, saying, “No matter where you go, you bring with you not just your family name but your country’s pride.”

Pacquiao also said Filipinos living overseas do not have to feel alone or far from home because Filipino communities have been established in many countries.

At the end of his speech, Pacquiao revealed his future plans to open a gym in Japan in cooperation with a Japanese partner. The news excited attendees of the festival, some of whom wore T-shirts with Pacquiao’s face or held the Pacman video game character, from which Pacquiao got his nickname.