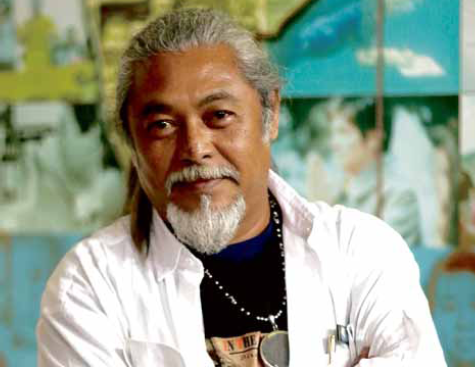 Politicians can learn a thing or two from Kyaw Thu, a popular movie actor in Burma (Myanmar) who gave up the glitz and glamour of show business to help his poor countrymen bury their dead for free.

As a multiawarded movie actor and director, Thu, 55, had legions of fans, a following that could catapult him to power, and his good deeds at the Free Funeral Services Society (FFSS), which has expanded to other social services for Burma’s poor, gained global recognition.

But Thu had no political ambitions and preferred to stay away from politics to remain clean and keep his philanthropic work unsullied by corruption.

“In my opinion, politics is so complex and corrupt that you cannot really do things truthfully,” said the 2015 Ramon Magsaysay (RM) Award winner in an interview with the Inquirer through an interpreter last week.

“I don’t want that dirty political life. But in my social work, I can really do things and reach out to the people with a true heart,” said the burly Thu, who sported a beard and wore his long silver hair in a ponytail.

Thu is a scion of wealthy family in the movie industry who made more than 200 films during his career that spanned more than two decades.

In 2001, he found a more meaningful way of using his celebrity by launching the FFSS in Rangoon (Yangon) in collaboration with a friend, the late, multiawarded Burmese writer and director U Thu Kha, to ease the emotional and financial burden of the poor in burying their dead.

Although the head of the FFSS, Thu himself carried coffins and drove the hearse, breaking taboos and lending a more human touch to handling the dead and the costly funerary rituals steeped in superstition.

“Having an actor carry the coffin of dead loved ones is also one way of sharing in and easing the sorrow of the bereaved families… so I [do that] as an actor to help them lessen their suffering,” Thu said.

Having a movie producer for a father and meeting celebrities all through his youth had lured Thu to the silver screen. Movie offers came when he was in high school, but entertained them only after he left college to elope with his girlfriend, Myint Myint Khin Pe.

“My father then said [since I was starting a family], I had to do something [for a living] so I started acting in movies,” he said.

Like any rising star, Thu craved publicity and chased after money and fame. In 1994, he won the Myanmar Academy Award for best actor for his role in “Da-Byi-Thu Ma Shwe Hta” and nine years later for best director for the film “Amay No-Bo.”

But a more noble calling took him out of the glamorous and often vice-laden film industry when his daughter, while attending a children’s Buddhist literature class at a monastery one summer, asked a monk where actors went in the afterlife.

The monk replied that actors may end up in hell because they evoked a whole range of emotions, from joy to sadness to anger, in people, which was considered a “misdeed” in Buddhism.

“It really frightened me so since then I started studying Buddhist literature. I became more religious and I started to help people,” said Thu, a devout Buddhist.

Growing more aware of the poor’s difficulty in giving their dead a decent burial, Thu found it compelling to ease their plight.

He said the poor would often resort to “unethical” ways to bury their dead, sneaking into private property and farmland at night to give their deceased loved ones a permanent resting place.

“At times we could see the dead just lying there on the street not claimed by the relatives or the family. It’s really not nice to see this so it is really important for us to give free funeral services,” he said.

Thu and his friend Kha launched the FFSS on Jan. 1, 2001, covering all burial services for the poor.

Since then, the FFSS has undertaken nearly 150,000 free funeral services across Burma, serving those in need regardless of class, race or religion.

The FFSS also has become a provider of free medical services for the poor. With 50 volunteer doctors and 104 paid staff, the organization provides various medical services, including eye surgery, maternal and dental care, and blood transfusion.

In 2009, the FFSS opened a school to provide free vocational training for children of the poor, review classes for academic qualification examinations and a library.

The FFSS also provides disaster and humanitarian assistance to refugees and to victims of natural disasters and war.

All these services are sustained through private donations and volunteer work.

The organization’s success has inspired others in Burma, including government agencies, to offer free social services and form other self-help groups.

“As an actor and writer, I just craved for popularity and fame but as a social worker… it is all about selfless giving and compassion. So if you compare the two in terms of satisfaction level, it’s like heaven and earth,” Thu said.

Thu has also extended his philanthropic work to other causes.

In 2007, he supported the Saffron Revolution by distributing food and water to protesting monks. Recently, he mobilized ambulances to help student demonstrators protesting against restrictive government policies.

Perceived by many in his country as an exceptional figure in the nation’s uneasy and complicated shift to democracy after decades of military rule, political repression, economic stagnation and social disorder, Thu has made the authorities wary of him and he has had his share of hardships.

He and his wife had been detained, their passports confiscated, preventing them from visiting their two children abroad.

He was suspended from acting and movie making in 2007 and was allowed to make a comeback only recently.

Government agents still follow him around while he is doing his social work.

“Although we are rendering free services, it’s not really an easy work because of the authorities. They stop us a lot. [While] the public trusts us and donates to us, authorities prohibit us,” he said.

But Thu pressed on, moving the Ramon Magsaysay Foundation to recognize him for “his generous compassion in addressing the fundamental needs of both the living and the dead in Myanmar… and his channeling personal fame and privilege to mobilize many others toward serving the greater social good.”

Thu said he had not known that the RM Awards existed and only learned that it was Asia’s version of the Nobel Prize when his two children, one an engineer and the other a doctor living abroad, did the research for him.

“I was happy to find out that it’s really a systematic kind of choosing an awardee, [involving] a year’s worth of research because normally, if you are popular, people will just give you the award and it shouldn’t be that way,” he said.

He believed that the award will somehow encourage young people to devote themselves to social work.

“This prize will help boost people’s interest in social work… so when I die, this kind of [social work] will continue,” he said.