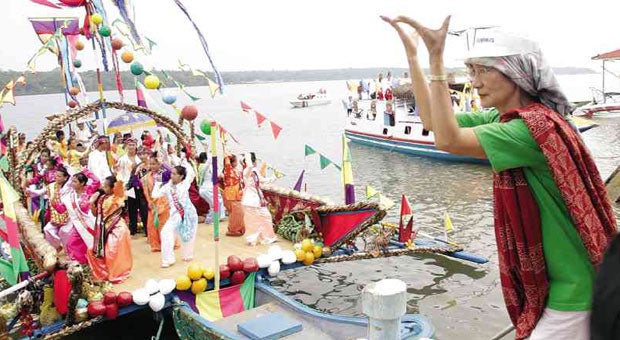 DANCE OFFERING Ligaya Fernando-Amilbangsa, one of this year’s Ramon Magsaysay Awardees, performs the “pangalay” (gift offering) during a Muslim festivity in her adopted home in Mindanao. She is cited for her study, conservation, practice and promotion of the pre-Islamic dance tradition. CONTRIBUTED PHOTO

Her parents had strong reservations about her marriage to a Muslim datu, but it eventually led Ligaya Fernando-Amilbangsa to a lifetime crusade that earned her this year a Ramon Magsaysay Award, often regarded as Asia’s equivalent of the Nobel Prize.

The 72-year-old widow was cited for her “single-minded crusade in preserving the endangered artistic heritage of southern Philippines, and in creatively propagating a dance form that celebrates and deepens the sense of shared cultural identity among Asians.”

The award foundation named after popular Philippine President Ramon Magsaysay also announced on Wednesday the other 2015 RM Awardees. They included India’s Sanjiv Chaturvedi, 40, who won the award for emergent leadership for his “exemplary integrity, courage and tenacity” in exposing government corruption in his capacity as a forest service officer in 2005.

India’s Anshu Gupta, 44, whose volunteer group provides clothing and other recycled articles to the poor and makes inexpensive sanitary pads for women, was cited for “his creative vision in transforming the culture of giving in India.”

Kommaly Chanthavong of Laos, 71, was awarded for his work in reviving the ancient art of silk weaving and creating livelihoods for thousands of poor Laotians displaced by war, while “preserving the dignity of women and her nation’s priceless silken cultural treasure.”

Also named to the awards that include a $30,000 prize is popular and award-winning actor Kyaw Thu of Burma (Myanmar). The 55-year-old formed a group with a movie colleague to provide free funeral services to help relieve the emotional and financial burden of the poor. He was recognized for “his generous compassion in addressing the fundamental needs of both the living and the dead in Burma.”

The ceremony for the RM Awards will be held in Manila on Aug. 31, the birth anniversary of President Magsaysay, who perished in a plane crash in 1957.

Born to a prominent Catholic family in Marikina City that includes younger brother and former MMDA Chair Bayani Fernando, the young Amilbangsa was of poor health and turned to the arts to relieve the ennui of being kept mainly indoors.

“To build her muscles and bones she took up ballet; for strong lungs, she learned voice. She also played the piano, practicing diligently by herself for up to four hours,” quoted a story on Amilbangsa in the Sunday Inquirer Magazine’s March 27, 2005, issue.

It was through her interest in the arts that the English major from Far Eastern University met her future husband, Datu Punjungan Amilbangsa, who was dressed as a dapper Moro groom in an art exhibition that included a Muslim wedding booth. When the couple married and moved to Sulu province, Amilbangsa spent the next 30 years immersing herself in the rich cultural life of the Muslim South.

In the midst of the region’s secessionist and insurgent conflicts, the young bride turned her love for the arts into a vocation as a cultural researcher, educator, artist and advocate of the indigenous arts of southern Philippines.

Amilbangsa’s signature contribution to the arts has been “the study, conservation, practice and promotion of the dance style called pangalay (gift offering), a pre-Islamic dance tradition among the Samal, Badjao, Jama Mapun and Tausug peoples of Sulu and Tawi-Tawi provinces.

It was at a Muslim wedding in 1969 that she first saw and fell in love with the intricate and expressive dance of many variations, which is also considered the country’s living link to the ancient, classical dance traditions elsewhere in Southeast Asia.

When she saw the dance becoming a marginalized tradition, Amilbangsa patiently documented, developed and promoted it, even introducing to its choreography such contemporary themes as women’s rights and environmental conservation.

She also used her own resources to organize performing arts groups to present both traditional and innovative pangalay choreographies, taking care, however, to root the dance to its basic humanizing values.

“Without looking to the past, something really new cannot be created,” Amilbangsa said.