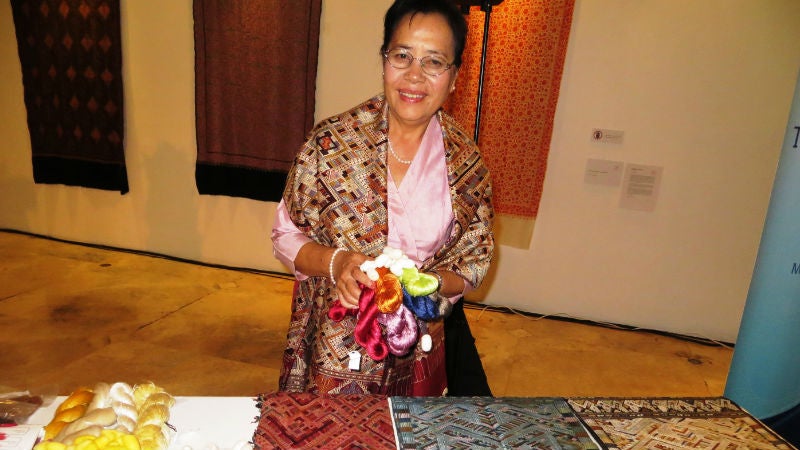 KOMMALY CHANTHAVONG of Laos, one of the five Ramon Magsaysay Awardees for 2015, scoops an armful of silk cocoons and spun silk thread dyed naturally in various colors and shows off hand-woven silk fabric with intricate designs. She was awarded for reviving the ancient Laotian art of silk weaving that gives livelihood for thousands of poor, war-displaced Laotians and for preserving her country’s priceless cultural treasure. (Photo by Ceres P. Doyo)

Like the various stages in the making of silk—from silkworms winding cocoons around themselves, to human hands unraveling and spinning them as thread, to the hand-weaving of the fabric with intricate designs—so has been the life journey of Kommaly Chanthavong, a Laotian woman who revived an art and cultural treasure that was nearly lost because of war.

Early in her life during the Indochina War, Chanthavong lost her father and also her childhood home. In 1961, she and her family fled their farming village in eastern Laos and walked 600 kilometers to Vientiane to escape bombings during the Vietnam War. The US bombing of the Ho Chi Minh trail had displaced communities.

Chanthavong was a refugee at 13, but a refugee with heirloom treasures hidden among her few belongings. She brought with her heirloom hand-woven silk handed down from her grandmothers.

From these she would later draw inspiration for her life’s important work—the revival of silk weaving in her native land that would help communities.

She had learned the art from her mother when she was only 5 years old. She was not going to let it fade away into the past.

On Monday, Chanthavong, 71, received the 2015 Ramon Magsaysay Award for “her fearless, indomitable spirit to revive and develop the ancient Laotian art of silk weaving, creating livelihood for thousands of poor, war-displaced Laotians, and in the process preserving the dignity of women and her nation’s priceless cultural treasure.”

The date marked the 108th birth anniversary of President Ramon Magsaysay, who died in a plane crash in 1957.

Chanthavong was one of this year’s five Asian awardees, the first Laotian woman and only the third from Laos to have received the award. She had received other awards for her work.

In the past 57 years, the award has been bestowed on more than 300 outstanding men, women and organizations whose selfless service has offered their societies, Asia, and the world successful solutions to some of the most complex problems of human development.

The venue was perfect—the Metropolitan Museum of Manila where “Renaissance: The International Festival of Extraordinary Textiles” was going on. Promoters of indigenous Philippine textiles and weaving, among them members of Habi (The Philippine Textile Council), came to learn from Chanthavong’s experience.

Chanthavong always wore hand-woven silk with brocade-like edges wherever she was invited while she was in Manila. She said that despite the laborious process of silk weaving, women in Laos take pride in wearing the sinh, their traditional dress. The intricate weave designs in Laotian silk are like no other.

With her daughter Boby as interpreter, Chanthavong described the interesting process of making silk and weaving the designs into it through traditional methods. She explained how long it took (weeks, months, depending on size and design) to weave a piece.

But just as interesting was Chanthavong’s silk journey. Though life was difficult in Vientiane, the young Chanthavong continued her studies. She later went to Thailand to study nursing. In 1972 she got married and started a family.

The communist takeover of Vientiane brought more hard times while she was doing business between Laos and Thailand.

Seeing the suffering of war-displaced, unemployed women moved Chanthavong to do something for them. She used her small savings to buy looms and started with a group of 10 women weavers.

Later the group grew to 450 in 35 villages. The Lao government noticed and, in 1980, leased to Chanthavong 42 hectares of bombed-out land northeast of Laos.

But first, the area had to be cleared of deadly, unexploded land mines. Here mulberry trees were planted, silkworms raised and put to work. The once highly acidic land was turned into a fertile valley. This was where Mulberries Organic Farm began.

The farm was not all about mulberry trees and silkworms. The farmers also planted vegetables and sources of natural dyes, and raised cattle that produced manure for organic fertilizers.

The farm became a big production workshop for various stages of silk production. Since its founding, the farm has trained more than a thousand farmers and created 3,000 jobs.

“One of the most beautiful things you can experience on earth,” a Mulberries invitation says, “is standing in the middle of a wide open and fresh green field of mulberry bushes, with the scent of moist soil and ripening mulberry fruit. This is where it all begins, where nothing will go to waste.”

There is mulberry the fruit and Mulberries the farm. There is Mulberries, the social enterprise founded in 1995 that initiates income-generating projects.

Thanks to Chanthavong’s industry and vision, silk production has expanded into something bigger. More people have been trained not just in weaving, but in other productive endeavors such as making mulberry tea, pies, wine and soap.

From these natural dyes, Chanthavong said, they can produce more than 100 colors and hues, “from autumn red to cranberry to faded pink, blue spruce to pistachio, harvest gold to chalk yellow, hot chocolate to malt.”

For the uninitiated, silkworms are not worms like the earthworm. They are the larvae or caterpillars of the domesticated silk moth (Bombyx mori).

This primary producer of silk is therefore a moth or insect in the making whose preferred food is mulberry leaves. The pupa (what becomes the silkworm after it has spun a cocoon around itself) can be a source of protein for humans and fowls.

Chanthavong continues to travel around Laos to provide training and set up silk houses. She sees to it that the silk products are world-class. Indeed, Mulberries products are. (Visit www.mulberries.org.).

Her husband and three children are all involved in the enterprise. Eldest daughter Boby manages the Lao Silk and Craft in Melbourne, Australia.

Chanthavong also founded the Phontong/Camacrafts Handicrafts Cooperative that linked up with fair-trade retailer Ten Thousand Villages so that silk products could be exported to the United States. This meant more income for skilled weavers.

Chanthavong looks beyond her own generation. “Our goal,” she said, is to strengthen the position of women by giving them a dependable income and thus improve the chances of their children.”