Calif. courts to firms — misclassfying workers will cost you 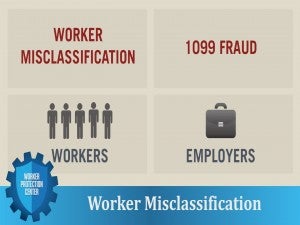 SAN FRANCISCO – Two recent legal victories for California workers send a strong message to employers nationwide: Misclassify your employees, and you will face the consequences.

Misclassification is a practice used by some employers to cut costs by declaring their workers to be independent contractors – ducking their obligations to pay at least the minimum wage and overtime pay, and legally required contributions to unemployment insurance and workers’ compensation funds.

These employers also fail to remit payroll taxes, resulting in huge losses to state treasuries, and the federal Social Security and Medicare programs.

The U.S. Department of Labor, which has made combating worker misclassification a major focus of its enforcement efforts, has announced that federal courts have ruled against two San Francisco Bay Area companies.

The courts sided with the companies’ employees after investigations revealed that the companies deliberately misclassified the workers as independent contractors to cheat them out of their wages and other critical workplace benefits.

National Consolidated Couriers Inc., based in San Leandro, California, but with clients across the country, has agreed to a court judgment requiring it to pay $5 million in back wages and damages to more than 600 drivers it misclassified as independent contractors, having cheated them out of minimum wage and overtime pay.

The judgment reveals that, during the course of the Labor Department’s investigation, the employer tried to destroy records showing an employment relationship with its drivers, and had been misclassifying the workers over at least five-year period.

In another major win for workers, a federal judge ruled that drivers for Mountain View-based Stanford Yellow Taxi Cab, Inc. were also misclassified. On its website, Stanford touts it strong relationships with corporate account holders such as Google and the Four Seasons and Rosewood hotels.

In this case, the department had to file suit to stop Stanford Cab from threatening and intimidating its drivers who were cooperating with investigators, including an instance where Stanford fired a worker just days before trial to discourage his witness testimony.

The court’s decision allows the department to continue with litigation, forcing the company to pay nearly $3 million in back wages and damages to dozens of drivers.

“Misclassification is workplace fraud, plain and simple,” said U.S. Secretary of Labor Thomas E. Perez. “It hurts workers by denying them a fair day’s pay for a fair day’s work, and it also undermines the competitiveness of businesses that are playing by the rules.”

Perez added, “At the Labor Department, through vigilant and vigorous enforcement, we are cracking down on irresponsible employers who game the system and cheat their employees – and that’s what they are: not contractors, but employees.”

In both the NCCI and Stanford Cab cases, the courts rejected arguments that the drivers were independent contractors in business for themselves as their employers alleged.

In the case of Stanford Cab, the company required drivers to be on the job six days per week for 12-hour shifts but did not compensate them for all of those hours. Stanford also did not allow drivers to change their schedules or operate independently by reaching out directly to passengers. Driver also had to abide by a dress code. They were and are employees under every reasonable interpretation of the law.

Wage and Hour Division Administrator Dr. David Weil, who in July issued official guidance to employers about avoiding misclassifying workers, said that his agency takes this matter seriously through education and outreach and a nationwide, data-driven strategic enforcement across all industries.

Typically, the Wage and Hour Division finds misclassification in low-wage industries. And while the misclassification of an employee as an independent contractor is not in and of itself illegal under the laws the department enforces, it typically leads to violations of the minimum wage and overtime provisions under the Fair Labor Standards Act which it does enforce.

In Fiscal Year 2014, Wage and Hour Division investigations resulted in more than $79 million in back wages for more than 109,000 workers in low-wage industries such as janitorial, food service, construction, day care, hospitality and garment.

The Wage and Hour Division currently has agreements with 25 states to jointly combat misclassification. The partnerships have led to better information sharing and coordinated enforcement to ensure resources are used strategically, effectively and efficiently to protect workers.

“As these court rulings indicate, the tide is turning against those employers who misuse independent contractor status to take advantage of workers,” said Regional Solicitor Janet Herold of the department’s Western Region, who litigated both cases. “The courts recognize the nature of this problem and stand ready to ensure that justice is served. America’s workforce deserves no less.”

The Fair Labor Standards Act requires that covered, nonexempt workers be paid at least the federal minimum wage of $7.25 per hour for all hours worked, plus one and one-half times their regular rate of pay for all hours worked beyond 40 per week. Employers also must maintain accurate time and payroll records.

Workers and employers can get more information about federal wage laws administered by the Wage and Hour Division by calling the agency’s toll-free helpline at 866-4US-WAGE (487-9243). Workers can also file complaints confidentially. More information is also available online at http://www.dol.gov/whd.