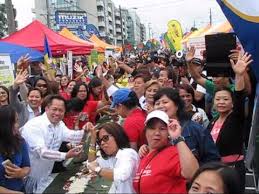 TORONTO, Ontario — Mark your calendars, foodies and Pinoy culture trippers!  Taste of Manila 2015 is coming to town on August 22 and 23.

Last year’s foodfest drew a crowd of more than 70,000; this year, organizers expect more than 100,000 spectators from the Greater Toronto Area, other places in Ontario, and from the United States.

The number of food vendors and exhibitors has doubled–from last year’s 100 to this year’s 200 who have already committed to be part of the event.

“The main stage will be right at the intersection of Bathurst and Wilson,” says Rolando Mangante, founder of Taste of Manila and chairman and CEO of the Philippine Cultural Community Center, the main sponsor of the event. 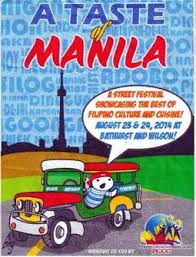 “The entertainment will be nonstop,” Mangante adds.  “A parade will start the festival on Saturday morning at 9 and the opening program begins at 10.  There will be singing and dancing competitions, street games, tribal dance exhibitions like the Ati-Atihan, all showcasing the uniqueness of Filipino culture,” he says.

“Filipino cuisine and street food will be offered by more than 50 food vendors, and get ready for the longest boodle fight,” Mangante shares.  “A boodle fight is when various kinds of food and cooked rice are arranged on banana leaves.  The leaves serve as plates and may extend for several feet, and participants eat with their hands and share the feast,” he adds.

On Sunday afternoon, special guests from TFC (ABS-CBN stars) will cap the festivities.

Queried on the inspiration behind Taste of Manila, founder Rolando Mangante explains that he wanted to “highlight the positive aspects of Filipino culture; it helps to boost morale and inclusiveness.”

Taste of Manila broke even last year, but this year, Mangante hopes to turn a small profit, which goes toward funding PCCC projects like the Youth Alliance for Filipino Canadian Youth and the Senior Citizens Program.

PCCC is a not-for-profit organization that provides services for the youth, seniors, newcomers, visitors and other members of the Filipino Canadian community. It is located at 3768 Bathurst Street, Suite 311 in North York. It welcomes donations toward its projects and issues tax receipts for donations of $20 or more.

Taste of Manila 2015 is held in cooperation with the Philippine Consulate General in Toronto.