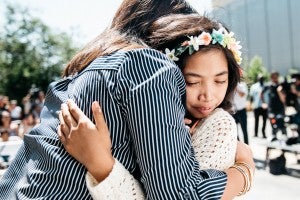 OAKLAND, California – It was like an emotional scene straight from a telenovela, or teleserye that Filipino viewers in the Philippines and other parts of the world follow ardently on leading Filipino channels.

Kristine (donor): “I am just so really happy to finally meet you, Mailyna. I am shaking. I am so happy and feel really lucky to be here today to see you.”

Mailyna (recipient): “I am now speechless. It is so amazing how someone like you who is so far away and you still gave it (even) though you did not know me.”

Mailyna was born with beta thalassemia major, a blood disorder that reduces the production of hemoglobin, the iron-containing protein in red blood cells that carry oxygen to cells throughout the body.

She needed to take daily medications and monthly blood transfusions to make sure her immune system functioned well, and only a bone marrow transplant from a match could cure her.

It was in April 2013, when Mailyna was10-years-old, when she and her family were told she needed a transplant. Immediately, the intensive search for a matching marrow donor began.

A donor was found and a perfect match confirmed in January, and the transplant date was May 8, 2014 at University of California in San Francisco. All of Mailyna’s pre-transplant and post-transplant care took place at Kaiser Permanente in Oakland.

“Mailyna’s disease is something that would necessitate a transplant immediately, or they are going to have problems,” disclosed Dr. Stacy Month, medical director of pediatric hematology and oncology that facilitated the transplant. 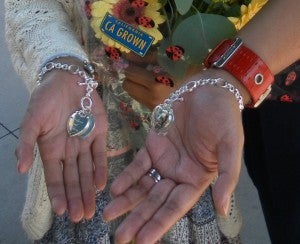 Bracelets with Mailyna and Kristine’s names.

Very quickly within a year of life, someone with her disease would need monthly blood transfusion and would need to go back to the hospital every three or four weeks for that and transfusions may lead to complications as iron comes up with the blood, Month explained.

“Although iron is good for the body, extra medication is needed to remove excess iron in different organs in the body. Although in her case, she had no brother or sister to match bone marrow, it was a great relief to learn that an unrelated individual from the same ethnicity was able to match and can be a donor,” Month said further.

Donor Palmero-Sydney’s is newly married. Her father is from Bicol while her mother is from San Carlos, Pangasinan. They moved to Saudi Arabia when she was a year-and-a half as his father worked for a living there. They moved to the U.S. in 2007 where she stayed mainly on the East Coast to work as an English teacher. 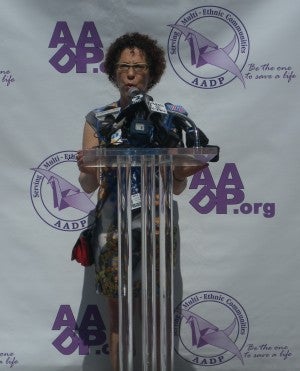 Palmero-Sydney was walking down the street from teaching work when she saw a poster at nearby Brown University, with pictures of multiracial children, encouraging potential donors of color between the age of 18 and 44 to register.

“I didn’t even think I was eligible because I am not eligible to donate blood due to my travel history,” Palmero-Sydney recalled. “I wanted to help, so I registered in April 2013, but I didn’t expect I would be called that November because I apparently had a match. In January 2014 I was called in at the Rhode Island blood center for further testing and was told we were a perfect match. And then I went in on May 7 to donate bone marrow.”

She depicted the bone marrow procedure itself as so easy that it hurt less than falling on the ice while learning how to skate for the first time. She didn’t really think about how big or important it was until she did Facetime with Mailyna, who could now play with her younger sister and other friends as she no longer had to be in isolation.

“That was the happiest moment of my life to see her face for the first time and now to see her in person is amazing. My body could not contain it. I am trembling not because I am nervous. I am just so very, very happy. Masyado akong tuwang-tuwa sa galak,” Palmero-Sydney described their first meeting.

Mailyna was beside herself and between sobs thanked everyone who was able to lend support.

“I want to thank her. I am just so happy to be here and feel so great that she can come up here to give an embrace. It was hard for me to be in the hospital for a long time at times in isolation,” a grateful Mailyna expressed in a later interview. “I am feeling a lot better than before I had the transplant. It was hard when we finally set all in place, I couldn’t go anywhere, I was always isolated. Everything has to be according to schedule.”

The donor and recipient were each given a bracelet with both their names engraved. They helped each other wear their bracelets, as Mailyna could now refer to Kristine as her “ninang sa dugo” (godmother in blood).

Alima Armas, mother of Mailyna, said they were just overwhelmed to learn that there was a match for her, “knowing that there was somebody out there that was willing to help and donate.”

Mailyna and her mother Alima Armas at the happy donor-recipient meeting.

“It was a blessing after going through many years of our lives being in the hospital every three weeks. Finally a chance for a normal life and a normal childhood, it is amazing,” Armas stated. “It is now a lot easier as she is more relaxed not as stressed as she has a little more time at school. She is a lot happier and rides her bike outside to get a lot of fresh air.”

As for Palmero-Sydney’s message, she urged everyone, especially persons of color, to get listed on the registry as potential bone marrow donors.

“To my fellow Filipinos, it is very simple to help a child in need just like what happened to us. And it just overwhelms me to think I was born in the Philippines, then to meet a Filipino American in need of a bone marrow transplant and discover that we are a perfect match. That is amazing to me. It feels great to help a fellow Filipino),” Palmero-Sydney declared.

This is also the same appeal of Ruby Law, recruitment director of Asian American Donor Program (AADP), as there are about 12,000 people searching for a match, and matching is based on ethnicity.

“A Filipino patient would need a Filipino donor. We really need more Filipinos to step up to help our own community. With a number of registrants in the United States, only about 1 percent of those registered are Filipinos,” Law rued.

“Now that we changed the registration process to just swabbing the inside of the cheek and filling out the form that takes only five minutes, it makes it a lot easier even for people at a street festival, churches, colleges, festivals, corporations, in front of supermarkets etc to just go to our booth to sign up. You don’t even have to donate blood sample,” Law explained.

The AADP facilitated the matching and successful transplant of bone marrow from Palmero-Sydney to Mailyna. It is an Alameda, California-based nonprofit organization that is reaching out to the Asian community in its humanitarian effort.

The AADP started 25 years ago with the mission to save lives mainly by educating community members about the shortage of ethnic non-Caucasians marrow donors and the importance of joining the registry to hopefully find a marrow match.

To learn more about AADP and its bone marrow drive, on to www.aadp.org .