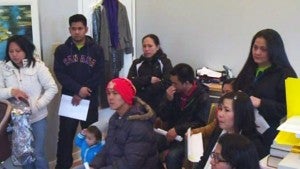 Some of the Filipino temporary workers allegedly cheated by employer Hector Mantolino. SCREENGRAB FROM CTVNEWS

HALIFAX, Nova Scotia –A Filipino businessman is undergoing a preliminary hearing, accused of immigration fraud for allegedly advising Filipino workers he hired to provide misleading and untruthful statements on their work permit applications.

Hector Mantolino, who owns and operates Mantolino Property Services Ltd., is facing 56 charges of immigration fraud under the Immigration and Refugee Protection Act, according to Global News.

He is also accused of giving false statements to the federal government about those workers’ employment conditions and rate of pay.

The preliminary hearing will determine if there is enough evidence for Mantolino to be brought to trial.

The Canadian Border Services Agency alleges that Mantolino victimized 28 temporary foreign workers, paying some cleaners from the Philippines as little as $3.13 an hour and telling them to lie about their wages if they wanted to stay in Canada.

Mantolino is also accused of setting up false businesses and submitting fraudulent documents to Service Canada, Citizenship and Immigration Canada and the Nova Scotia Office of Immigration.