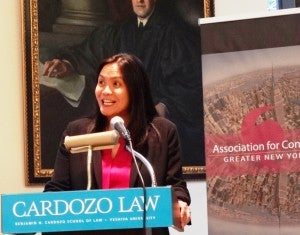 NYC Commissioner of Human Rights Carmelyn Malalis, an advocate for equality in the labor and employment practices, addresses the recently concluded conference of the Association for Conflict Resolution of Greater New York at Cardozo Law School. PHOTOS BY CAROL TANJUTCO

Malalis has a history of successfully combating discrimination and harassment in the workplace through her representation of employees from a variety of industries and income levels. Her dual role as Chair and Commissioner positions her to lead investigations of complaints of discrimination and retaliation in employment, housing and public accommodation.

Her office also will reach out, train and educate the public about the law and how to work with governmental as well as non-governmental organizations with similar functions. The public, she says, is not aware that New York law is broad and protects against discrimination, including employment discrimination based on credit history.

At the recently concluded annual conference of the Association for Conflict Resolution of Greater New York (ACRGNY) held at Cardozo Law School, Malalis stressed the need to rebuild best practices for mediation to avoid prolonged litigation that results in tenant eviction from housing and displacement of children in public schools.

Public housing in New York also raises difficulties for those with criminal convictions and just came out from prison. Malalis has submitted five bills for legislation, reflecting her initiatives to enforce equality, gender protection and non-discrimination in the workplace and in housing. The Commission has an advisory relationship with the New York City Council. 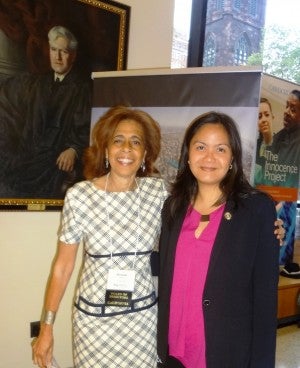 Lawyer Denise Shaw, President of the Association for Conflict Resolution of Greater New York, who volunteers her services to the Filipino American community, with Human Rights Commissioner Carmelyn Malalis.

Prior to her appointment, Malalis was a partner at Outten and Golden LLP, a firm she joined in 2004, where she co-founded the Lesbian, Gay, Bisexual, Transgender Workplace Rights Practice group, among other leadership roles, and won several awards and recognition of her peers.

Raised by her immigrant parents in New Jersey, Malalis earned her JD from the Northeastern University School of Law and received a BA in women’s studies from Yale University. She and her spouse live in Brooklyn with their two children.