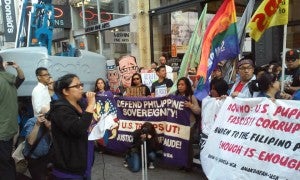 Just as global Filipinos concerned about China’s massive reclamations in the West Philippine Sea were preparing to hold their third annual Global Day of Protest against China’s imperialism on July 24, a “preemptive counter-demonstration” was held on July 19 in front of the Philippine Embassy in Washington, DC by Filipino American militants protesting U.S. imperialism in the Philippines.

The demonstration was sponsored by Bayan USA, “an alliance of anti-imperialist and progressive Filipino organizations,” which held its 5th National Congress on July 18-19, at the Catholic University of America in Washington, DC, following their “International People’s Tribunal on Crimes of the US-Aquino Regime,” which was held in the same venue.

Among the witnesses from the Philippines who testified at the “Tribunal” were Philippine Congress Representative Neri Colmenares of the Bayan Muna Party and Suara Bangsamoro spokesperson Amirah Ladasan. 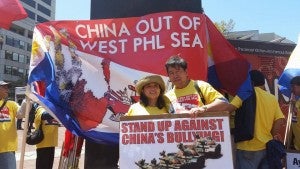 Columnist Rodel Rodis with demonstrators at UN Plaza in San Francisco during Global Day of Protest against China’s sea claims.

Comedian Stephen Colbert once said of Pres. George W, Bush: “He believes on Wednesday what he believed on Monday regardless of what happened on Tuesday.” What happened on “Tuesday” was that China became an imperialist power and the top foreign corporations exploiting the Philippines were no longer American (http://globalnation.inquirer.net/59379/chinas-mining-occupation-of-the-philippines#ixzz3hCwdt7pm) and the foreign navy that has recently invaded seven Philippine shoals and converted them into militarized man-made islands is also not American. As for “energy,” guess which navy is poised to seize Recto Bank with the 15 billion barrels of oil and quadrillion cubic feet of natural gas underneath it.

Ladasan should listen to what one speaker at a protest rally in front of the Chinese Embassy in Manila said: “China should stop its reclamation activities now and instead just engage us in the international tribunal if indeed they have the legal basis and evidence to do so. As it is China’s expansionist policy based on its 9-dash line theory is without legal, historical and moral basis. Every Filipino should defend our territory and exclusive economic zones, and Pres. Aquino should fortify our positions in the area to counter China’s aggressive acts.”

The speaker? It was not Loida Nicolas-Lewis of U.S. Pinoys for Good Governance (USPGG), not Roilo Golez of the Movement & Alliance to Resist China Aggression (MARCHA) nor was it Raffy Alunan of the West Philippine Sea Coalition (WPSC). 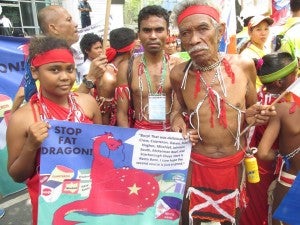 No, those words were uttered by Bayan Muna’s own Neri Colmenares, speaking at his group’s April 15, 2015 rally in front of the Chinese Embassy in Manila with placards that said “No To China’s reclamation of Mischief Reef!,” “China Out of Philippine Seas!” and “Assert Philippine Sovereignty!”

Bayan secretary general Renato Reyes added in another Bayan Muna press release that China’s land reclamation activities in the disputed Spratly Islands were an act of “robbery” and “an affront to our sovereignty.” He said: “Filipinos have the patriotic duty to oppose these aggressive actions as well as to call on our own government to defend our territorial integrity.”

As recently as July 23, 2015, Jose Ma. Sison, the founding chairman of the Communist Party of the Philippines, told Raissa Robles of the South China Morning Post that “China is obviously being greedy, claiming 90 percent of the South China Sea.” Sison told Robles that China’s territorial claims were “foolish” and “false” and added that “it would be like India claiming the whole of the Indian Ocean, or Mexico claiming all or most of the Gulf of Mexico.”

So what happened to Colmenares’ anti-China message when he arrived in the U.S. in July to speak to Bayan Muna’s U.S. supporters?

Someone must have informed Colmenares that the local Filipino American leftists do not oppose China’s imperialism. As early as May of 2012, when Balitang America’s Henni Espinosa interviewed Rachel Redondiez, then the national chair of Gabriela USA and former Secretary-General of Bayan USA, about whether her Fil-Am groups would join the protest rallies against China, she said no, because, she said, “It will only worsen the conflict between China and the Philippines.”

In the TV interview that was aired on Balitang America on May 9, 2012, Redondiez said, “When there is a conflict between siblings or friends, you usually want to start talking one-on-one before you bring in other people or mediators. China is not the true bully in this standoff. The China threat is being used by the U.S. to actually further trample on our national sovereignty.”

Rachel Redondiez was not just speaking for herself. Earlier, on April 16, 2012, Bernadette Ellorin, the Chairperson of Bayan USA, released the following statement: “Contrary to Washington’s line, the Chinese government is not flexing its military might to bully other countries in the region in order to expand its economic interests….Decades of U.S. military presence in the Philippines in the name of peace-keeping and anti-terrorism have proven that it is the U.S. troops, not China, that are guilty of pointing their own guns at Filipino civilians, raping Filipino women and children…”

When I asked my Facebook friend, Dante Simbulan, Jr., to explain the disconnect between the varying positions on China of Bayan Muna in the Philippines and its U.S. supporters like Bayan USA, Anakbayan and Gabriela USA, he explained that as far as the opinion of Fil-Am groups about China is concerned, it was “their prerogative.” That explains it all then.

When China invades the Ayungin Reef, Recto Bank and Pag-Asa Island and Filipinos all over the world rise up in righteous anger against China, we know that there will be at least one group of Filipino Americans who will not join the protests because it’s “their prerogative.”