China’s mining occupation of the Philippines 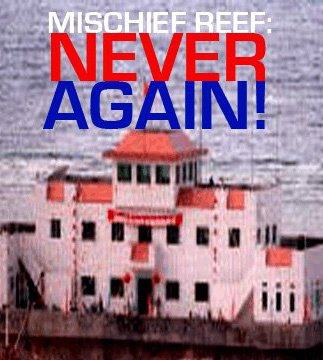 For example, one of China’s vast army of mining companies operating almost under the radar in the Philippines is located near the Scarborough Shoal in the coastal town of Masinloc where China’s Wei-Wei Group has set up a US$100 million nickel processing plant. In nearby Botolan, Zambales, China’s Jiangxi Rare Earth and Rare Metals Tungsten Group Company Limited operates a US$150 million nickel exploration and cobalt processing project.

As the Asia Sentinel reported on November 12, 2012 (“China’s Filipino Gold Rush”), “With an estimated US$1 trillion in untapped mineral resources in the Philippines, according to the Mines and Geosciences Bureau, Chinese mining companies, many of them operating illegally, have been exporting gold, nickel and other precious minerals out through the island country’s porous coastal ports, where there are no customs officials and plenty of bribable officials to turn their eyes the other way.” 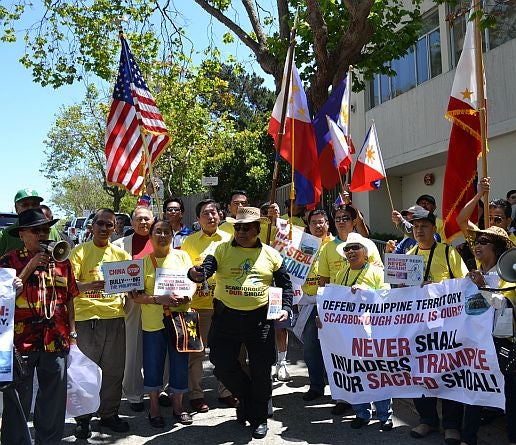 With its occupation of the Scarborough Shoal (what China calls “Huanyin Island”), smuggling precious metals from the Philippines to a China base will be even more convenient especially after it is transformed into a four story fortress, as China did with the Philippines’ Mischief Reef, located just 75 miles from Palawan, which China occupied in 1996.

The Asia Sentinel’s investigation reported that “as of now, of the gold registered as leaving the Philippines, only 3 percent of the exports are registered with customs officials… The other 97 percent arrives in Hong Kong without being taxed by the government in Manila, resulting in a massive tax loss.”

While that 97% of the gold is leaving the Philippines illegally, it is somehow legally entering Hong Kong as HK trade statistics showed that “gold consignments imported from Philippines into Hong Kong had been declared,” the Sentinel added.

In April of 2011, Pacific Strategies and Assessments (PSA), a company supplying foreign embassies and corporations in Manila with intelligence and business climate reports, released a study titled “Exploitive Chinese Mining in the Philippines” which reported that the incursion of Chinese mining firms into the Philippines has had a disastrous effect on the Philippine environment.

“While few are surprised over the assertiveness and penetration of Chinese mining investors, there is substantial evidence of unaccountability, misconduct and corruption in many Chinese mining deals,” the PSA reported. 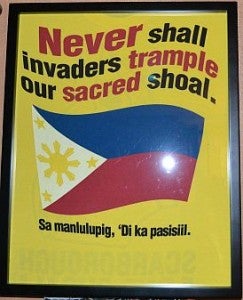 These firms do not “deliver correct compensation for environmental damage and value of minerals extracted from devastated mining areas….Chinese mining companies have a reputation for poor adherence to environment standards, especially with regard to small-scale mining projects,” the report added.

China’s mine safety record is the worst in the world. More than 2,600 Chinese miners died in mining accidents last year. While China accounts for 40% of the world’s global coal output, it accounts for 80% of mining deaths in the world.

In 2008, the Philippine Department of Environment and Natural Resources admitted that at least 3 million metric tons of various mineral ores were brought into China that were untaxed in the Philippines. 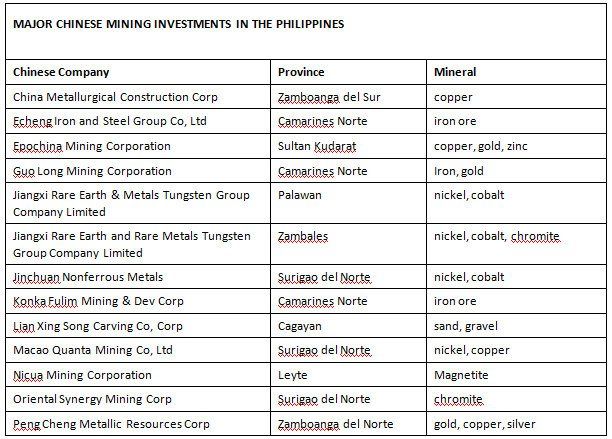 The PSA reported that “the reality is Chinese mining firms are not playing by the same business ethics, rules and practices which Western mining firms are expected to follow, nor is the Philippine government holding China to the same benchmarks chiseled into law and applied to Western firms.”

Chinese mining firms have been able to subvert Philippine mining laws that set high standards for environmental protection and just compensation by exploiting a law for small-scale mining by Filipino-owned cooperatives. They hide “under the cover of domestic small-scale miners to bypass Philippine mining laws and protocols as well as avoid the large capital requirements, fees and taxes associated with large-scale mining,” the report noted.

While American firms are restricted by US law from bribing local officials, Chinese laws do not discourage such practice. “Black cat, white cat, it doesn’t matter as long as it catches the mice,” Deng Xiao Ping famously said and this has been the guiding principle for China’s mining firms in the Philippines.

But there is also a national security concern which may be greater than just the loss of significant tax revenue for the government or the scorched earth devastation of the Philippine environment. 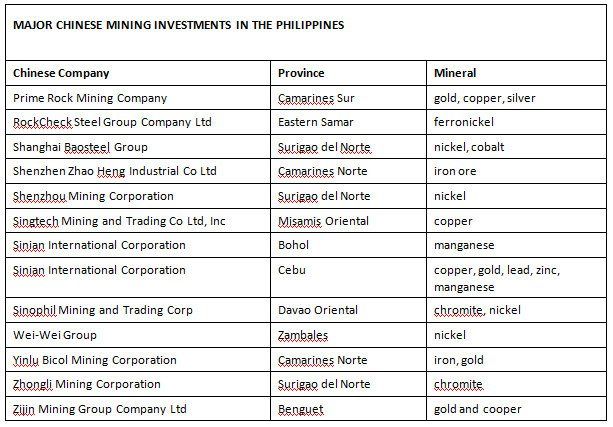 Nickel super-alloys are a critical component in advanced jet engines and are used in the engines of 5th generation jet fighters.

According to the 2006 Minerals Yearbook of the United States Geologic Survey (USGS): “The F-35 Joint Strike Force Fighter project is projected to include production of about 3,000 aircraft and 6,000 engines that would use 3rd generation nickel-based super-alloys. The F-22 Raptor is expected to add another 700 aircraft.”

China’s invasion of the Philippines’ Kalayaan Islands in the Spratlys, with its estimated 50 billion barrels of oil reserves, may likely be accomplished with the heavy-handed use of China’s People’s Liberation Army jets, made with nickel-based super-alloys extracted from the Philippines.

According to “Troubled Waters” documentary producer/director Vince Wade, “a military clash is a possibility but most people don’t realize these conflicts are essentially economic warfare, which is already underway,” Wade said.

“China appears to have a plan to use business and trade to gain de facto control of the economies of the Philippines and other Southeast Asian nations through domination of the energy, mineral and telecommunications sectors,” Wade added.