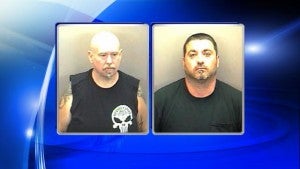 NEW YORK CITY — Two North Carolina men were arrested Wednesday, July 22 on charges that they carried out a contract killing, allegedly leaving a woman dead on a garbage pile in the Philippines before each collected a portion of their $35,000 fee.

An indictment unsealed in U.S. District Court in New York City charged Adam Samia and Carl David Stillwell in the early 2012 killing of a Filipino woman.

Prosecutors said the woman, identified in court papers only as “Victim-1,” was shot multiple times in the face before she was dumped on a pile of trash.

“After their contract killing, they allegedly covered their tracks by conspiring to launder the blood-money back to the United States,” Manhattan U.S. Attorney Preet Bharara said in a release.

He said the men were arrested in Roxboro, North Carolina, after the U.S. Drug Enforcement Administration played a key role in the probe, with cooperation from local and federal law enforcement officials.

Samia, 41, and Stillwell, 47, were scheduled to make an initial appearance Thursday in federal court in Greensboro, North Carolina. It was not immediately clear who will represent them in court.

Each was charged with conspiracy to kidnap and murder in the Philippines, discharging a firearm in furtherance of a crime of violence and conspiracy to launder the proceeds of committing murder-for-hire. If convicted, they could face life in prison.

The person who allegedly hired the men was not named in the indictment, nor was the reason.

Prosecutors said Samia advertised himself as a “personal protection/security industry” professional who had worked as an “Independent Contractor” for clients in the Philippines, China, Papua New Guinea, the Democratic Republic of the Congo and the Republic of the Congo. They said he claimed he had training in tactics and weapons, including handguns, shotguns, rifles, sniper rifles and machine guns.

Stillwell’s resume claimed he had training and experience in the field of information technology and had worked at a North Carolina firm that provides firearms training, prosecutors said.

Prosecutors said the men agreed in 2011 and early 2012 to carry out contract killings in exchange for monthly salaries and bonus payments for each victim.

Prosecutors said that after doing surveillance on the Filipino woman in the early weeks of 2012, the two men killed her on Feb. 12, 2012, and then each man collected a portion of the $35,000 fee before sending the money to the United States in increments of less than $10,000 so it was less likely to be noticed. They said the men returned to North Carolina in late February or early March of 2012 and have lived there since.

The indictment quoted the text of several emails between an uncharged co-conspirator and Samia, including one in which Samia on Jan. 23, 2012 requested $3,000, saying Samia and Stillwell were “just about broke” after spending money on an apartment, a car, food and taxis. Still, he boasted that he got a landlord to include a bed and air conditioning in the rent, showing they were “trying to save” where they could, the indictment said.

According to the indictment, they were criticized in May 2012 by the co-conspirator, who told Samia in an email that they did “one sloppy job which could have endangered everyone….”