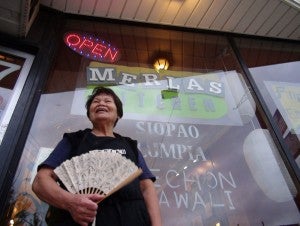 CHICAGO — North Park was originally a Swedish community in Chicago, and it has evolved into a diverse neighborhood of Latinos, Middle Easterners, Koreans and Eastern Europeans, among others. There are two universities in the area: North Park University and Northeastern Illinois University.

Merla Birondo knows the neighborhood very well. She lives in the area, and she retired from the nearby Swedish Covenant Hospital as a central-service technician. She was already providing food for friends and relatives when she was working, so when a restaurant space near her house became available, she opened Merla’s Kitchen in 2009, right after her retirement.

Birondo was born in Tandag, Surigao, in the Philippines. At three years old, she became an orphan. To this day, she does not know how her parents died. Growing up in Nabunturan, Davao, she was shuttled between an aunt and an uncle several times. She moved to Manila at the age of 14 to live with distant relatives 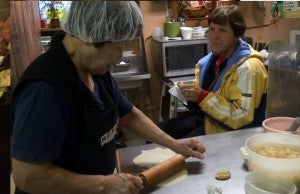 Because she had to fend for herself at an early age, Birondo had no choice but to learn how to cook by observing others. “I must have been four when I had to climb up to reach the stove,” she remembers. She had a natural knack for knowing what flavors would go great together in a dish, as well as adding a key ingredient that would make it her own.

Birondo cooks by memory. Her dishes are fresh and made from scratch. All the chopping and cutting are mostly done by hand. She believes that the hands are the best tools, along with a sharp knife and few basic nonelectric equipment. She refuses to use a food processor.

She emphasizes less fat and leaner meats. For example, Birondo buys chicken that is already skinless and boneless. If it is not up to her standards, she will further cut away a layer of fat and skin off what is left without sacrificing flavor.

Sally Martinez, who lives in the neighborhood, is a big fan of Birondo’s empanada (meat pie). “I love every bit of it!” she exclaims. “The dough is thin, and it has a lot of filling.” Empanadas are made to order and rolled by hand at Merla’s Kitchen. They are delicate and meant to be eaten right away.

Birondo has observed that the popularity of her dishes is dependent on Chicago’s extreme weather conditions. When it is cold, customers order aroskaldo (rice-chicken soup). In contrast, when the weather is hot, halo-halo (cold refreshment or drink) is everybody’s favorite.

The star attraction at Merla’s Kitchen is Birondo herself. She establishes a homey atmosphere with her friendly personality. Her customers in turn love her. Roberta Hemmerling, a retired teacher, learned about the restaurant from a Filipino friend. She remarks, “Merla has a sincere personality that shines through her cooking. She is 100 percent pure natural!” 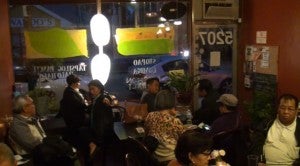 For people who want to be good cooks, Birondo advises, “Written recipes are just guidelines. Rely on your own taste buds to make food.” Practice and repetition are very important. She adds, “If it doesn’t go well one time, adjust and try again. If you won’t eat it, no one else will.”

Her life is not all in the kitchen. Belonging to a women’s bowling league, she has had several awards and trophies as a high scorer. Her garden has provided vegetables, such as eggplants, tomatoes, ampalaya (bittermelon) and hot peppers, to Merla’s Kitchen.

Merla Birondo considers her four daughters and seven grandchildren as her real treasures. Her early life might not have been ideal, but it made her strong and independent. But she never stops dreaming. “Watch out,” she warns, “Merla’s Kitchen will soon be expanding!”

For more stories on the Filipino diaspora, go to PositivelyFilipino.com .